Believe it … or not! 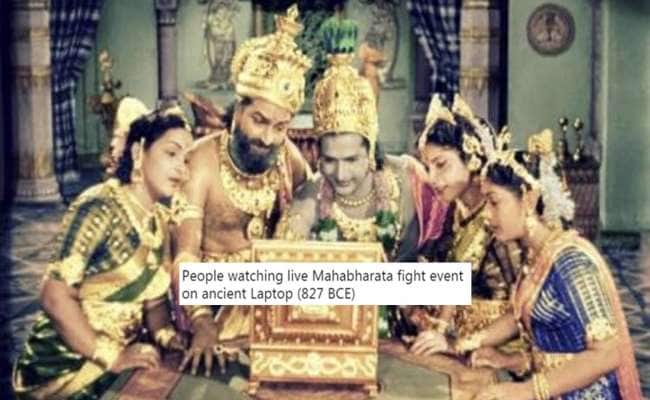 Of course internet existed in the time of Mahabharata

Love the classical art and movie clips evidence by tweeters.

Do you know that Sri Lankans believe that they invented the air craft as king Rawana kidnapped Sita and flew back to Lanka on a plane called “dandu monara”? “Monara” is peacock in Sinhala. SriLankan air lines uses the peacock symbol because of this myth I think.

I believed that when i was a kid.

You know, " Wariyapola" in the kurunegala district is supposed to have been the airport.

Yeah I just read about it today…

At least the writer didn’t bwlieve it.

I reckon it was space aliens.

So what made you stop believing it?

stopped believing does not mean disbelieving.

Waiting for some hard evidence. But i wouldn’t be surprised if it has some truth in it. If the ancient Chinese could send people up in kites, I don’t see why the ancient sri lankans cant do something similar or better.

Well, the human history spans around 300,000 thousand years. Although the existing writing systems are only about 5,000 years old.

Does that mean the human beings were capable of writing stuff only about %1 of the time? That is not realistic - isn’t that so?

The entire human race gets re-cycled at the end of Kalpa and starts from zero yet again. So throughout the 300,000 year timespan the human race re-discovers the wheel, the bullock-cart and finally the flying machine starting of a new Kalpa. The history repeat in cycles.

Search for “lost ancient high technology” and you will come across heights of early technological feats some impossible even with presently avaiable tech. The way the Kalpas end is quite catastropic leaving behind only ashes.

In addition, there are countless world systems (Sakwala). In each world system a Buddha and a Sakwithi emerges in a special region. Right this moment a Buddha somewhere is conducting the Dhammachakkapawathana Sutta to the universe from a hill top announcing his arrival.

The interleaving period a Sakvithi emerges. A Sakvithi is a king and also a dynasty of kings. When the Buddha conquers the super-mundane world, the Sakvithi conquers the mundane.

The last Kalpa ended with a big bang and the ruling Sakvithi was Ravana. The dynasty is also spoken of by Plato as Atlantis. The aircraft spoken of in the legend of Altantis and the Wimana spoken of in Indian texts are the same.

Before the Kalpa eneded a massive war erupts. The scale of the destruction is huge even triggering thermo nuclear blasts that submerge parts of the island under sea.

However, as I said before, its only a hypothesis requiring some investigation.

Are you saying sri lanka is or was Atlantis?

Are you saying sri lanka is or was Atlantis?

Any evidence for this ?
And i dont mean textual references.

Any evidence for this ?
And i dont mean textual references.

The limited evidence I have spoken. Although since it is only hypothesis requires further investigation.

Any body doing that?

Any body doing that?

I do not know unfortunately. The purpose of this conversation was to show the idea of “Dandu Monara” is not that crazy after all.

I read a book entitled “The Man Who Loved China” by Simon Winchester which told the story of Joseph Needham. In the telling of the story there is much brought to light on the remarkable inventions of the Chinese, most of which are still unknown by much of the world. The West arrogantly takes credit for inventions that were predated by the Chinese by hundreds of years, sometimes more.

Maybe there were already laptops and ISPs before the Permian-Triassic Extinction and we just haven’t found any evidence yet!

Actually, a wise man once said, “The internet is a series of tubes”.

Buddha said that there were many Buddha’s before him.
It does not mean Buddha’s re-discovery of Dhamma is any less importatant.
There is no end to the possible dicoveries in a conditoned world.
I think the biggest discovery is the unconditioned. (Nibbana)