Is there an honorific for bhikkhunis?

I can’t recall ever hearing someone refer to a bhikkhuni as “bhante”.

Can it be used for bhikkhunis, if not is there another honorific that can?

The Pali title Ayya (=Sanskrit Arya, i.e. Madam) is often used for bhikkhunis, especially in “newer”/convert Theravada and early Buddhist demographics which have adopted this term from the Pali texts.

According to my informants, this term is basically not used in Sri Lanka, where another title, mehenin-wahanse, is used for an ordained nun. I have asked around as to the origin of the word meheni, one theory is that it is a Sinhalese Prakritisation of term samani, i.e. a female samana. “Wahanse” is “Venerable”. This term is very old, from Sinhala literature.

It is not normal for a bhikkhuni to be called Bhante.

Also, ayya is used for men as well, and occasionally monks, so it is fine to use it for all monastics!

Ayya also means “older brother” in Sinhala, and is usually used in place of a name for any male that is in the age range to be your brother. That may be why it never caught on in Sri Lanka.

Ayya has that meaning in Tamil too.

I did some Zoom for India over lockdown and my host very meticulously “edited” my title to Arya from Ayya.

A lot of peope in the Australian SL diaspora also hear “ayah” i.e. a female maid/nanny for “ayya”. I have some funny stories about laypeople being shocked to hear nuns addressed this way…i.e. outrage that the nuns were being called maids haha (some explanation was required).

Sinhala actually has the word “arya” with meaning “Madam” but people don’t normally join the dots.

“Aryika” is also a term for a Jain nun today.

Bhante @sujato, I thought that “sister” is used for active orders in Catholicism, and that Venerable is used for cloistered orders like Carmelites, hence why we got Venerable as an English default (but also conveniently in contrast to the more familiar associations of term “sister” or “brother” in some Buddhist languages and communities).

So it sounds like the answer is “not really”.

Can it be used for bhikkhunis, if not is there another honorific that can?

I thought Bhante was gender neutral? From wikipedia:

Bhante is a gender-neutral term, and may be used to address both monks and nuns. It is the vocative form of the word bhadanta , which confers recognition of greatness and respect. 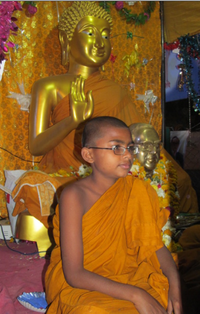 Bhante (Pali; Burmese: ဘန္တေ, pronounced [bàɰ̃tè]; Sanskrit: bhavantaḥ), sometimes also called Bhadanta, is a respectful title used to address Buddhist monks and superiors in the Theravada tradition. The term religiously means "Venerable Sir." Bhante is a gender-neutral term, and may be used to address both monks and nuns. It is the vocative form of the word bhadanta, which confers recognition of greatness and respect. In English, the term is often translated as Venerable. The Nepali terms bar...

Yeah, Wikipedia is wrong on more than one count here.

Bhante is both nominative and vocative.

And not traditionally used for nuns.