I have only formally started to study Jhanas recently. Does anyone know of suttas that talk about nibbana or arhantship without formless jhanas? I also heard from a Jhana teacher that formless jhanas cannot be learned or taught, they can be remembered.

In the past while listening to the famous Heart Sutra “form is emptiness (śūnyatā), emptiness is form” I did not dare to ask, where is the formless in this statement? Does it seem incomplete to anyone?
This you tube dhamma conversation with Delson Armstrong explains various yogic samadhi jhanas and Buddha’s own experiment on ariya and anariya jhanas. 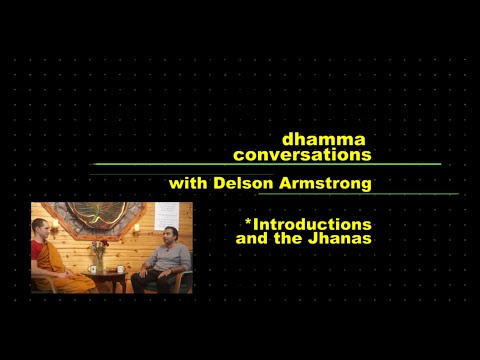 Does anyone know of suttas that talk about nibbana or arhantship without formless jhanas?

Mn149
When you do truly know and see the eye, sights, eye consciousness, eye contact, and what is felt as pleasant, painful, or neutral that arises conditioned by eye contact, you’re not aroused by desire for these things.

Someone who lives unaroused like this—unfettered, unconfused, concentrating on drawbacks—disperses the the five grasping aggregates for themselves in the future. And their craving—which leads to future rebirth, mixed up with relishing and greed, looking for enjoyment in various different realms—is given up. Their physical and mental stress, torment, and fever are given up. And they experience physical and mental pleasure.

An7.45
“Mendicants, there are these seven prerequisites for immersion. What seven? Right view, right thought, right speech, right action, right livelihood, right effort, and right mindfulness. Unification of mind with these seven factors as prerequisites is called noble right immersion ‘with its vital conditions’ and ‘with its prerequisites’.”

When some English commentators like us contradict earlier pali sub commentaries then we should give up our ego and let these later generation medieval arahants speak, we should prioritize their views over our views we are no pali scholar, we are no meditation master, we are no arahant and 1000 years after these medieval monks died we still weren’t born yet let alone knowing shit, let alone knowing how to interpret suttas and vinaya so pretending we know something when actually we know nothing won’t help our case it would increase our ego,selfishness and feeling that we are superior to these medieval monks that we know better than them so let’s give the job of interpretating suttas and vinaya and even pali commentaries to those who knows it well like earlier arahants ,2nd generation arahants, 10th generation arahants or monks who are no arahants but whose lineage or tradition could still be traced back to these arahants, we don’t know their teacher’s instructions better than they do, late commentators like us should not pretend that we know how to interpret pali commentaries let alone suttas, just give the job to earlier commentators who knows the context better, whose lineage could still be traced back to arahants,

the fact is the living meditation tradition stops at 10 ce so not even ajahn chah lineage could still be traced back to medieval arahants let alone ajahn brahm, ajahn thanissaro and others, without being disrespectful they are lovely, they should not stop teaching but we should not rely on them too much ,they are good but when they disagree with even earlier ajahns then we should know who to hear

If my English is better than now I could share more but English is a very difficult language, I hope google translate could be perfect in the future

In the past while listening to the famous Heart Sutra “form is emptiness (śūnyatā), emptiness is form” I did not dare to ask, where is the formless in this statement? Does it seem incomplete to anyone?

This famous saying is the start of a passage applying emptiness to the five aggregates. Form is the first one, then there’s feeling, perception, volition, and consciousness, which are considered formless.

@cpatton
I see what you mean. Yet I get confused when emptiness is also spoken as sunnyata or voidness in Mahayana; isn’t Sunnyata synonymous with realization of Nibbana in EBT?

Also, I see all five skandhas in daily life as mostly form-based that is embodied five sense based feeling, perception, formation, and consciousness (conditioned by form) as we live in the form dimension. All are changing and not to be taken as me, mine or myself.

I will not comment about jhana, just about the heart sutra.

The emptiness (sunyata) in heart sutra is not in jhana context. It is about the perception of anatta to the five aggregates, also to the six senses, etc.

If one realize this fully, it is nibbana. But just taking a glimpse is enough for stream enterer.

Does anyone know of suttas that talk about nibbana or arhantship without formless jhanas?

I also heard from a Jhana teacher that formless jhanas cannot be learned or taught, they can be remembered.

Buddha learnt them from Alara Kalama and Uddaka, Rāma’s son.

And what, Ānanda, is the path and the practice for giving up the five lower fetters? It’s when a mendicant—due to the seclusion from attachments, the giving up of unskillful qualities, and the complete settling of physical discomfort—quite secluded from sensual pleasures, secluded from unskillful qualities, enters and remains in the first absorption, which has the rapture and bliss born of seclusion, while placing the mind and keeping it connected.

Also, I see all five skandhas in daily life as mostly form-based that is embodied five sense based feeling, perception, formation, and consciousness (conditioned by form) as we live in the form dimension.

In the 5 aggregate context as in Heart sutra, form means whatever is physical.

In the 3 realms of existence context which you referred to above as the form dimension, there’s the sensual realm, form realm and formless realm. Sensual realm is the realm of 6 devas, humans, animals, ghosts, asuras and hell beings. Form realm is the 16 Brahma realms, of which one needs to attain to the Jhanas to be reborn there, and in particular 5 of 16, the pure abodes are reserved for non-returners. Form realms differ from sensual realms. What I had heard from Dhamma talks is that there’s only the sense base of mind, eye and ear, there’s no gender, no sex there. Much more refined and better happiness compared to devas.

4 realms are the formless realms which one can be reborn there by attaining the formless Jhanas. As implied by the name formless, there’s only mind, no body.

So we are not in the form realm, we are in the sensual realm.

And what, Ānanda, is the path and the practice for giving up the five lower fetters? It’s when a mendicant—due to the seclusion from attachments, the giving up of unskillful qualities, and the complete settling of physical discomfort—quite secluded from sensual pleasures, secluded from unskillful qualities, enters and remains in the first absorption, which has the rapture and bliss born of seclusion, while placing the mind and keeping it connected.

Mn44
Unification of the mind is immersion

Note that I have bold the jhana factors we see that the sequence is piti → sukha → sammasamadhi, this further is strengthen by this sutta

Dn10
2.12.4Seeing that the hindrances have been given up in them, joy springs up. Being joyful, rapture springs up. When the mind is full of rapture, the body becomes tranquil. When the body is tranquil, they feel bliss. And when blissful, the mind becomes immersed.
2.13.1Quite secluded from sensual pleasures

Let’s look at the Pali for the sake of transparency

All are same between the 2 suttas the difference is instead of sammasamadhi the second one said samadhi only, right after piti and sukha

Now do you think that using only the mind one can hear sound or not ?

And The other mystery is even though we can assume that yasa have Jhana, such an assumption may be wrong because In the very end just before enlightenment he still enjoy 5 senses pleasures now previously we had a discussion about past Jhana but even if yasa have attained jhana in his past life he may have already lose it because in the end he still enjoy the 5 senses pleasures, while logically if one attains jhana there’s no way for them to enjoy sensual pleasures unless they lose their jhana and this is further strengthen by the Buddha in this sutta

This is wrong and right kind of meditation according to sutta

And what kind of meditation did he praise? It’s when a mendicant, quite secluded from sensual pleasures,

Hindrance is the nutriment to ignorance thus extending dependent origination

An10.61
“Bhikkhus, this is said: ‘A first point of ignorance, bhikkhus, is not seen such that before this there was no ignorance and afterward it came into being.’ Still, ignorance is seen to have a specific condition.
“I say, bhikkhus, that ignorance has a nutriment; it is not without nutriment. And what is the nutriment for ignorance?
You should say: ‘The five hindrances.’

But Buddha said hearing the dhamma alone would suppress the hindrance

Sn46.38
Mendicants, sometimes a mendicant pays heed, pays attention, engages wholeheartedly, and lends an ear to the teaching. At such a time the five hindrances are absent, and the seven awakening factors are fully developed.

Do you think one get Jhana while hearing the dhamma ?

(Edited to add: There is a lot of information on Jhana meditation and it isn’t all true to everyone’s experience. Searching for information on formless Jhanas will yield answers from anyone without meditation experience can experience them to only Non-Returners and Arahants can experience the 8th and 9th formless Jhanas. Some of the confusion may arise from what V Bhikkhu Ānalayo says is the difference between the perceptions and the attainments. He teaches the formless perceptions and they are onward leading.) It’s best to try it for oneself. Cūlasuññatasutta Not sure how to create a text block; here is a link.

Thank you for that clarification. I am still wondering how one actually realizes nibbana in the context of heart sutra… is it realization mostly by chanting, koan and some form of meditation?

Thanks for all your helpful references and your views. I am taken by the story of Yasha, as the first lay disciple going forth after getting fully enlightened just by listening to the Dhamma from the Buddha. Wonder if ‘Buddha’ held the perfect mirror of pure awareness and stainless dhamma at the right moment of ‘samvega’ for Yasha. Just a thought…

ps. Sorry to stir up something, but I feel we can express ourselves here without disparaging speech to self and others.

The context of Heart Sutra is actually the same with most of Buddha’s teaching.

Heart Sutra is telling us that there is no “intrinsic existence/ self nature” in all phenomena.
What is all phenomena?

Five aggregates, 6 sense base, 18 sense elements, and so on.

How to do this, we need to reflect and meditate. And attain jhana if you want.
And then observe phenomena. Buddha said that they are impermanent, suffering, empty, and not self.

Observe anything that arise without grasping at them. And observe that they arise, endure, and cease.
And we will understand.