This is a Buddhist monastery dating back to the Anuradhapura era. Two years ago the archeological department of Sri Lanka started the excavation work sponsored by the private philanthropy of the Bauddhaloka foundation.
According to Mahavamsa, the Kurundavashoka Monastery was built by king Kallatanaga (109-104 BC) and records various donations by king Aggabodhi I (575-608) and king Vijayabahu I (1070-1110).
Mr J. Penry Lewis, a Government agent, made a detailed account in his The Manual of Vanni District in 1895 about this site. (see report below).
Baudhhaloka foundation and the archeological department invited Bhante Sujato @sujato to witness the ceremonial laying of the Buddha’s relics to complete the restoration work of the stupa on the 12th of June 2022. (two days ago).
Although this auspicious event had to be cancelled due to the noisy protests organised by some Tamil politicians (MP) who are threatened by the restoration of Buddhist sites in the Northern part of the island, he managed to visit the site on the following day. Here are some pics of the visit. 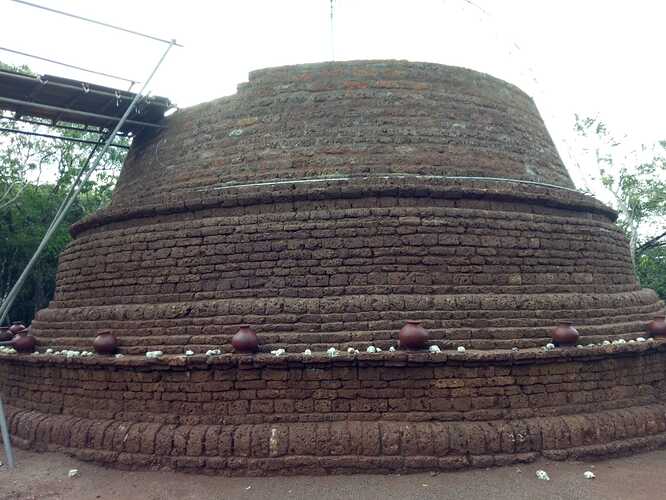 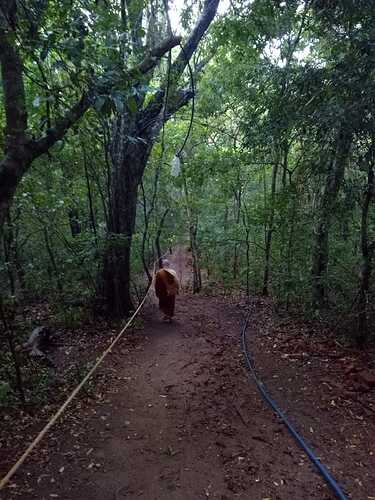 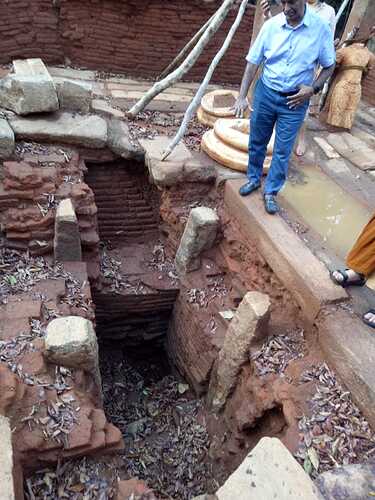 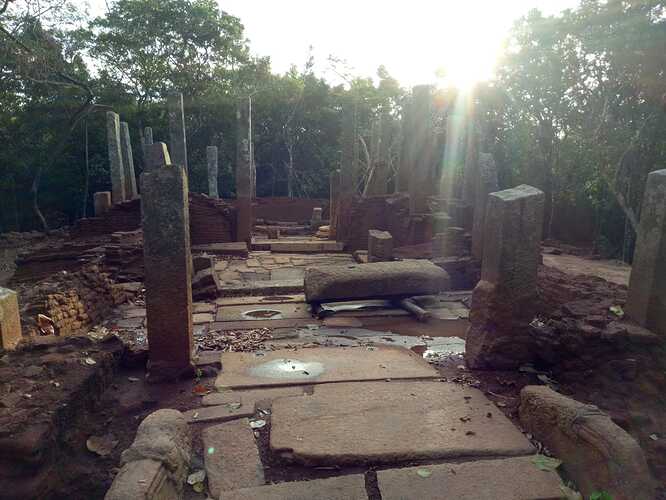 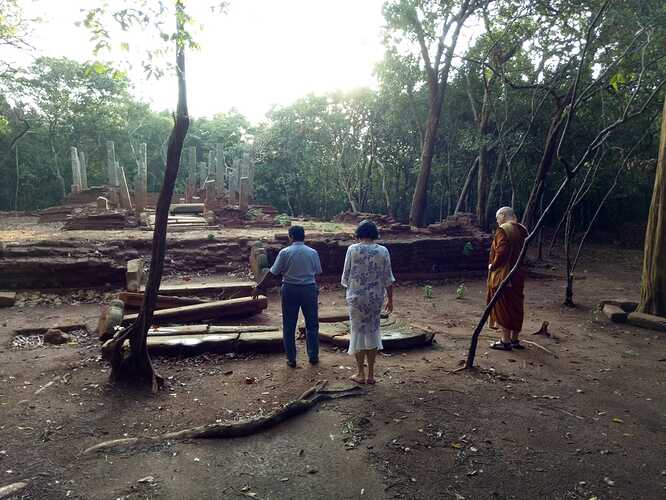 The Manual of Vanni District Mr J. Penry Lewis, Government agent, Northern Province 1895.
The most extensive ruins in the whole Province are those at Kuruntanurmalai, or Piyangala, at the south end of the embankment of the Kuruntankulam tank. Mr. Parker thinks that —

This is the spot that is said to have been visited by Buddha on his second journey to Ceylon. A flight of stone steps led from the end of the bund to the summit of the hill. The top of the hill is flat, and of elliptical or oval shape. Round the side facing the bund, and possibly round all the summit, a retaining wall of squared blocks of the hard altered gneiss has been built to a height of 7 ft. or 8 ft. at a batter 1/2 to 1.

There are several ruins on tho hill. and at the back of tho northern part of the bund ; but they are all dilapidated, more through wilful defacement by the later Tamil occupants than by the action of time. About half-way between the southern end of the bund and the southern most bund is the site of an ancient temple, with a stone five-headed cobra.

Behind the bund there are the ruins of at least three temples or buildings of importance, such as at Madukanda, Mahakachetkodi, Iratperiyakulam, &c., having three parallel rows of squared stone pillars ; in one case there had been at least three of these rows. At one place there were standing two doratupla stones covered with carved figures of guardian goddesses, exactly like those at Madulcanda, but they were more than half buried, and the space between them, where there is evidently a flight of steps, is completely buried, with a tree growing in the middle. (Stones were removed from Kuruntanurmalai (in 1858 I believe) to build the Mullivaykkal temple. The doorway of that temple is constructed of carved stones from that site.)

One of the two makara torana stones which form the bahistiacle of the steps as at Madukanda is lying on the surface turned over on its side, and the other is probably lying buried somewhere near. On digging here the top step was seen, and the whole are probably in- situ. There is also a large inscribed slab. In another place are a roughly-executed figure of a bull, the head broken off but forthcoming, and a figure representing a worshipper. These figures evidently belonging to the Hindu temple which was built after the Tamil invasion.

There is also a large heap of bricks, apparently the remains of a dagoba. and there are pillars on all sides.

The town or large village that was built on the low side of the embankments, and traces of which are to be seen in the fragments of pottery that line the beds of the smaller water-sources is termed Kurungama in the inscription. The Tamil name was Kuruntanur. The later Tamil residents built a temple here, and they demolished the vihare built by Sanghabodhi and other buildings, and removed nearly all the bricks and the stonework to it. It is not known when the tank was breached and the town was abandoned; all that can be said is that there is nothing to indicate that the place has been inhabited since the thirteenth or fourteenth century.

Kuruntankulam.—Inscription by Mahindu III. (937-1013 a.d.), who visited the tank with his mother (?) and daughter in the eighth year of his reign. It is on a large slab, and is one of the largest inscriptions in the Island, but for the most part now illegible, containing —

Chiefly a series of rules like those on the Mihintale tablets, to be observed by the monks who were stationed here, but a few references of more general interest are included in it, and allusion is made to the king’s great lake (which would appear to be Tannirmurippu), and also to some disputes that were having an injurious effect on the cultivation. The king, who states that he himself was the writer of the inscription upon the stone, and who appears to have had some doubts regarding his orthographical powers, commands that those rules ” shall continue in force, and not be upset or reconstructed if letters are missing.

The town that existed on this site is termed Kurungama in the inscription.

This slab is now in three pieces. The letters on it are very fairly and evenly cut, each one separated by horizontal lines cut as straight as if they had been done with a ruler, and there is a raised border round the stone.

Manual of the Vanni districts (Vavuniya and Mullaittivu), of the Northern Province, Ceylon (1895)