Lay practise in the 'early' days

Apologies if this has been asked before but is there much text or accounts of any kinds that deal with lay followers and their practise from an ‘early’ period?

I can’t recall a particular sutta that does that explicitly. The initial action by laypeople is expressed in the suttas by a stock passage of going for refuge, e.g. this from Ven Thanissaro’s translation of it:

“Magnificent, Master Gotama! Magnificent! Just as if he were to place upright what was overturned, to reveal what was hidden, to show the way to one who was lost, or to carry a lamp into the dark so that those with eyes could see forms, in the same way has Master Gotama — through many lines of reasoning — made the Dhamma clear. I go to Master Gotama for refuge, to the Dhamma, and to the Sangha of monks. May Master Gotama remember me as a lay follower who has gone to him for refuge, from this day forward, for life.”

There is also a sutta where the Buddha says that one is a layfollower if one has gone for Refuge, and one is a virtuous lay follower if one also practices the five precepts. So firmly establishing one’s refuge and one’s virtue seems like a good start. The importance of Right View, the first limb of the Noble Eightfold Path, is also emphasized often.

I hope some of that helps.

Thanks for this. Apologies, I should have articulated my original question better - what I’m looking for is historical accounts, that paint a picture of lay life in the early periods. In a sense, the way both the Theragatha and Therigata are collections of personal accounts, was wondering if there’s any extant stuff out there from a lay perspective. Although, I expect there being very little or none - still thought I’d ask…

The only thing that comes to mind is a book I still have not read, but I’d imagine would provide some useful info, though* probably not specifically Buddhist: Daily Life in Ancient India: From 200 BC To 700 AD by Jeannine Auboyer. There are probably other books on the subject and beyond that there are always academic journals.

Probably still not what you’re looking for, but two publications come to mind:

Samuels - Views of Householders and Lay Disciples in the Sutta Pitaka

There are many suttas on the topic of observing the uposatha.

I believe these provide a key insight on what was practiced as Buddhism by the lay people who wanted to go beyond only supplying the Sangha with the four requisites.

Also, it shows us that while the practice of retreats by layfolk cannot be traced back to early Buddhist community the uposatha provided opportunity for those who felt inspired by the teachings and teachers to emulate, at least for a day, the lifestyle they made viable through their generosity and reverence.

Note that some suttas hint the upoasatha was not an invention of the Buddhist community but innovated by it.

In EBTs, the Buddha praises the observance of the uposatha by contemplative and lay disciples. For bhikkhus and bhikkhunis, the uposatha is when the recitation of the monastic conduct code (pātimokkha) takes place, and AN8.20 offers a curious origin story for this. For the non-contemplatives, i.e. householders or lay disciples, the Buddha of EBTs encourages an eightfold observance of the Uposatha which is all about emulating the behaviours of those deemed to be arahants. The eight factors as p…

Thanks for this guys. Will check out the above sources

This isn’t really the early days but it might be of interest.

The Ornament of Lay Followers

Written in the 12th Century by Sinhalese monk Ananda, this book is considered the most detailed treatise for lay followers handed down by the Theravada tradition. It is now, for the first time, translated into English.

I personally haven’t looked at it.

try these EBTs:
AN8.26 Jivaka sutta -who is a lay follower
AN4.62 Anana sutta - pleasures a lay follower can (should?) have
AN4.55 Samajivina sutta - living peacefully with one’s partner
AN8.54 Vyaggapajja sutta - money, friends, spiritual development (ie stream entry) for lay followers
DN31 Singalovada sutta - obligations towards each other, career, friends, etc
AN8.43 Visakhauposata sutta- going on retreats, or 'uposatha days’
AN5.36 Kaladana sutta - Giving, responsibly, responsively as a lay practice.
other suttas showing lay people can attain jhana, and high noble (ariya) attainments, lay people practicing the four foundations of mindfulness, etc.

Thanks! Quite a lot to digest, which I look forward to doing…

Expanding on Kelly (2011)—thanks @Gabriel!—I summarized his Table 13 in a word cloud, taking the liberty to borrow Bhante’s terminology.

Here we can see the relative frequency of Dhamma topics addressed to lay people in the four nikāyas and four early books of the Khuddaka Nikāya. The size of each word corresponds with this frequency. 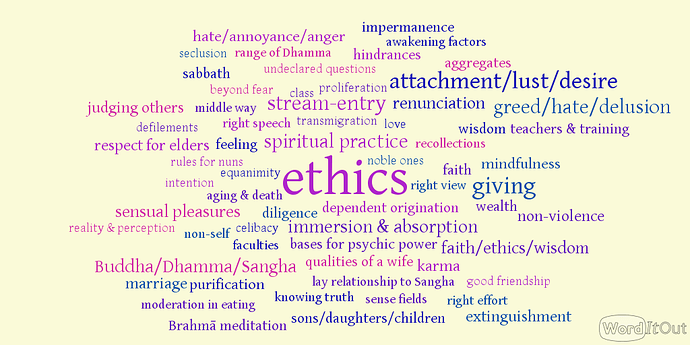