In his translation of SN 3.11, Sujato translates Lohaḍḍhamāsova suvaṇṇachanno as “like a copper penny coated with gold”.

There is some analysis accompanying the page, which I could follow but didn’t find wholly convincing. Looking at the Chinese, I wondered if this has influenced the translation of the Pāli? I.e.

猶如鍮石銅， 塗以真金色，
“Like brass being used to paint the color of true gold.”
(trans by Dr Jeffrey Kotyk)

loha (red/yellow) is used to refer to copper and copper-based alloys like bronze and brass. But brass requires zinc in the mix, and it’s not clear whether Indians made brass in that time period (the Iron Age).

Buddhaghosa glosses Lohaḍḍhamāsova as lohaḍḍhamāsako (SNA I 150), Where aḍḍha-māsako means, according to PED, “half a bean” (as a measure of weight). Also a small coin when coins were used. I’m not sure this helps since dating the introduction of coinage in Indian is tricky. The coins that Sujato references were, I gather, typically punch-marked silver. A weight measure or even “nugget” seems more likely for a sutta set “in the Buddha’s day”. (I need to read more on this and have a library trip planned for today to get the latest Joe Cribb article on this topic). Even now, gold paint or gold leaf are easily distinguishable from metallic gold.

Also aḍḍhamāso is “a fortnight, a half-month”. (e.g. icchāmahaṃ, bhikkhave, aḍḍhamāsaṃ paṭisalliyituṃ “Monks, I wish to go on retreat for a fortnight”).

I’m not sure when the technology existed to coat anything with gold and this is something I will look into. It’s not a simple process, they didn’t have electroplating, eh? Is there evidence of paint in use at this time? Or are there gold-coated artefacts in the archaeological record that I’ve overlooked?

But I’m not convinced that suvaṇṇachanno means that anyway. I can see how, if one saw the 5th century Chinese translation, that one might come to this conclusion. But it doesn’t ring true to me as Pāḷi (FWIW). For example, it could just as easily (I think) be read as a locative tatpuruṣa: suvaṇṇe channo , i.e. “concealed amidst gold”.

Sujato’s translation is certainly possible, especially given the topic of the sutta. I’m not saying he’s wrong. I’m asking for clarification. I wonder if Sujato would mind spelling out the rationale for translating this unique and tricky expression as he did?

I’m not sure when the technology existed to coat anything with gold and this is something I will look into. It’s not a simple process, they didn’t have electroplating, eh? Is there evidence of paint in use at this time? Or are there gold-coated artefacts in the archaeological record that I’ve overlooked?

There are archeologists who’ve suspected that electroplating may have been the method used to gild artifacts from ancient Egypt. Apparently, ancient batteries have been discovered, making it a possibility. There were also chemical processes using acids and mercury that have been used to gild other metals for a very long time. It’s not a modern invention. I believe chromed swords were discovered in tombs in ancient China, during the time of Qin Shihuangdi. It’d definitely be interesting to know if there’s a firm archeological record of these metallurgical techniques in ancient India. It would help us date these sutras, or at least the earliest these redactions could be.

BTW, the parallel in T100 is even clearer in its verse than T99:

It’s like coated earrings
And also coated coins:
A fool takes them to be gold;
They’re actually copper inside.

About the only thing I am formally educated in is chemistry. Chemical deposition of gold is very difficult because gold is very reluctant to form the usual metallic salts that allow it to be dissolved in solution. It can be physically dissolved in mercury, with some help.

As you say, there are wild theories about technology in the ancient world and these are difficult to disentangle from objective facts. We may never know. However, I’m talking to Joe Cribb, an expert on Indian coinage, and we may be able to pick out some absolute dates based on when types of coins first appear in the archaeological records.

The fact that this reference is a hapax legomenon makes me think that if such processes were possible, they were exceedingly rare. My sense is that we have translated without sufficient attention to levels of technology.

That Chinese translation is from the 5th century, or so, right? So, roughly 800-1000 years after the putative time of the suttas. And we know that where the Chinese encountered a hapax they often just replaced it with something they did understand. For example, I wrote about this with respect to the terminology of archery:

That Chinese translation is from the 5th century, or so, right? So, roughly 800-1000 years after the putative time of the suttas. And we know that where the Chinese encountered a hapax they often just replaced it with something they did understand.

Well, the situation with the Chinese translations is complex because the texts went through a couple intermediaries before arriving there. The original texts came from a Greek influenced region of India and then went through Silk Road cities before finally being translated to Chinese (often by Central Asians). So, they may well have been already translated twice before they were rendered into the Chinese versions we have today.

There are times when Chinese equivalents are used for trees, animals, and mythological creatures, and that’s clearly Chinese interpretation. It happened, but we have to pay attention to the intermediaries, too. Coins were in wide use in Bactria and Gandhara because of trade with western civilizations, but how far back do gold coins go? People would want to counterfeit gold coins when they were in use. That would be the first question I would ask about the SA and SA2 redactions.

In China, gold was not used for money, not even in much later times. They finally adopted silver for money during the Ming (~15th c.) after encountering Spaniards paying for goods with South American silver. This was after using copper coins and paper money for a long time. They would’ve been familiar with copper coins in the 5th c., but it isn’t likely people were making counterfeit gold coins in China. It would make more sense that it’s a concept from the Silk Road region or India. The Buddhists there were in contact with the Greek world and Persia from ancient times, so that extends the possible origins of the concept further away than India, and it may have made its way to south India, too. Just my thoughts on that.

Of course, none of this has that much to do with the Pali passage. I’ll leave it to the Pali experts to work out what exactly it means.

For example, I wrote about this with respect to the terminology of archery:

Thanks for sharing this. I notice that you were unaware of the intermediary language that the Chinese transliterations represented at the time, which made interpreting Chinese terms quite difficult because they differ so much from Sanskrit. There’s still the trouble of not having a complete Gandhari lexicon to use, but it’s not as mysterious as it used to be.

To help with one of the terms from T 94 in your footnotes that was problematic, 翅羅鴦掘梨 is roughly EMC shi-la-ang-gut-li. The first four syllables are likely G. śiraṇg(a) = S. śṛṇga, which means “horn.” So, the word is very likely related to one of the S. words for bows you discussed in the article. Perhaps a name given to a tree used to make such a bow? Unfortunately, there aren’t any parallels in G. that I can find offhand, but the word looks to be G *śiraṇguli(-ka/-ya) to me.

I would suggest using a Gandhari reference like gandhari.org when trying to work out early C. transliterations, and also observe the general patterns attested in extant Gandhari texts described by Brough and other scholars who’ve studied them. It helps a great deal. Sometimes. It gets me halfway, at least. Brough’s The Gandhari Dharmapada has a nice summary in the introduction.

I really just wanted to hear from Sujato about his translation of the Pāḷi. He doesn’t seem to be around unfortunately.

Hi Jayarava, Bhante @Sujato will be back from retreat next week.

Also aḍḍhamāso is “a fortnight, a half-month”

It is, but it’s a different word. Māsa is either “month” or “bean → coin”, here it is obviously the latter. Aḍḍha is a general prefix, it can be added to “half” anything. Normally the coin would be māsaka, but it’s common for the taddita suffix to be dropped, here metri causa. It’s not significant.

I’m not sure when the technology existed to coat anything with gold and this is something I will look into.

Let us know what you find.

The coins that Sujato references were, I gather, typically punch-marked silver.

As far as I know, there were many different materials used. Certainly that is the case for the Vinaya (although the Vinaya Vibhanga is of course later than the suttas).

it could just as easily (I think) be read as a locative tatpuruṣa: suvaṇṇe channo , i.e. “concealed amidst gold”.

Sure, that’s possible. Perhaps a translation “like a copper penny covered with gold” would preserve the ambiguity. Anyway it should be halfpenny.

I would have guessed that it was pressed gold, like gold leaf? This is pretty common in Buddhism today. Do you think this would have existed at the time? I can’t recall any references in early literature.

The metallurgy and gold and silver works of the ancient Medes and Persians is world renowned. The Persians were in the gandhara by around 500 BCE, plus there are records of Indian archers in the Persian army. And they were there in some favoured capacity. 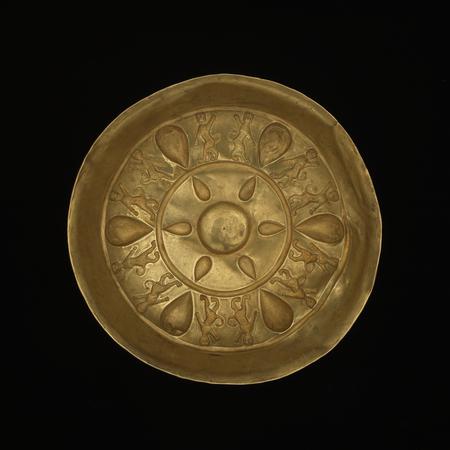 Hammered gold bowl with low umbo; shallow form; umbo (omphalos) hammered from the outside; embossed from the inside with decoration in two concentric zones, the outer one of which consists of pairs of lions erect upon their hind legs with their...

The metallurgy and gold and silver works of the ancient Medes and Persians is world renowned.

Sure, but “good at goldwork” doesn’t mean “has mastered gold-plating”, which is the issue here.

This is 2nd c BCE

Which is 2+ centuries after the time of the Buddha. The question is whether such technologies obtained in a canonical text. If they do, then either they existed earlier than the physical evidence shows, or the text in question is late. It is not “foolish” to ask for evidence before concluding either way.

The Medes were 8th, 7th c. BCE. Some of the work is astounding. It continued into the Persians, and on. Other than that feel free to look into the archaeological record of ancient India.

I just came across a data point that seems relevant. Check out RV 5.62.7:

Rig Veda 5.62.7: “The substance (of their chariot) is of gold; its pillars are of metal, and it shines in the firmament like lightning; may we load th...

It has the word, hiraṇyanirṇig, which in the old Wilson translation liked there is “the substance (of their chariot) is gold”. In the 2014 translation by Brereton and Jamison it is “metal cloaked in gold”. Hiraṇya is gold, nirṇig is “dressed, wrapped”.

Hard to say exactly from such a poetic text, but it could be a reference to gold plating long before the Buddha.