Looking for a kids' book about Mahapajapati Gotami

When I was a kid, the school library had a book about Mahapajapati Gotami which had line art in a similar style to the picture:

The cover was light blue, it was probably meant for ages 9-15. I don’t remember the title and I haven’t been able to track it down since.

Does anyone know anything about this book? Any info would be appreciated.

(Also: if you are surprised that my school had this book, that is understandable, as I was also surprised.) 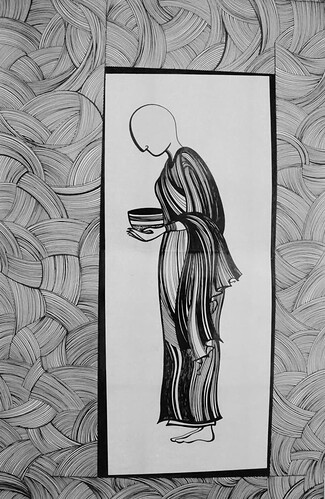 According to her blog, Hashini Chandrasiri had been a drawing student of Mr. Lionel Ranaweera and Dr. Chandraguptha Thenuwara, the style is so similar I wonder if there is a connection? No idea.

When I was a kid, the school library

in a similar style to the picture:

I know right? This was the same library that refused to stock Harry Potter.

There was also a decent Australian YA fiction book about a gay Buddhist kid that I’ve since lost the title for as well.

I would just email the school to ask for titles directly but I’m worried that the librarian is going to panic and think that I’m on a reconnaisance mission for the pastor.

I would just email the school to ask for titles directly

I’m guessing you have checked to see if the school has an online catalog?

I would imagine that if you called the librarian and at least explained that you were a student there and you remember a book, they would not be too freaked out. I think librarians are by nature helpful.

There was also a decent Australian YA fiction book about a gay Buddhist kid that I’ve since lost the title for as well.

YES IT WAS TUMBLE TURN

Just swimming and thinking about Buddha.

Something I can relate to.

“I became a Buddhist because my Year Seven teacher is one. She is mystical and I am very much in love with her. She wears lime-green nail polish and nearly all her clothes are purple. She has magnificent chalk.”

Ok confirmation from the library: mahapajapati book is no longer in their collection.

I’m starting to think it must have been a limited print run. But someone, somewhere, might know.

I’m starting to think it must have been

Guanyin planting a wholesome little seed right where it was needed