Looking for original sources of stories in Ṡatapañcāśatka in Pali Canon

I’m translating [The Satapancasatka of Matrceta] by D. R. Shackleton Bailey，and there remains some untraced stories which I’d hope to further look for their original sources in the Pali Canon.

Would you pls help me with the following if you’ve head of any one of them when you were browsing through the sea of the Pali Canon, or other Buddhist literature?

Thank you very much! 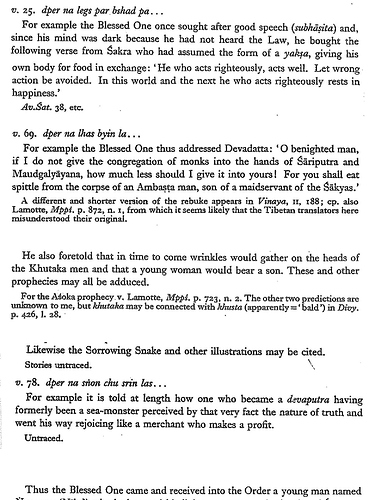 For the first passage, the Sanskrit is at Avs 38.

The background narrative is a Jataka story, which explains why the “blessed one” is seeking after good speech: in fact it is the Bodhisattva, then born as the son of King Brahmadatta in Benares. interestingly enough, his desire is said to be a dohada, which is normally the pregnancy cravings. The idea of transforming his body is not clear to me, I would have to check the sanskrit more closely. But it seems as if there is a confusion stemming from the shift in the meaning of the word yaksa. In the early texts, it simply meant “spirit”, and is neutral, applying to both good and bad beings; Sakka himself is identified as a yaksa. Only later did it come to specifically mean malevolent ogre. So I suspect there has been a later explaining away of this detail.

The Dhamma verse here has a number of parallels; the Pali is at Dhp 169. A related verse is in Ja 384. The parallels for all these texts list various other contexts. It’d be worth checking the commentary for both the Jataka and the Dhammapada. However I do not believe the prose story has a direct parallel in the Pali canon.

For the second one featuring Devadatta, the Pali source is in the source you supply. It is the Sanghabhedakkhandhaka, and you can find the passage translated at Kd 17. Each Vinaya has its own version of these events.

The third one is hard to trace without more context, but from what I can glean it refers to a prophecy of Ashoka. Ashoka is nowhere mentioned in any EBT, so if there is a Pali parallel (which I would hazard is unlikely) it would be in some later text.

I cannot identify the story of the deva who had formerly been a sea monster. It says “untraced”, and it may be a lost tale.

The story of the sweeper seems, according to the Dictionary of Pali Proper Names, to be found in the commentary to the Samyutta Nikaya, the Sāratthappakāsinī, vol 2, p 217 of the PTS edition. However I don’t have that edition, and I cannot locate the passage.

thanks very much for your info, you’re so knowledgeable and learned.

for the subhāṣita seeking story, I also found it in Chinese version of Avadānaśataka 34/35 撰集百缘经, not 38. and the Dhamma verse is really diffenrent, but the same in the sources you provided. I’m wondering why call his desire " dohada"? (kuśalo dharmacchandaḥ 善法欲 dge ba’i chos la 'dun pa)

And I could not read Pali this time, and is there English version of Avadānaśataka ed. J. S. Speyer. and
K.Sri.Dhammananda’s Dhammapada Stories available on the Internet? which may provide some commentaries to this story.

for Devadatta and spittle, I found this story (also in Mahāprajnāpāramitāśāstra) :

> There Ajātasattu fondled him, crooned to him and kissed him, and it so happened that some of his spittle drooled into Devadatta’s mouth. Because Devadatta desired gain and profit, he swallowed the spittle.

Yes, it is very curious. Most dictionaries will tell you that dohala or dohada (there are various spellings) is a word for a woman’s pregnancy cravings. It forms the basis for a uniquely Indian class of stories, where the woman’s “wish” sends the man out on a seemingly impossible journey. I have discussed these stories at some length in my White Bones Red Rot Black Snakes, and in my recent series on Buddhist Mythology for the Buddhist Library. This motif has, I believe, been neglected in scholarship, but is in fact one of the keys to understanding all myth.

In the Buddhist tales, the dohala need not be specifically a pregnancy craving. In fact it is rarely linked directly with pregnancy. Nevertheless, it is at the least associated with pregnancy craving, and in all the stories I know, it is always from a woman. So this case is really unique. You’d have to study the text closely to see what is going on: it could be a conscious reframing of the motif; or it could be no more than an accident of textual transmission.

Yes, it all seems more than a little confused. The Pali is chavassa kheḷāsakassā lit. “a miserable spit-eater”. But chava can also mean “corpse”. So that would explain how the corpse came in!

Ambasta is Pali Ambaṭṭha, the story of whose parentage you can read in DN 3.

and in this story, perhaps is the same problem:

Thus the daughter of a forest-dweller of Kausambi, wishing to bring Hastakāṭavika, her beloved,1 to the city of Śyāmā, was handed over by her father and his relatives to Hastaka in the wilderness, she and her companions.

– Śyāmā maybe a city near Kausambi or Alavi ( in Hatthaka’s story), but i failed to locate it.

So, is there a compatible dict which include all the different variations? that will help a lot!

Not really, these are just Sanskritic forms. It’s kheḷāsaka, the ssa ending is just the grammatical declension. ika/aka, ṣṭ/ṭṭh are common transformations.

Śyāmā maybe a city near Kausambi or Alav

Hmm, I’m not sure. There doesn’t seem to be a sāmā town in the Pali sources.

is there a compatible dict which include all the different variations?

Not really. If you want to research across the different languages, you’ll have to learn something about Pali and sanskrit and the relation between them. There’s a good summary on Wikipedia: Some dictionaries that I use:

Thanks very much for the info! I’d learn more about Pali | Sanskrit transformations:pray:

I’m wondering is there some English rendings of Auadānaknlpatā、Divyavadana、Jatakastava? Thanks!

Divyavadana has been translated, not sure about the other ones. I think Divy is only in book form, there’s no digital translation so far as I know.

thks! it seems that only 2 parts of Divy. are published, not the full version.

https://www.accesstoinsight.org/lib/authors/dhammika/wheel360.html#fn-31
it points to Anguttara Nikaya, 1:34, for the hardships and simplicity of the Buddha’s life.

however, i couldn’t find the text about eating poor food, and sleeping on the ground
trampled by cattles… the text page says I’m offline and won’t display. (SuttaCentral )

Your link is trying to access a non-existent “Bodhi” translation

I assume you got there from (the unaffiliated) http://pts.ticao.de/ converter. Next time, just click on their “sujato” link, which should work.

thanks a lot! that works!:祈祷:祈祷:祈祷:

and could please help locate where’s the text in the canon? (I found no correspondent text through the PTS converter)


But where’s the hardships and simplicity of the Buddha’s life?
The text seems not matching with the Ven. S. Dhammika’s notes.
Thanks for any help!

I too cannot find the reference in question

I wonder if you’re thinking about the bodhisatta’s austerities mentioned in MN 12 (at MN I 77-82)?

I’m sorry, my friend, but I’m not very good at reading Chinese. Could you translate your reply to English?

If your reply is about whether the Buddha (or bodhisatta) experienced these things himself (in his last life), Venerable Anālayo makes the case that these austerities were from a previous life that the Buddha was recalling:

The description in this discourse appears to be rather concerned with past-life experiences of the Buddha-to-be. This can be appreciated on consulting the Hair-raising Birth Story, the Lomahaṃsa-jātaka (Jātaka tale 94), which reports a whole past life spent by the bodhisattva in asceticism. Closer inspection of the Mahāsīhanādasutta confirms that the range of practices described here are not easily accommodated within the period of a few years that the future Buddha spent in such pursuits in his present life. They would indeed fit better a whole life of asceticism at some time in the past.

thanks for your info!
Yes, the sutra you provided are indeed about the hardships our Buddha had gone through in his past lives.
Maybe the Ven. S. Dhammika holds a different Pali text version? the following cannot be found, too:

https://www.accesstoinsight.org/lib/authors/dhammika/wheel360.html#fn-32
Manastabdha was so proud that he would not even respect his parents — Samyutta Nikaya, I:177. Angulimala was a terrible murderer — Majjhima Nikaya, II: 98-103. All were skillfully transformed by the Buddha.