With so much time on peoples hands, it’s nice to find little gems of entertaining dhamma to watch on TV

I loved this series as a teenager, and have just started re-watching it… Something for everyone, from little kids to seasoned practitioners 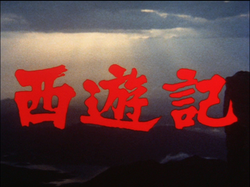 Saiyūki (西遊記, lit. "Account of the Journey to the West"), also known by its English title Monkey, also commonly referred to as Monkey Magic (the show's title song), is a Japanese television drama based on the 16th century Chinese novel, Journey to the West, by Wu Cheng'en. Filmed in Northwest China and Inner Mongolia, the show was produced by Nippon TV and International Television Films in association with NHK (Japan Broadcasting Corporation), and broadcast from 1978 to 1980 on Nippon TV. Two ...

You can find it all over the web, and it is also on DVD. I gave the whole series to my nieces as a christmas present some years back. They are Millenials, and both love it to bits

Note: There is a new re-make now, but the original is so very much better, and really very rich from a dhamma perspective.

I used to love watching Monkey!

I read a few years ago that this was being remade looking all modern and stuffs.

When I was an anagarikā a few time while walking back from the train I had people yell out their cars various expressions of excitement to do with monkey magic at me. It always gave me a giggle