Most ignorant Jhanas question ever

I’ve started coming across Jhanas in multiple texts. Are these considered common, rare or somewhere in-between? Site guidelines are to not claim any attainments; I’m asking only in general. Are we thinking Jhanas are…

I ask because they sound rather pleasant. If this qualifies as craving, I’ll deal with it next round.

Alternate question: would you expect a lay person to ever experience any of the Jhanas?

Loved this book and it helped advance my practice Mindfulness, Bliss, and Beyond: A Meditator's Handbook by Ajahn Brahm

I think the general consensus (though there are some who disagree) is that it takes some aptitude and a few years of effort: not easy but not impossible either… Perhaps comparable to running a three hour marathon? Or maybe an eight-minute mile?

Anyway, that should be correct within a factor of 10… just to give a rough estimate.

Rather in between two and three. There are a lot of people who think they have jhanas and don’t. But as a monk friend of mine once said, “Hey, if you can even fool yourself that you’ve got jhanas, you’re doing better than me!”

I don’t think there’s any hard data on it, but my impression is that a reasonable percentage of people in spiritual circles have probably had some jhana experience, even if only one “accidental” jhana, like the Bodhisata as a child. Say, less than 5%?

Of these, only a small percentage are able to practice jhanas regularly, and then usually in a retreat or similar. Very few people have stable enough samadhi to just get jhanas whenever they want.

It seems to have more to do with natural aptitude than whether you’re monastic or lay. You shouldn’t ordain to get jhanas, but to support your spiritual development generally.

It’s okay, in fact essential, to want to experience such subtle and blissful states. Just don’t get hung up on it. You get jhanas not by wanting them, but by laying the groundwork of morality, contentment, and generosity, and developing a regular meditation practice. Jhanas will come to you when you’re ready.

Thank you all; that’s clear.

I’m currently downloading this to my Kindle…looking forward to reading it :]

But as a monk friend of mine once said, “Hey, if you can even fool yourself that you’ve got jhanas, you’re doing better than me!”

As a personal metric, if my wife mentions I was snoring on the meditation cushion it was not in fact jhana.

@Radius, not a “most ignorant jhana questions ever,” but a good question, and one that always bears repeating as it seems to me that the jhanas (samma samadhi) were one of the most important practices that the Buddha emphasized, and one that is largely forgotten by “the Buddhisms” today.

My guess is that the jhanas are altered states of consciousness similar (but certainly not the same as) to what some athletes have described as “flow states.” These athletes have years of training and experience with their sport, and on rare occasions, are able to let go of goals, to let go of what is going on around them to let go of expectations, and they enter a state where they cannot miss a shot, or of some golfers that made all of their putts, they felt completely integrated with the green, the cup, the grass such that they could almost magically read and feel every putt as it went into the hole. “Some hallmarks of the flow state include: losing track of time and external concerns or stimuli, feeling connected to something greater than oneself, and feeling challenged but not overwhelmed in terms of the ability and attention needed to complete a task.”

As Bhante pointed out, the steps toward the jhanas are living and practicing wholesome states, which can include the first seven steps of the Noble Eightfold Path. Ajahn Brahmali has rightly pointed out in some of his talks that it can be difficult to practice toward jhanas if your life is unskillful or chaotic. Once established in a good life, and a mindful state, it seems to me that with practice, one can start to truly let go, such that the mind slips into states of absorption, altered states of consciousness. This can be like the “flow states” described above, that comes to athletes after some years of practice and mastery of their sport, and the ability to let go of attachments to allow the mind to enter a “zone” whereby this altered state can flourish. It is within these altered states that we have the opportunity, then, to cultivate the vipassana (insight, or clear seeing) part of the meditative practices.

NBA legend Larry Bird said that when he was in the “flow” , his perception of time would slow down for him.

The ‘chaotic’ element caught my attention, and also (in particular) the ‘contentment’ word of…

laying the groundwork of morality, contentment, and generosity, and developing a regular meditation practice.

In my head ‘contentment’ and ‘gratitude’ are at least cousins; I’ve been deliberately practicing gratitude practice this year and found it very liberating. Long story short, my Buddhist baby steps for the last year focused on correct effort and it got interesting once I started paying attention to the 2 x proactive / preventative ones; again a thumbs up for this concept of nutriments, groundwork and cultivation instead of waiting for a crisis.

For what it’s worth, yesterday I searched SC for ‘Contentment’ and found AN6.114. Honestly, I assumed it was some kind of monk inhouse joke passed down for 2500 years and went to bed. This morning though eating brekky I put a brutally summarized version on my whiteboard… 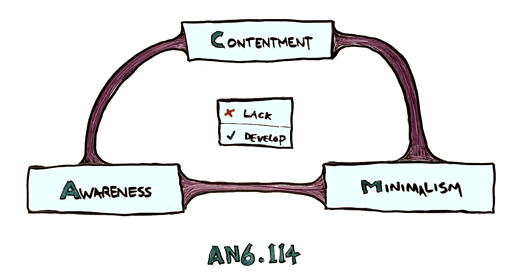 I thought about it during the day but couldn’t figure out why they’d bother saying essentially “The solution to not being content is to be content” - there had to be something more to it. And why are they ‘the triads’ and not ‘the one-ads’? i.e. there are relationships implied here. Then I started thinking that with some poetic interpretation, development of any one mind state could perhaps be said to favor prevention of a lack (of the other two). I revised my attempted summary… 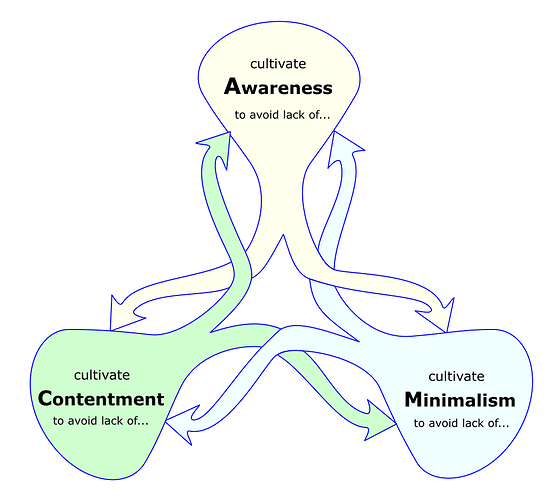 “Done” I said and began dinner. No, not done. Firstly, the diagram no longer accurately represents what the sutta actually says!! Second, if I want to live ‘minimalism’ (inc. thoughts) then this diagram is too complicated.

After dinner, I realized I was fundamentally approaching this the wrong way. Cultivate contentment, situational awareness and having few wants, that’s the take-home message shown here in ANarchy-friendly format: 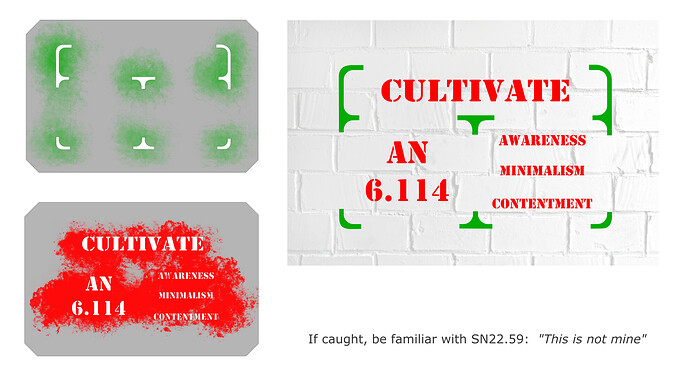 It seems to have more to do with natural aptitude than whether you’re monastic or lay.

Note to self and any other noobs, I ‘met’ Citta the householder just now. Despite being a lay follower, he claims Jhana states, so at least in theory it’s possible. (In fairness, he had no internet to distract him, nor (I assume) did he reside in a condo with a literal clown living on the floor above him).

…has a part saying effectively “flash is trash without the basics, just breathe with no commentary”. I paused reading at that point and have been trying since to have commentary-less meditation but it proves highly elusive; i.e. I don’t expect to attain Jhana states in the near future.