This is interesting. But do really over half of the hip-hop and rap-musicians get murdered? Well, at least they don’t have to suffer from cancer or heart-related diseases!

And it looks like Metal & Punk are indeed the most destructive and depressive! 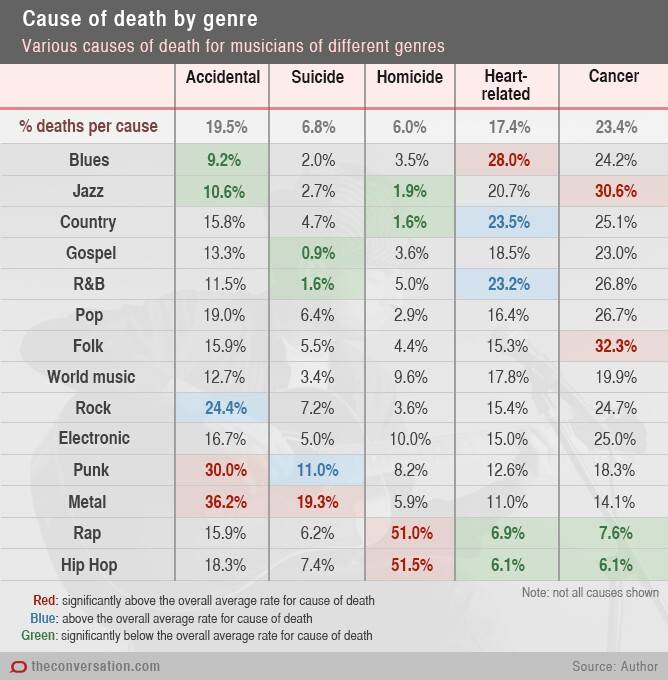 Blues, Country and R&B have higher than usual % of heart problems.
I could’ve told them that

I do know that if I am in a shop somewhere, and a Nickelback song is playing over the sound system, my blood pressure spikes to higher levels. I feel a bit of nausea. I can’t prove it, but listening to Nickelback may cause health problems.

That study, and accompanying chart, strike me as a little dubious, since the author is vague about the methods used. In the first article in the series, the author says:

How did the author sample the category of performing pop musicians who died between 1950 and 2014? Only 12,665 people fall into that category? A quick Wikipedia check of the membership of the American Federation of Musicians of the United States and Canada shows that their membership in 2016 was 75,542. Using that as a rough count of musicians, and assuming an approximate 1% death rate, one would expect about four times that number for a 64 year period. And that’s just the US and Canada.

That is a large number of sources. But several of them specialize in noting scandalous deaths, and so if they miss people, they will miss people whose deaths were boring. Do those sources taken together really count all popular musicians who died in that period? Or only famous headliners, noteworthy enough to earn a listing, and who might be expected to live a more intense, high pressure lifestyle than a low-key career session musician who simply died in bed?

Also, as the author notes at the very end of the article, rap and hip hop have not been around very long. So, the class of rap and hip-hop artists who have already died prior to 2014 is by no means a representative sample of all hip-hop artists. Instead, that sample consists of people have something in common: they died relatively young. Thus, what that middle column shows is that about half of hip hop artists who died young, and were well enough known to appear in the sources she used, died by homicide.