I uploaded new Burmese translation of the Khuddakapāṭha, Udāna and Itivuttaka with thanks to the translator Nathan Wynn. We had some issues with the conversion of the Burmese font and in the end converted it from Zawgyi to Myanmar3 UTF-8 font:
http://www.myanmarlanguage.org/unicode/zawgyi-unicode-conversions-tips-tricks-and-risks

If anybody could check and see if it is now readable, I would be very grateful!

same for the other two texts 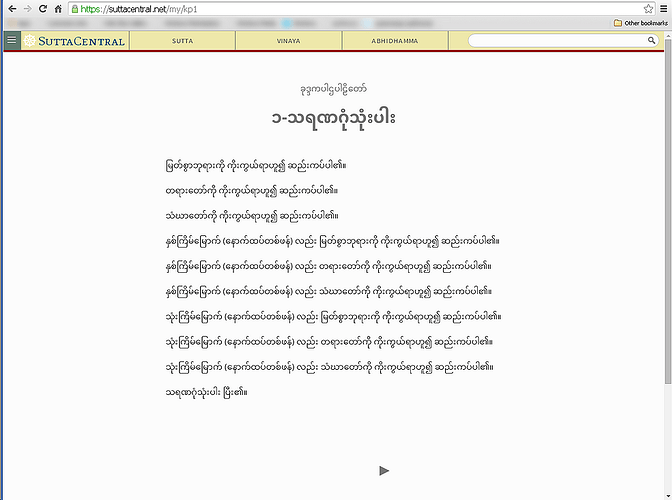 Sorry … but I don’t quite see what you are saying. Is there a problem with the texts?

i guess i’m responding to your request

If anybody could check and see if it is now readable, I would be very grateful!

can you see text on the screenshot?

I figured you were responding to that - but no, I cannot see any text on the screenshot - only the website page itself.

do you mean you don’t see text in Burmese alphabet on the screenshot i attached earlier?

I think we are talking cross purposes here. I thought you had made some notes on top of the screenshot to tell me where some errors were. I cannot read Burmese so I cannot tell if the text is something that makes sense or not. Therefore, it would be helpful if somebody who understands Burmese can read it and see if it is indeed correct.
I basically see the same thing as on your screenshot.

i see, that wasn’t clear initially

Just to note, Nay is not the translator; he has just been helping us with the text. The translation is, I believe, an “official” translation by a Burmese group, although I am not sure of the details.