Non-evil platforms for Buddhist monks/nuns to post on, escaping GAFAM/FAANG/whatever

then Signal is awesome.

Hmm.
Brian Acton co-founded the Signal Foundation in 2018.
Just as he had co-founded WhatsApp for Meta in 2009.
Oh, and he’s but the 836th-richest person in the world.
Those platforms are all made by the same billionaires.
I find it quite hard to trust any of them.

What about the social platform Thinkspot?
Do you consider it to be promising?

I have a slight doubt about the security of Signal. Why? Because they are storing a user’s messages in so-called “secure enclaves” in Signal servers, but those “Secure enclaves” are a new-fangled hardware feature, which might not be all that secure at the end of the day (kind of like how DDR4 RAM is today). This functionality makes it possible to migrate messages from an old phone to a new phone. Signal had to unfortunately do something, to keep up with how WhatsApp can do it (the end users were whining about the need to migrate messages to new phones).

Since Bruce Schneier, and very credible security experts like him endorse Signal, I defer to their expertise.

Anyway, I’ve devoted way too much time to investigating alternatives in this domain. No matter what newcomers show up at this point, there unfortunately needs to be at least a good 10 million users of any such platform (a milestone of decent usability and stability gets achieved at about that point) for it to have any hope of continuing on to building up a critical mass.

Signal is currently the best shot, IMHO. Having said this, in about a decade or so, something even better, and worth using instead will likely come along. It’s way too early for me to want to “switch horses” at this point, just when Signal is hitting its stride, as it were.

Let’s think about what is the real root.

People are choosing these elected officials and are voluntarily using the tech services.

They are voting without doing their homework, are over & over choosing instant gratification and come to regret the consequences of their choices.

They have a happy go lucky attitude in regards to so many important issues and ree when it backfires, like children.

I think people are often very irresponsible and it is wise not to get overly involved in solving other people’s problems.

Of course the bad choices of our neighbours are causing us suffering but this we just have to accept and endure as it is the result of our own bad kamma because we too did stupid things.

There is this saying

The only thing necessary for the triumph of evil is for good men to do nothing.

I don’t take this as a call to work against corrupt people but rather as a call to do my own work of purifying the mind, help others where convenient without sacrificing my own welfare and try making good choices.

Evil may triumph but i’ll try to make sure it doesn’t triumph in my mind.

Today I did a Dhamma Talk with all sorts of tips and tricks for avoiding the tentacles of Social media, in the interests of seclusion, sense restraint, etc:

(My “Poor Man’s Netflix” solution above gets mentioned, plus I offered advice on avoiding the ads shown in front of, and just below the Dhamma Talks by Buddhist monastics in the Youtube app)

It’s mind-boggling to even try to imagine how large and powerful Meta is: 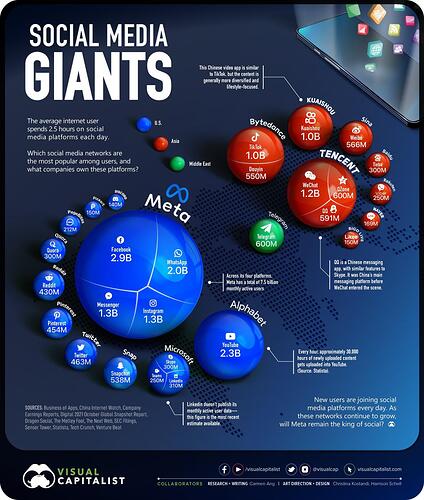 If this strikes you as some sort of problem, and wish you could do something different, I suggest considering Nextcloud. I mention this because Nextcloud 23 recently came out:

The new “Nextcloud Office” feature looks interesting, which is an integration of LibreOffice/Collabora Office into Nextcloud (which makes it a competitor of sorts, to Microsoft Office 365, or Google Docs).

I’ve been using Nextcloud (on a near-daily basis, during the appropriate times when Internet is available) since version 13 - which is 10 versions ago now. I contributed a method to do conservative, cautious upgrades of Nextcloud, using snapd (and a method of how to back up Nextcloud first)

PS: I’ve signed up for a posteo.net email address. This email provider comes recommended by the geeks I know. It costs one euro a month, which I say is worth it.

Yeah, a bit weird they didn’t include Gmail in that infographic. Also: I didn’t realize QQ was still around! and not small either!

A highly insightful (albeit technical) article on the hard-to-believe Dukkha of trying to run your own email domain (as opposed to using a privacy-violating, free account from the likes of Gmail):

A frustrating element of email deliverability is the inconsistency in the way that email providers handle it. It used to be that it was often possible to get feedback from email providers on your deliverability, but that information was of course extremely useful to spammers, so major providers have mostly stopped giving it out. Instead, email providers typically reject some portion of mail they don’t like entirely, giving an SMTP error that almost universally gives a link to a support page or knowledgebase article that is not helpful. While these SMTP rejections are frustrating, the good news is that you actually know that delivery failed… although in some cases it will succeed on retry. The mail servers I run have been around long enough that outright SMTP rejections are unusual, but I still consistently get a seemingly random sample of emails hard rejected by Apple Mail.

What’s a little more concerning is, of course, a provider’s decision of whether or not to put a message into the junk folder. In a way this is worse than an outright rejection, because the recipient will probably never see the message but you don’t know that. Unfortunately there aren’t a lot of ways to get metrics on this.

If you self-host email, you will run into an elevated number of delivery problems. That is a guarantee. Fully implementing trust and authentication measures will help, but it will not eliminate the problem because providers weight their IP reputation information more than your ability to configure DKIM correctly. Whether or not it becomes a noticeable problem for you depends on a few factors, and it’s hard to say in advance without just trying it.

Federated systems like email tend to rely on a high degree of informal social infrastructure. Unfortunately, as email has become centralized into a small number of major providers, that infrastructure has mostly decayed. It was not that long ago that you could often resolve a deliverability problem with a politely worded note to postmaster @ the problematic destination server. Today, many email providers have some kind of method of contacting them, but I have never once received a response or even evidence of action due to one of these messages… both for complaints of abuse on their end and deliverability problems

Yes, it’s just like that! I can verify this first hand. My email servers get perfect scores, when I test them using online services like mail-tester.com, and “MX Toolbox”. Despite this, Gmail still treats my messages like Spam.

A good way to sabotage effective communication is to make up your own abbreviations or user obscure ones:

I didn’t make those up.

Reddit is also taken over by Satanists. They banned me many times for no particular reason. They want to deceive people. I’m so glad I joined this forum. At first I thought it was hijacked too since I need approval. But turns out you guys are awesome lol. Hope this site is not also taken over anytime soon

In general, most people are not gullible to fall for conspiracy theories. And conspiracy believers tends to shut conversations out because it’s not possible to communicate effectively when the views are so divergent. And we don’t want to listen to any arguments, “proofs” etc which the conspiracy believers have. It’s just wasting our time.

I am not surprised that many subs in Reddit would ban you for your views then. Here, people just tend to flag your comments (which contains unreasonable conspiracies) rather than reply and risk any arguments from you.

Just don’t expect to have anyone believing in the conspiracies you believe in. And try not to convince others, it might get flagged too.

In terms of the dhamma, conspiracies are like delusions. It’s already hard enough to remove the fundamental delusion of permanence, happiness and self, without having to add on any conspiracies on top of it. And they don’t lead to liberation. So it’s a waste of time for Buddhists to be involved in conspiracies.