On creating a map of Early Buddhism

Thanks @Vimala for the map, it’s awesome! I’ve wanted to do this for such a long time.

It seems that Google Maps offers a simple and useful UI for creating such a map. Maps are one of Googles core properties, and there’s no doubt they’ll keep this at the cutting edge of what’s possible for an online map service.

We can add the known places, as you have done, and also regions (such as the countries) and journeys are no problem.

As time goes on we can enrich the data with pictures and video.

Just playing around, I’ve added Magadha, a video for Nalanda, and an image for Hell.

In the long term, I do have a couple of concerns about using Google.

While obviously it would be a lot more work, perhaps in the long term we could look at developing our own app, based on the several excellent modern open source mapping libraries that have emerged in the last few years. We could use Google Maps as an interim solution.

In the meantime, though, why don’t we add what we can to the current app. The next trick will be to figure out how to integrate it with SC!

For those who want to see the trial map. It is here:
https://www.google.com/maps/d/edit?mid=z1fKgOqM_IYc.k-W6AbJIxLu8&usp=sharing

I have made a kml file from our own data and filtered out the items that had actual coordinates, which is less than half. The kml file for the full data-set:
https://github.com/suttacentral/suttacentral-data/blob/master/dicts/en/placenamesall.kml

And the kml file for the data-set that just contains the entries that have coordinates:
https://github.com/suttacentral/suttacentral-data/blob/master/dicts/en/placenames.kml

It is basically just a rough dump of the sc_dppn data we already had.
It might be good if somebody goes over all the placenames that we have no coordinates for at the moment and add those where possible.
It should be fairly easy to integrate with SC through the kml file.
I suggest to only make changes in the kml file on SC rather than on google itself.

Awesome, indeed! What utter fun! A little while ago I made a map for myself to get an idea of where the Majjhima played out. It was mostly guess work, so it’s brilliant to have something to cross-reference with. Much thanks!

It might be good if somebody goes over all the placenames that we have no coordinates for at the moment and add those where possible.

It would certainly be good to review these. But in the majority of cases the ones not listed will be unknown.

I suggest to only make changes in the kml file on SC rather than on google itself.

That’s fine as far as adding places goes. But what about things like defining regions and lines? Using a GUI is ideal for this, it would be a nightmare to write them in straight KML. Anyway, I am in HK and will have a bit of free time over the next couple of days, so I’ll play around with it and see what the possibilities are.

I can’t see what the data is or how to extract it.

Scratch that, you can export the data right from the app.

Things that I’d like to see done with the map:

@Aminah, would you interested to help out with this map?

@Aminah, would you interested to help out with this map?

I’d be most glad to, although I think I’d need a little pointing in the right direction.

With reference to some of the points above:

As an aside, my experience was that using layers was quite helpful so that particular elements can be turned on and off as needed (after a while things can get a bit cluttered).

Also, yes the .kml file Google offers can be successfully imported into, eg. the Openstreetmaps based facility UMaps, but much as it is great, my feeling is that Google’s search capability is simply far superior and, for instance, allows me to find where MN 107 was delivered instantly where UMaps doesn’t.

Anyway, just let me know what, where, when and so on and I’ll get on it.

That’s fine as far as adding places goes. But what about things like defining regions and lines? Using a GUI is ideal for this, it would be a nightmare to write them in straight KML. Anyway, I am in HK and will have a bit of free time over the next couple of days, so I’ll play around with it and see what the possibilities are.

You can make them in the GUI and then I can download it again as kml and replace our kml with that.

I will add @Aminah to the people who can access the map. Have fun!!!

PS. Any particular reason why the Niraya hell is situated in Turkmenistan???

Using Google Maps as a starting point is a good idea, but I agree that having it in-house would be the best for future safety and integration with SC.

I used the KML that @vimala exported and placed it in OpenLayers and this is what I got:

This is just a very quick test and there are many things that may be configured, OpenLayers is sometimes a bit hard to work with, but it is very potent. There should be other good/better options out there. I just want to express the possibility of eventually importing all the information in-house.

Count me in if there is anything I can do to help, this is a great idea!

PS. Any particular reason why the Niraya hell is situated in Turkmenistan???

at least in the human rights aspect

Earth is full of bizarre landscapes. Some are land formations moulded over thousands of years, while others are human-made creations that have altered the planet in strange ways.

The Door to Hell in Turkmenistan has been burning its flames since 1971. Somehow, the hole continues to burn since it was accidentally drilled into by geologists. 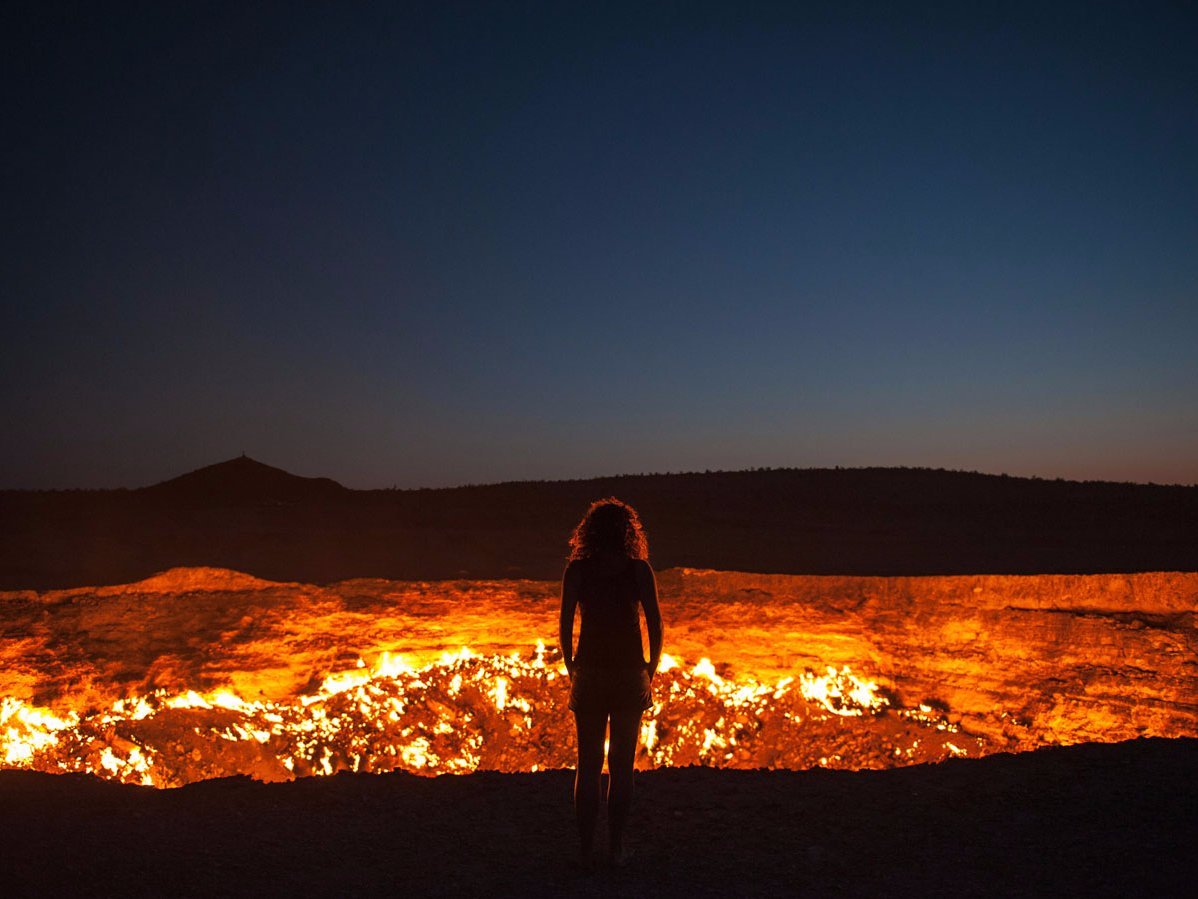 I can’t remember the exact documentary, but archaeologists usually are able to find places and landmarks described in the Suttas and other references, including those of Asoka, I think it was a serious documentary.

After a little bit of tinkering:

With regard to the unknown locations, I’ve added a layer with a few possible additions that can be confirmed or deleted as whoever pleases. I’m guessing Gonaddha and Vedisa (not on the original list) as identified in the Parayanavagga route must be reasonable approximations. Likewise, Nādika and Pataligama from the DN16 route seem like safe-ish bets.

Also, as MN 34 states that Ukkācela lies on the Ganges and is with in the Vijjian territory , there’s only so wrong the guess can be. Piya Tan identifies Devadaha on the Rohini river and elsewhere it is stated that it ‘brackets’ Lumbinī.

Finally, I have my doubts about Rāmagāmaka (did Koliya go that far south?) and Cātuma & Amalakīvana (given as the exact same location as Kapilavatthu).

Who is to say what more will come of more tinkering!

There’s a lot that is known, especially most of the major sites, but still many obscure villages and whatnot that are only mentioned in passing in the suttas. Sometimes we have a vague notion where they are (“in Magadha”, for example), but not the precise location.

Are there links to this, or is it just an offline app?

this would only be possible through Google Maps API

Yes, I think you’re right. We can leave it for now, concentrate on getting the main data in there.

regions have been added

Good, thanks, I’ll investigate. We know little about the exact boundaries. Vajji/Magadha is defined by the river. Kosala and Magadha were fighting over Kasi, so the boundaries were not fixed. Simply to indicate a general region is the best we can do.

Here is a map Brahmali and I made for our Authenticity book, it might be helpful: 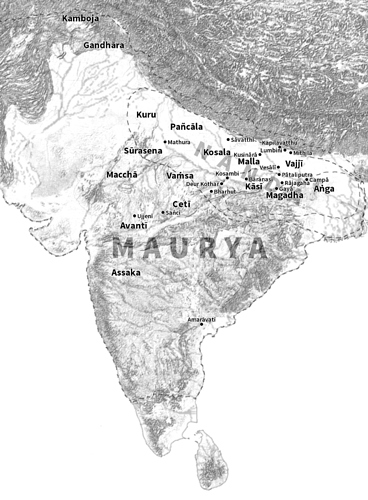 I’ve left the original markers in, but in effort to be both practical and ‘fun’ I’ve converted them into little fortress icons

I’m not sure what these are. Do you mean, they are the original coordinates for the janapadas? If so, best delete them. I’m applying the following:

As for media, there will be images on Wikipedia and similar for many of the sites. Video can be good, but just an image already helps a lot. I should clarify that I’m looking for actual images of the places, not historical reconstructions. (although there might be a place for that if they’re done well.) The point is to convey that this is a real place, not some mythical land. The video you put in for Magadha is great!

As for the questions as to location, maybe we should open up a new thread and we can list these questions there and sort out what we can.

I did just a quick test, I will work on it so that it is more ‘useful’, I can upload it in a git repository (I usually use Bitbucket) or send you the files if you think that is better.

Great. I’ve been adding stuff this morning, so best use the latest version.

I haven’t changed what you did, or checked or corrected data. Mostly just adding media, changing icons and so on.

You’ll see how far I got by the icons. Basically I am trying to eliminate the default “pin” icon. So anything with that still hasn’t been changed.

I think this is turning out really well. With a bit of work we can make something really fun and useful. It’s a nice “wow” factor. For someone who is new to the suttas, to realize that these are actual places!

Looking good. Maybe we can add some little Asokan-pillars as placemarkers in the appropriate places too.
In the file placenamesall.kml you can find more descriptions of places that are not on the map because we had no coordinates, but for some there is a general description in the coordinates-field.
For instance, you added Ukkācela as an unknown location, which you can find in this file with the description:

I have added this particular instance to the map now.

you [Ven. Sujato] added Ukkācela as an unknown location, which you can find in this file with the description:

Actually, that was me. I created that layer as I wanted to proceed as non-destructively as possible, and mark my proposed additions very clearly so that they could be easily deleted (or identified for adoption). If they are acceptable (of all of them I think Bārānasī is about as accurate as it’s going to get - not to mention an odd omission from the original list), naturally they can be moved out of this category.

Maybe we can add some little Asokan-pillars

I don’t think we want these in the primary layers, we are sticking with the places from early Buddhism.

But another layer with the Ashokan materials would be interesting, to show the expansion of Buddhism.

Here I’ll just note a few things about the map, not directly to do with geography.