On Mahākaccāna and the spread of Aryan culture to Avanti

Venerable Mahākaccāna is well known as one of the Buddha’s great disciples. Practically alone among these disciples, he spent time in Avanti, which is somewhat to the south-west of the main region of early Buddhism.

Given that the Buddha is not mentioned as being alive in these discourses, it is likely they are set after the Parinibbana, when, presumably, Mahākaccāna moved to Avanti.

Historically, this is interesting for a number of reasons. It marks an early spread of Buddhism out from it’s original home. Avanti itself is crucial in two respects. It is the gateway to the western coastal ports, and thus to the trade routes to the west that were established shortly afterwards by Alexander. 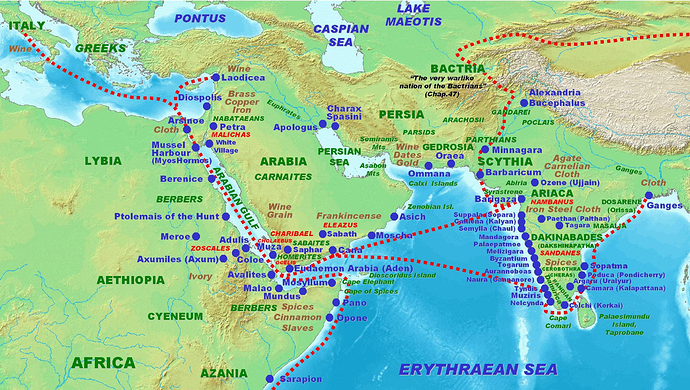 In addition, it is likely that the branch of Buddhism we know as Theravada made its way to Sri Lanka via Avanti; in fact, Mahinda is said to have lived there. 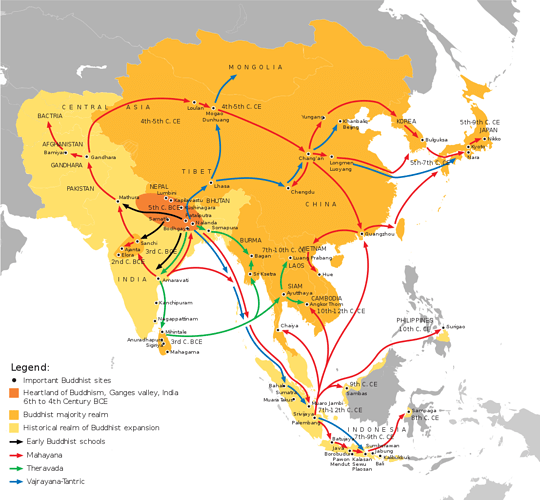 In SN 35.132 we have an interesting sutta, where Mahākaccāna is disturbed in his meditation by a group of rowdy brahmin students, who unleash their abuse:

There’s much of interest in the sutta, but here I’m focusing on the apparently unique term bharataka. As you can see in my (provisional!) translation, I think this is an early, probably unique, use of the term in the sense of “Indian”.

BB seems to take it from bhāra, in the sense of “supporters”, but I think this is a mistake. The point here is that the youths, being overly zealous, fundamentalist brahmins, are criticizing the fact that brahmins, who should know better, support the monks. The burden of the whole sutta is the true nature of the brahmins.

But some background first. Of course we are familiar with the Mahābharata, India’s greatest myth, which establishes the importance of this lineage. It has been argued by Wijesekera that the origin of the term is bhāra, in the sense of the “plunder” carried off by the Aryan horselords.

Be that as it may, the term is Vedic, and the Sanskrit dictionary has a summary of their history. In the legends, Bharata became a great king who conquered most of India. In DN 19, Bharata is also an ancient lineage of kings. Here he is as a boy. Cute!

After some time, the term came to be used as a generic polemical term for India or Indians. Why polemical? Because hidden in the roots of the term is the idea that Vedic Brahmanical culture is the “true” culture of India. The reality is, of course, that it has always been one among many competing discourses.

The remainder of the sutta consists of Mahākaccāna contrasting the decadent behavior of present day brahmins with the virtuous meditators of the past. Leaving aside his more typical analytic style, he cunningly uses Vedic-style verses, showing off his mastery of Vedic culture while at the same time laying down an epic diss.

So I think we should read bharata here in the sense of “true, original, civilized (i.e. brahmanical) Indians”. The aka ending has the same force here as in samaṇaka, i.e “fake”.

It seems that yobbos claiming to be the real, true Whatevers is not a new phenomenon.

Luckily, the brahmin students had a good teacher, and Lohicca found Mahākaccāna’s teachings so persuasive he went for refuge, and invited him to come for alms.

This sutta is set in a time when Aryan culture was becoming established in the region, and we are witnessing here the competition between the Buddhists and Brahmins, a competition that was, for a time, won by the Buddhists.

11 Likes
A mythology of cultural transformation in the Ghaṭīkāra Sutta
On the use of internal references to date the Sutta Nipata
Brahmali July 25, 2016, 3:42am #2

Wijesekera has an essay on bharata in his “Buddhist and Vedic Studies”. The word is derived from bhara, “burden”, and refers to that which was carried off as loot during raids. So here is a whole people named after their habit of pillage and plunder! And these ancient invaders of India were of course no different from anyone else. The Huns, the Mongols, the Vikings – they were all just the same. And let’s not forget the empires, the British and the rest. Humanity is a brutal lot. Yet we keep on worshipping the past. The Indians worship the Rigveda and we all glorify our histories. Our museums are modern cathedrals. It’s madness when you think about it.

Why do we do it? The only reasonable explanation is our need to create an identity for ourselves, and of course that identity must be positive. And so we worship plunder and celebrate tragedy, all rooted in our false sense of self. And because we refuse to see things for what they are, we are condemned to repeat them in the future. Learning from history? Forget it.

Are we any better now? You hear that the world is less violent than ever. But necessity is the mother of invention, and cooperation is necessary in our small world. I suspect that under the surface we are still just the same: the same old defilements, the same distortions of perception and views. The future is hardly bright. We really need to get out of here.

And it’s a beautiful day at Bodhinyana Monastery … really!

We really need to get out of here.