Origin of "Sharing of Merits" chant

I’m trying to find out the origins of this chant:

Through the goodness that arises from my practice,
May my spiritual teachers and guides of great virtue,
My mother, my father, and my relatives,
The Sun and the Moon, and all virtuous leaders of the world,
May the highest gods and evil forces,
Celestial beings, guardian spirits of the Earth, and the Lord of Death,
May those who are friendly, indifferent, or hostile,
May all beings receive the blessings of my life.
May they soon attain the threefold bliss and realize the Deathless.
Through the goodness that arises from my practice,
And through this act of sharing,
May all desires and attachments quickly cease
And all harmful states of mind.
Until I realize Nibanna,
In every kind of birth, may I have an upright mind,
With mindfulness and wisdom, austerity and vigor.
May the forces of delusion not take hold nor weaken my resolve.
The Buddha is my excellent refuge,
Unsurpassed is the protection of the Dhamma,
The Solitary Buddha is my noble Guide,
The Sangha is my supreme support.
Through the supreme power of all these,
May darkness and delusion be dispelled.

We chant this at the Monday night meditation group here at Dhammayanaram Monastery. It predates my arrival here. There are some obvious oddities here, in particular sharing merits with “the sun and the moon”. Any idea where it comes from?

Possibly the Yogāvacara’s Manual, unless there’s an earlier source than this. You’ll find it on pages 3-4 of Rhys Davids’ edition. 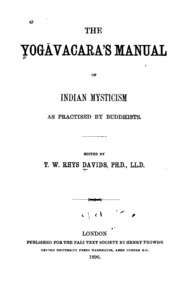 The Yogavacara's manual of Indian mysticism as practised by Buddhists :...

Book digitized by Google from the library of Harvard University and uploaded to the Internet Archive by user tpb.

I remember being told it was a fairly recent 19th Thai invention perhaps written by a princely monk? It’s author is often listed as “traditional” but there is this here:

I believe the verses were composed by either Rama III, Rama IV or Prince Vajirañāṇavarorasa. Whoever it was, he didn’t supply any translation for them. In modern Thai chanting books where there are accompanying translations, some have taken Sūriyo and Candimā to be the solar and lunar devas of these names (as in SN 2.9 and SN 2.10), while others have taken them to be the King and Queen of Thailand.

As with he author of the post above I also remember hearing the sun and moon represent the king and queen of Thailand.

I believe the verses were composed by either Rama III, Rama IV or Prince Vajirañāṇavarorasa.

I think I would now have to discard this opinion. What I wrote above was based on the attributions I recalled seeing in Thai chanting books. But at that time I hadn’t yet encountered the same verses in the Yogāvacara’s Manual which almost certainly predates the three royal eminences named.

Thanks for pointing out this source, which I had only glanced at in the past. Interesting! The introduction by Rhys David’s is in turns wonderful, hilarious and sometimes concerning, but still a scholarship tour de force given the age it was done in, the paucity of material, and that naughty scribe…

The text itself is also fascinating because of the familiarity of so many elements from EBTs, yet contains a sprinkling of practices and concepts that are just ever-so-slightly ‘off-centre’ somehow, but which are still Buddh-ish enough to ring true. I guess this shows the kind of cultural evolution that later commentarial traditions incorporated into their texts . The contemporary inclusion of the Sharing of Merits verses in our own community’s religious services in English shows how easily this syncretism occurs, how little it is questioned, and how solidly it becomes orthodoxy.

Ajahn @Jhanarato, personally, I always felt uncomfortable chanting these verses, knowing that the aren’t the words of the Buddha, and was frequently troubled at people’s disinterest in knowing where they come from, especially because they often form a central part of the proceedings from week to week, or even daily.

Shouldn’t we be concerned about their origin and meaning? The reference to the sun and moon always troubled me the most. Believing that it was a reference to the Thai king and queen at least gave it some cultural context that made it somehow okay, if not quite authentic, but if even that’s gone now…

I guess the verses might be seen as like hymns are in the Christian tradition; later poems occupying a place in the ceremony of worship.

I also remember feeling that these verses reminded me of chanting I used to do in the Tibetan tradition, due to similarities of phrases and subject matter. So, it seems significant that they are regarded as part of an esoteric tradition.

Bhante @Jhanarato I’m interested as to whether you will retain these verses in your weekly service?

Interesting tht it turns out not to have been composed by King Rama 3 or 4.
I have always found this verse very beautiful to chant. I wonder if it’s possible to accept the Sun and the Moon as poetic instantiations of “all virtuous leaders of the world, the highest gods and evil forces, Celestial beings, guardian spirits of the Earth,” etc.
It seems quite hard line not to repeat something nice because it’s not actually a direct quotation form the Buddha.

later poems occupying a place in the ceremony of worship.

In the Sri Lankan tradition, much of the common puja is not Buddha Vacana. I think the most common bits are believed to have been composed or brought to Sri Lanka by Arahant Mahinda.

It seems quite hard line not to repeat something nice because it’s not actually a direct quotation form the Buddha.

(See my above comments of syncretism)

I think my concern is more that it is often inserted into a Puja with other texts that we regard as the word of the Buddha, so people assume it is too, but actually if we don’t know what it is, where it came from, who wrote it, what it means… it seems we should be more conscious of that? Or at least let people know it’s a not the word of the Buddha, which is fine, but important to know. The ‘slippery slope’ is that we just could just end up chanting anything that sounds ‘nice’ regardless of meaning ,or authenticity, or it’s ability to lead to the end of suffering.

Having said that, I usually do join in if it’s chanted, thinking of it as being more like a hymn.

This is a Monty Python reference.