Paruna that Brahma assume he is the Creator

I read this.
It would be nice to find that Paruna

However, in the Puranas, mind came first. The world comes into being when Vishnu awakens and from his navel rises a lotus in which sits Brahma who feels alone and afraid. Unaware of his origins, he creates various living creatures from his mind. And assumes he is the creator, another reason why he is not worshipped.

And I’m like that sounds familiar. I myself always believed the story we have in EBT was a Brahma assuming he is Mahabrahma. But also it would be interesting to compare. Because we also have a counter attack in EBT to the belief that he created the other beings. The Buddhist version the other beings that came down because karma brought out the assumption to it then that made him believe he was Mahabrahma. But we also have that in beginning beings was mind-made. But it seems in India this has nothing to do about the Bible version of creator. 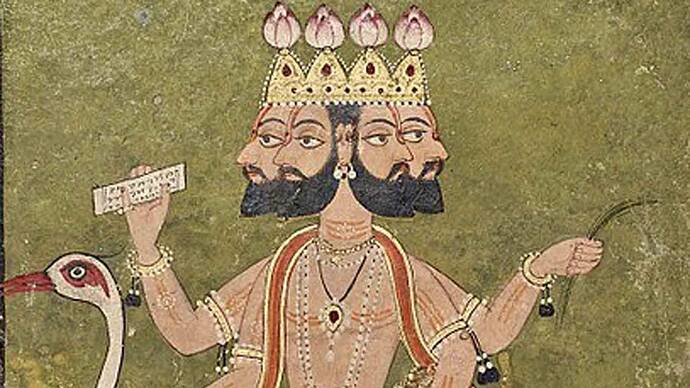 How did the world come into being according to Hinduism?

There is no single story of creation.

Because we also have a counter attack in EBT to the belief that he created the other beings. The Buddhist version the other beings that came down because karma brought out the assumption to it then that made him believe he was Mahabrahma. But we also have that in beginning beings was mind-made.

Hi @Upasaka_Dhammasara , as you probably know, this is in DN27. When the cosmos expands …“sentient beings mostly pass away from that host of radiant deities and come back to this realm. Here they are mind-made, feeding on rapture, self-luminous, moving through the sky, steadily glorious, and they remain like that for a very long time”.

I find this interesting because it also seems to imply that the proces of re-birth is not only dependend on kamma but also of the state of the universe. There are times Eearth is destroyed and i belief also some deva states, so one cannot be reborn there at that time. I do not know if hell realms can be destroyedtoo. Certain realms do never get destroyed. I do not know the exact details but it seems to imply that rebirth possibilites are not always the same for an being, and are dependend on the evolution phase of the cosmos.

It is interessant that DN27 also mentions the aspect of being tempted for the beings here in this world, like the Bible does. Yes, i know it is not the same. But craving arises , ego-centric will (not Gods wil), and beings become gradually coarse. Almost like fallen angels.

You bring an important point of destruction. I am thinking now. I would say impermanence was the beginning. I believe the power in perception of impermanence.

About temptation. Yeah it seems the point of Bible and Buddhists genesis is same. But Buddhists doesn’t actually doesn’t want to blame it on our Selfishness. So called creator Brahma in Upanishads is nothing but the I am of first human. So I think Buddha point was actually there wasn’t an ego. As we can see other Buddhist schools had only Brahma. He was the one convincing Buddha. But I would say that it’s symbolic for Buddha letting go of the Ego. And also the acceptance of the Ego. Meaning there isn’t a reason to hold on to it