Past Buddhas, where in time and space do we place them?

Dark energy increases the speed of expansion, while gravity reduces it. Current science on the matter leans towards the idea that the universe is spatially flat, meaning that instead of a Big Crunch or a Big Bounce (the Buddhist need) we get ongoing expansion, something like a Big Freeze.

So, we (probably) get the red line, not the orange line: 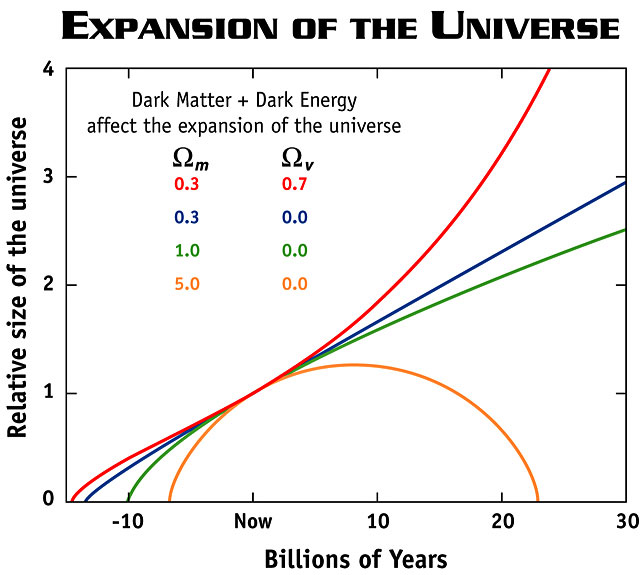 (OT: Maybe we could also compare mind-moments and Planck time?)

Thank you very much for this bhante.

@laurence is your maths aligned with that?

Thanks for flagging that up. It should be noted however that the prevailing consensus is around the orange line, right?

If we end up finding up the red line is the right one then maybe Makkhali Gosala was right all the time!

The description of the end of a universe after a Mahakalpa has run its course (cited above) is SPACE. That is in keeping with the big-freeze hypothesis! There’s a big freeze in between two Maha-kalpas and then a new cycle begins.

I commissioned you to do the maths as you started the ball rolling. Anyways, alls well that ends well!

I was referring to the calcs you did further above. I believe they were not based on the same sources.

An interesting piece of info I found on Buddha Kassapa is:

"The Dhammapada Commentary (iii.250f ) contains a story, which seems to indicate that, near the village of Todeyya, there was a shrine thought to be that of Kassapa and held in high honour by the inhabitants of the village.
After the disappearance of Kassapa’s Sāsana, a class of monks called Setavattha-samanavamsa (“white-robed recluses”) tried to resuscitate it, but without success (VibhA.432)."
Source: http://www.palikanon.com/english/pali_names/ka/kassapa.htm

Does anyone know what does VibhA.432 refers to?

I did no calcs I was just speculating as to a way of coming up with a number. If I was a maths freak it would be possible to attempt the approach I suggested and see if it produces a similar number to the one Ajahn Brahm came up with! It is possible that the commentarial source of the Wiki-Material on the kalpas may have been a consequence of looking at the lifespans of the devas - just like my sweet Ajahn did?

It should be noted however that the prevailing consensus is around the orange line, right?

That is in keeping with the big-freeze hypothesis!

That’d still be a Big Bounce.

that is, 36.8 billion years. This, then, is an estimate of the length of an eon.

So, aeon is a full cycle? Sounds nice then, because if current scientific calculations are correct, and the current age of universe is 13.8 billion years, then it’s just 23 billion years till reboot.

But, AFAIK, current predictions give much greater time for this universe to exist.

That’d still be a Big Bounce.

Do you know any predictions on the time scale of the event?

I remember Ajahn B. joking once when we were working together on a project at Bodhinyana. We were talking about the big-crunch and I said: maybe there isn’t one? He said, maybe all the particles on a collision course may just brush by each other - a near miss - and start expanding out in the opposite direction - no big-crunch. What are the odds?

Blind Freddy could see the previous Buddha stories are staged in ancient India! Where do you think Metteya is going to turn up - in Alaska?

Laurence, I am starting to notice a bit of sarcasm in your posts. This is making me uneasy and the only response would be to move away from interacting with you publicly. Am I wrong?

To everyone. When I started this topic I was really optimistic people would find use in trying to make sense of the accounts of past/ancient Buddhas found in EBTs.

Unfortunately it seems that people so far either misunderstood my open question as an indication that I blindly believe whatever is written or used this as an opportunity to mock and offend me.

To the first group, please note that I was really hopeful I would find people like Ajahn @Brahmali, who offered some reference points to try to understand the time scale the Buddha was probably referring to when he brought up (if indeed he did so) his own memory of how previous Samma Sambuddhas went about re-establishing the Dhamma-Vinaya among sentient beings. I never intended on forcing on others a view neither forcing whatever is found in the text to be taken as truth. Clearly, I was wrong in assuming people share the same curiosity and fascination I have about how among so much suffering and ignorance here and there the Dhamma-Vinaya is re-discovered and how long it apparently takes that to happen again when it is lost.

To the second group, please enjoy, you guys did really make me uncomfortable. I won’t bite back or try to make you guys feel bad. And to @laurence specifically, if you are really close to Ajahn Brahm as you claim I would like to believe that all this sarcasm and malevolence reflects the bit you left yet unaddressed in terms of putting in practice what he teaches.

I do as well know personally and respect Ajahn Brahm and many other senior monks close him (like Ajahn Brahmali) and I believe that if I were to ever have time enough close to them, maybe in an eventual self retreat down in Serpentine, and if they were to be not so busy, they would take on board the challenge researching and making sense of the potential truths behind the potential myths of past Buddha’s using EBTs as a source.

Last but not least. Inquiring about where in time and space ancient Buddhas could be placed does not make in anyway discussing the good and bad in the world nowadays less relevant. Life is not so binary and maybe acknowledging the rarity of the arising of a Buddha or the Dhamma-Vinaya in the big picture of the universe may help us grow in our hearts some samvega and inspire us to develop further the eightfold path in our lives. If we do just this much, I am quite sure, the world will not be left unchanged.

No I am only joking! Coz I like ya I will give you some inside information about Metteya. You know the visionary dream the Buddha had when he was lying down with his head on the Himalayas. Have I got that right? Which way were his feet pointing? I got this info from Ajahn Brahm! You don’t need to take this process personally. We are all harmless Buddhists. You know that? And I love you just the way you are!

What’s not to like - you have a sweet and lovely smile. Is English your first language - something may be lost in translation. Just think of me as a barbarian from Australia. Lacking in a few graces - I do try!

Do you know any predictions on the time scale of the event?

What are the odds?

Of all particles failing to interact during the collapse of the universe? Virtually zero.

According to SN 1.50 and MN 81 the “current” Buddha was a monk under Buddha Kassapa in a previous life.

Before being born into his last life he was a deva in the Tusita heaven. According to AN 3.70 and AN 8.42 the lifespan of Tusita devas is about 576 million human years. I suppose he could have had a shorter lifespan but that doesn’t sound very Bodhisattva-like.

So that would place Kassapa at more than 500 million years in the past.

So that would place Kassapa at more than 500 million years in the past.

That’s about when the first fish were evolving, or even before that.

For the record, my reply (though couched lightheartedly) was a serious answer. I did not intend to mock or offend you or dismiss the question, and if my response did I apologize. It is an important question to have a an answer for internally. It is not necessary to justify or win an argument about it, despite any demanding questions from people.

I apologize for the sarcasm.

This is a very interesting question.