After Brexit? Forget it!

Before Brexit? Forget it!

With its ‘austerity’ agenda, the UK government has not been all that keen on funding regular public services in recent times, supporting humanities research is very much frowned upon, and the thought of subsidising niche cultural interests is just silliness.

Rhys Davids was complaining a century ago that England, despite the fact that it was actually governing the place, committed far fewer resources to Indology than Germany. Things have not improved.

Germany … now there is an idea.
You are talking about millions, but is that really necessary? Like you said, most of PTS materials are very obscure works and most of it (despite the copyright) can be found on the internet (but PTS is not happy about that - see below email). They can continue selling the books with a CC3 license.

They also seem to be happy for SC to use things because there is no commercial gain. Their main worry seems to be how they themselves can survive i.e. that they will not sell books any more if people can download stuff off the internet. But then again, those people who put pdf’s on the internet for free also do not have a commercial gain … so it seems to me that they also do not quite know what to do with the issue.
Herewith the email I received from them some time ago:

I am sorry it has taken me so long to get back to you. The PTS needed to discuss some copyright issues in general. As Margaret Cone’s transcription etc. of the Patna Dharmapada was published by the Journal of PTS, its copyright is with PTS. The pirating of PTS material as pdfs is a problem, as the PTS funds a lot of its support of Pali studies from booksellers. However, I am happy to let you know that you can use the text of Margaret’s Cone’s transcription of the Patna Dharmapada for SuttaCentral.net as we understand that there is no commercial gain from publishing this text.

Of course this begs another question: if a sheppard in Afganistan finds some scroll of ancient text, then sells it and somebody transcribes it and publishes it in the PTS journal, then suddenly the PTS has the copyright to this ancient text??? I don’t think so. It seems to me that the copyright (if any) lies with the person who first wrote it down many centuries ago (and even that might not be correct) and because copyright expires after a certain period of time after the death of the author, all this should be regarded as public domain. If I transcribe it from one medium to another does not automatically give me the copyright.

So I think PTS needs some education as to what copyright is and then assess if they really own copyrights or not.
Is there a register for copyrights like there is for patents and trademarks?
The main motivation behind the reluctance of these organisations to part with copyright is existential fear. If we can take that away …

If I transcribe it from one medium to another does not automatically give me the copyright.

I wouldn’t be 100% sure that it doesn’t (at least not in the UK), I think it might count as a new work. A couple of years ago I attended a talk given by a chap from the UK’s Intellectual Property Office. I asked a question about using public domain material and he responded that if I had sourced it (in this case a C19th map) from someone / a company who had done any work to it, it would be considered a new work and thus protected by copyright law.

I’ve had a quick look on the government’s website to find a statement to that effect, and got a bit lost in links. However, did find this corroborative explanation elsewhere (the third point 3) that gives the Bible as an example.

It’s a bit of a pity that moral law and law law don’t necessarily appear to agree with one another.

Well, at least you got me smiling over the way you tried (not to mention the end result of you telling them you’ll just do a new translation)

The part about the tradition of asking three times and assuming silence then means consent, he he, just great. Your experience of e-mail to website to e-mail to website and having to start all over with explaining to someone else is something I’ve encountered countless times in other contexts, perfect illustration of the endless circle and futility of samasara… As you say, a lost cause, and a loss for them too, that’s the sad thing they couldn’t even begin to see.

if I had sourced it (in this case a C19th map) from someone / a company who had done any work to it, it would be considered a new work and thus protected by copyright law.

This contradicts the UK Intellectual Property Office’s own advice:

according to the Court of Justice of the European Union which has effect in UK law, copyright can only subsist in subject matter that is original in the sense that it is the author’s own ‘intellectual creation’. Given this criteria, it seems unlikely that what is merely a retouched, digitised image of an older work can be considered as ‘original’.

This is a legal doctrine called “sweat of the brow”. It’s rejected in most jurisdictions, including the UK. A copyright comes into effect when there is the expression of a creative work. A selfie is copyright; the numbers in a phone book aren’t.

Having said which, some version of sweat of the brow has in the past been accepted in the UK, but only as applied to works under copyright. However as currently interpreted even this is probably rejected. You can never be 100% sure without a court case, but it’s extremely unlikely that any original Buddhist texts are protected by copyright laws.

It’s a bit of a moot point, however, since all or virtually all of the PTS’s original texts have in fact been released. It’s only the more recent translations that are under copyright.

However, did find this corroborative explanation elsewhere (the third point 3) that gives the Bible as an example.

In this case it is talking about adaptations, not simple republishing. This would apply to translations of the suttas, not to editions of the original text.

Thanks for the support! I find it odd—and again, this is not just Brill—how hard it is to just get a simple answer from publishers. Without wishing to read too much into this one event, the impression I get is that the whole area of rights and copyright is like an existential nightmare for them. They just freak out a bit whenever it’s mentioned.

I just ordered Ven. Nanamoli’s translation of Petakopadesa. Should be here within 10 days. 45$ us dollars. Ouch. Unfortunately I’m still not fluent enough in pali to just read it from the source and have confidence I’m understanding it.

I wish they a digital edition so we can get it instantly, easily search for terms in the bookk.

Anyone else own this work, or read it?

=D may be that nightmare will lead some sometimes to disillusionment, and going forth. The futility and emptyness of acquisition and ownership of DIY creativity and thought.

Metta to those mired in the nightmare of copyright law.

I wish they a digital edition so we can get it instantly, easily search for terms in the book

I found this on Scribd: 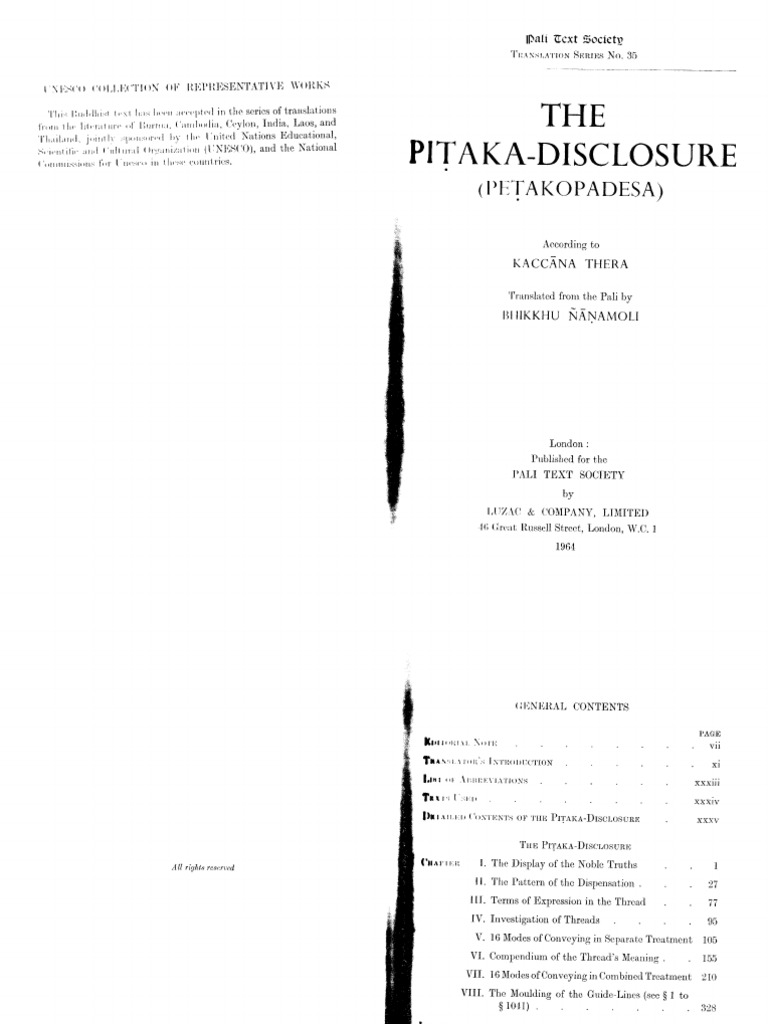 Thanks for the link. Sadly, it’s inaccessible without a paid account. And once again copyright does its job: fail to protect the income of creative workers while ensuring that no-one can read a scholarly book by a Buddhist monk, who didn’t even touch money, and who, incidentally, has been dead for over half a century. Nyanamoli’s work will all be out of copyright in 2030. Yay?

I have downloaded it for free (with some googling tricks

). If you or others are interested, I can send the link (via private message).

For anyone who reads Thai, there’s a very fine translation (alongside the Pali text) by the Bhūmibalo Bhikkhu Foundation. A scanned copy in six parts can be downloaded here:

I don’t know anything about this group: could you tell us a little about them and their work?

Yes, bhante. It’s a Pali text publication and translation foundation, founded in 1973, based at Wat Saket in Bangkok, and formerly sponsored by the late King and now by Princess Maha Chakri Sirindhorn. Its editors and translators are mostly Thai mae chees and ex-bhikkhus who had reached an advanced level in either the Thai or the Burmese pariyatti system before disrobing.

The greater part of their work consists in the transcribing into Thai script of the Burmese Sixth Council texts, supplementing these with variant readings from Khom, Lanna and other regional editions that weren’t represented at the Council, the translation of the same into Thai, and their publication in easily affordable paperback editions. As the Foundation’s volunteers are doing their work for merit rather than money, the quality of their output (predictably enough) is very much higher than that of the monks at Bangkok’s two monastic universities (who are not only paid, but paid by piecework, which often results in hurried and sloppy work).

Of their work to date there probably isn’t much that would greatly interest those involved in EBT studies. The bulk of their output has been atthakathās, ṭīkās and yojanas (mainly to Abhidhamma and Vinaya texts), Pali grammars, and a multi-volume Pali-Thai dictionary.

Here’s a video intro to the Foundation…

Oh, nice, well it’s good work that they’re doing. I had a quick look through the website and, as you say, it was mostly later texts. Which is of course valuable, but it would be nice to see some updated Thai sutta translations!

The Paṭṭhāna seems to be digitized now: 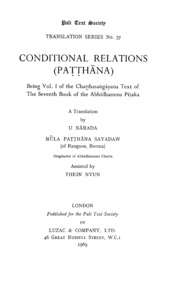 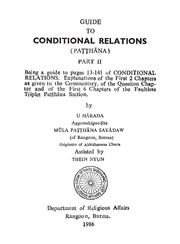 Is there a plan to have the translation of the Paṭṭhāna on SuttaCentral in the near future?

Also, I was wondering, the PTS says that in 2013 they voluntarily released these texts under the Creative Commons Attribution-NonCommercial 3.0 licence. But isn’t the Buddhist Manual of Psychological Ethics (the translation of the 1st book of the Abhidhamma) free of copyrights since 2012 anyway (since Mrs C.A.F. Rhys Davids passed away in 1942 so more than 70 years ago)? 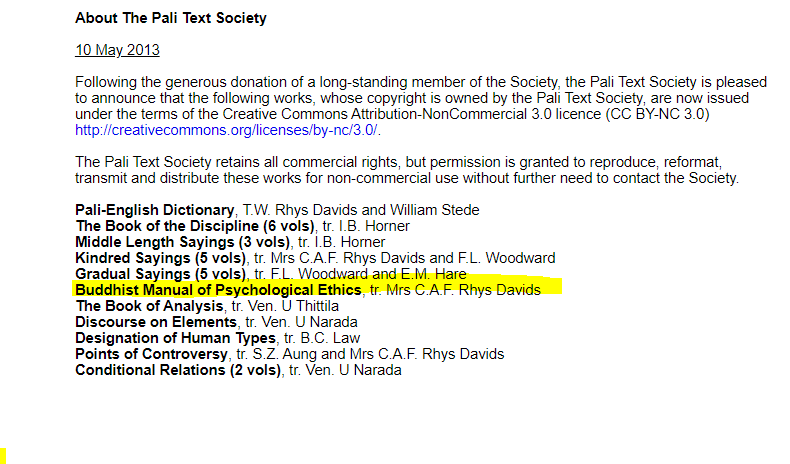 I think I was referring to actual digital texts, not just scans. Getting the Patthana into a proper form would take a lot of work, and no, we are not going to undertake it any time soon. However if a volunteer wants to do it, we’d be happy to support them.

But isn’t the Buddhist Manual of Psychological Ethics (the translation of the 1st book of the Abhidhamma) free of copyrights since 2012 anyway (since Mrs C.A.F. Rhys Davids passed away in 1942 so more than 70 years ago)?

It would seem so. But it is, unfortunately, normal for publishers to assert rights that they do not have. Legally, it seems there is no penalty for doing so, so it happens constantly; for example, virtually all the Buddhist roots texts have copyright claims against them, even though obviously there is no copyright. It’s as if I could walk down the street and claim ownership of a house that I happened to like, and that claim would legally stand unless the actual owner contested it in court.

Bhante I have posted a link to download a Petakopadesa pdf that seems better to make digital. I would love that.

It seems this pdf can be converted to text easier. It really understandable. It doesn’t even seem scans.

Thanks. It is a good quality scan. You can try converting to text if you like, but this kind of complex book usually doesn’t convert well. It will require a lot of hand editing afterwards.

Yeah. But I was thinking there was a very good program. I understand.