Phallus next to Buddha statues in Thai restaurant

I spent New Year’s Eve at a Thai restaurant in Manchester.

The atmosphere was really good, and the staff were of various nationalities.

What really put me off was that there were phalluses right next to the Buddha statues which greet one as one enters the restaurant!

In addition to taking pictures of what I thought was really inappropriate of the restaurant owners and insulting towards the Buddhist religion, I spoke with a couple of staff about it.

Since the first was really a waitress or cleaner and she was Spanish, it didn’t work out, though I spoke courteously. So I went to the kitchen and found a Thai lady. I spoke to her gently, making friends first, and talking about Dhamma. Then I hit her with how inappropriate this is and that she should tell the one responsible to take it down.

She simply said that it was for “good luck” and some other superstitious stuff I didn’t get.

Well, I ended it all with the friendly way I began, but I am wondering whether I should go again and see if they have taken it off. I think actually that even a Buddha statue in a restaurant which sells alcohol is inappropriate. But fair enough. But a phallus? 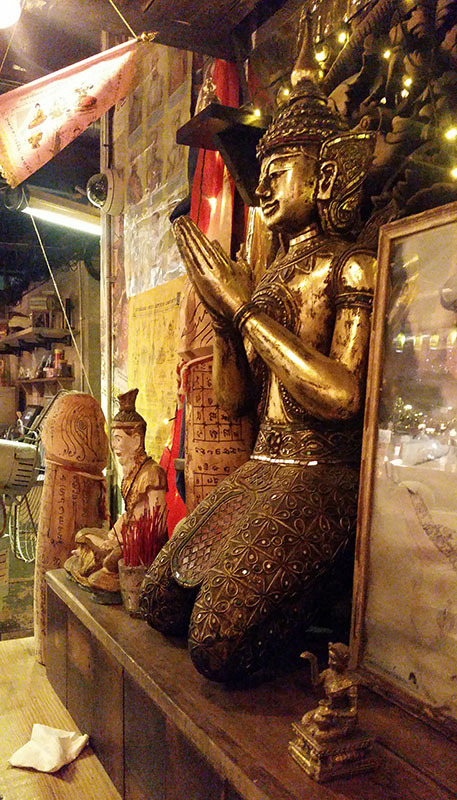 I wasn’t really too affected and I had a great New Year’s Eve! Just that it is something that shouldn’t be there.

Palad Khik (Thai: ปลัดขิก, pronounced [pàˈlàt ˈkʰìk], rtgs: palatkhik) is a kind of Thai Buddha amulet that is shaped like a penis. The phrase “palad khik” means “honorable surrogate penis”. These amulets range from a few inches to several feet long in length. The smaller versions are usually worn on the body while the larger versions are displayed in shops and other establishments.
(…)
Shop owners display them in their shops or in the cash register area to protect their business and also bring good luck and sales. A notable feature of this type of amulet is it can be worn in places considered as lowly or unclean such as bars, gambling casinos and brothels. Normally, you cannot bring a Buddhist amulet inside such establishments. Palad Khik (Thai: ปลัดขิก, pronounced [pàˈlàt ˈkʰìk], RTGS: palatkhik) is a kind of Thai amulet that is shaped like a penis. The phrase "palad khik" means "honorable surrogate penis". These amulets range from a few inches to several feet long in length. The smaller versions are usually worn on the body while the larger versions are displayed in shops and other establishments. Palad Khik originated in India and relate to the Hindu god Shiva, who is usually represented by Shiva Linga. They were br...

I still find it disrespectful for a phallic symbol to be right next to a Buddha statue.

But maybe I must learn the point of view of Thai culture.

I am most concerned about the kind of impression non-Buddhists who go to that restaurant will get about Buddhism.

What really put me off was that there were phalluses right next to the Buddha statues which greet one as one enters the restaurant!

It appears some Hindu influence there.
However this could be some attempt to get attention. (marketing)

Is it right, wrong, or somewhere in the middle?

(I meant a bit of both right and wrong, but the way I put it may have appeared humorous).

I hope that palad khik was not consecrated by Wat Sattahip’s Luang Phor Yi. They have a habit of “standing to attention” when LP Yi chants the mantra to activate them.

Anyway, I know a Cambodian monk who pours scorn on the Thai monks who consecrate palad khik. Not because he thinks it base or unmonkish, but he thinks that the empowerment ritual is not up to the Cambodian standard and protocol (eg no consecration within the siima etc). Looks like Siva has been co-opted into Cambodian Buddhism, but care is taken to separate the mundane from the supramundane.

my initial perception was…where is the buddha image, I.e are ‘buddha’ images that -we who have faith- find pleasing and wish to have respected and placed in appropriate places, and buddha-rupangs that are used as objects in relation to commercial gain. this year near.where.I live in lombok indonesia there was a scuda dive place that used a buddha image in its advirtisement, same kinda thing.

I wouldn’t worrry about it its just ‘loka dhamma’ asata sampajanassa, since wheb did the buddha ever wear pants anyways or wear crown, thats not an image of the historical buddha , its just wordly uccaro pasavo ti.

since wheb did the buddha ever wear pants anyways or wear crown, thats not an image of the historical buddha

You are very right Bhante! I am quite sure this is not even an image of Buddha but instead one of an anonymous kneeling deity (theep) with its hands in Añjali Mudrā.

I can recall seeing such theep statues in altars of local temples’ uposata halls and shrines, always turned towards an image of Buddha and sometimes used at the entrance of nice hotels and restaurants.

Moreover, for the sake of clarification the old guy with a top knotted hair shown in the altar depicted in photo seems to be of an anonymous rishi (rue-zih). To learn more about the meaning of this image check the Wiki linked below.

It is interesting to me that the local Thai legend/folklore is that the Jivaka found in the Sutta and Vinaya Pitaka, who was the Buddha’s doctor, was as well a rishi. Rishi (Sanskrit: ऋषि IAST: ṛṣi) is a Vedic term for an accomplished and enlightened person. Rishis have composed hymns of the Vedas. Post-Vedic tradition of Hinduism regards the rishis as "great sadhus" or "sages" who after intense meditation (tapas) realized the supreme truth and eternal knowledge, which they composed into hymns. According to Indian tradition, the word may be derived from two different meanings of the root 'rsh'. Sanskrit grammarians derive this word from the second meaning...

I can recall seeing such theep statues in altars of local temples’ uposata halls and shrines, always turned towards an image of Buddha and sometimes used at the entrance of nice hotels and restaurants.

Moreover, for the sake of clarification the old guy with a top knotted hair shown in the altar depicted in photo seems to be of an anonymous rishi (rue-zih).

This is all a bit of a relief!

They are just images. Why does any of this matter? I don’t recall anywhere in the suttas where the Buddha says his followers should go around demanding that their worldly symbols should be respected.

On the other hand, we do know he warned against harboring resentful thoughts about being insulted or abused.

I appreciate your thoughts, and they are correct. I was concerned about the impression people would get about Buddhism when they see a penis on a Buddhist altar.

please don’t be like the Muslims and some, but luckily very few, Western Christians nowadays, be a Buddhist
in Russia getting even, taking to court and filing criminal charges for offending religious feelings of Orthodox Christians, or rather who portray themselves as such, is a movement and this is ugly and disgusting

just an example: recently they charged a blogger who played Pokemon GO! in a cathedral and then published the video on YT

but I am wondering whether I should go again and see if they have taken it off.

no you shouldn’t, leave it, them and yourself alone, and they don’t have to take off anything, UK is still a free country i suppose, nor you own the Buddha or rights over his statues and the way they should be handled

if you don’t like it, don’t go there any longer, problem solved

I also think your post was really polite and courteous towards someone who thought of standing up for the dignity of the Buddha and Dhamma when he wasn’t aware of cultural implications so as to prevent Buddhism from getting a bad first impression!

But yeah you’re right. Not my problem.

Hi guys,
Just a reminder to please be respectful and courteous of each other when discussing on this forum, understanding that others might not share your view of things.
Thank you 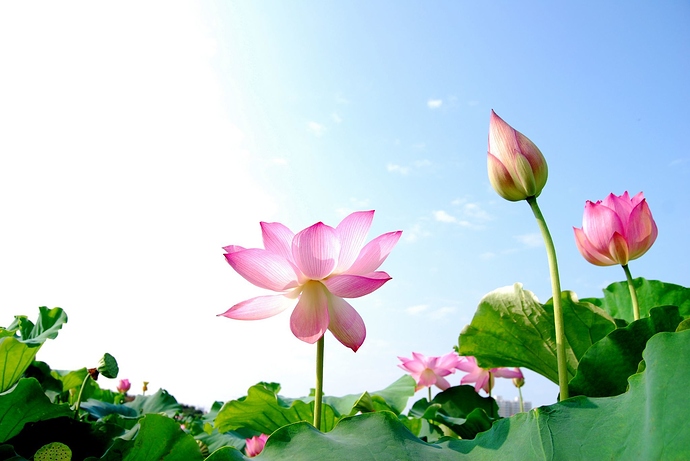 I think you should give @LXNDR some slack. I generally agree with his sentiment, even though I find some of the trns of his phrase to be too polemical and my personal approach is a bit more nuanced. So, I would fine the Pokémon GO guy or make him do public work for a month or so, since his conduct was a deliberate offence of religious feelings - but prison is way over the top, of course. Nevertheless, I think we can all agree LXNDR has a point. On the other hand, LXNDR has to give you some slack as well, since you way of reacting to these images is thankfully very far from the Muslim trends or Russian authoritarian justice: I think it presents us with a workable way to negotiate such thing in our diverse multi-religious world

In your particular case, you did all you could. You asked this Thai lady nicely about the whole Buddha-next-to-a-phallus business, you found out it was not a deliberate offence - which is why the restaurant wouldn’t be fined in my ideal world - you even tried to correct these horrible design ideas. You may talk to the Thai lady again if you feel like it, but it’s not really something you should get worried about. If the phallus is still cringing you, just stop going to that restaurant, that’s it: I personally stopped going to some places because I really hate to see Buddha images right next to bottles of booze. Yeah, the Buddha Himself doesn’t care anymore and would likely not have made a very big deal about it back in his day, but I think he would not have been very happy about people not giving a thought or two to some very basic religious sentiment

As for me, I really hate both Buddha images and phalluses (phalli?) at restaurants. I hate the Buddha images for the same reason I would hate to see a large crucifixion or a big Virgin Mary icon or a humongous Quran in a place like this: it’s just inappropriate, in my view it is inappropriate to the point of utter tastelessness. Second, erect phalli (phalluses) are just as not welcome anywhere near my food as gaping vaginas, steaming faeces or anything overly physiological

To be clear, as suggested above, the image on the shrine is not a Buddha image, but a deity usually invoked for prosperity/fertility.

In my six years in Thailand I rarely recall seeing a phallic icon, but that’s probably because they’re not found in forest monasteries. Wherever I have seen them, they are clearly demarkated from the Buddha, on a separate and lower place.

It’s kind of hilarious to me how anatomical they are, as compared to the India Shivalingam, which is so abstract that many Hindus do not know what it is, and are horrified when they find out. You don’t have that problem with the Thai version!

Thai culture is very elaborately stratified and layered. It’s all about keeping things in their place. There’s no problem with worshiping the Buddha and worshiping a phallus, so long as they are each in their own place.