My name is Tasfan. I’m a Buddhist translator from Indonesia.
I have got a unique request from a university scholar on the perspective of Buddhism in Deradicalization Programme (designed to prevent and do deradicalization, rehabilitate, reintegrate them to society). Whether we can set up a comprehensive inside-to-outside real changes in individuals who had done or supported terrorism (defined here as the acceptance of a religious doctrine to seize power and used violence and hatred as one of the means to achieve that).

The current programme in Indonesia only attends to the perpetrator from certain religions only (No Buddhist in Indonesia, fortunately, had gotted into the program yet, but there is no programme specifically catered for Buddhists). The current programme was based on countering dogmatic beliefs by using countering verses, and some of the derad facilities outsourced the programme to third party providers which are not uniform or reviewed.
So, the changes in belief and behaviour is only conceptual, not coming from inside.

The researcher is therefore interested in Buddhism ways of meditation, view-checking, training to induce inside-to-outside change.

So I would like to ask for suggestions and maybe systematic approach/sutta/training/meditation which may contribute to Indonesian derad programme. Hopefully, it may even influence the other derad programmes so that the impact won’t be superficial or conceptual anymore, but produce real change into more tolerant, open-minded, kind-hearted, and wise individuals.

Hey Tasfan, thanks so much for bringing this here, it’s an awesome idea. It’s great sign that they are reaching out to people with a genuine knowledge of Dhamma for help.

I can’t speak from experience, but only some suggestions.

My first suggestion would be, don’t put too much emphasis on intensive meditation. For people in such situations, they are likely to be emotionally fragile or unstable, and intensive meditation may cause the opposite effect than is wanted. They’ll get so caught up in their own mind, paranoia and delusions could easily grow.

Rather, I’d emphasize service, community, study of basic Buddhist ideals, and a moderate introduction of a meditation practice.

One thing they did in Australia after the Cronulla riots a few years ago, they took a bunch of the young men walking on the so-called “Kokoda trail”. That’s a super-tough track in Papua, which was famous battleground for Australian forces in WWII. Taking them out there was a good way to build bonds, and to get people out of their narrow resentments and appreciate their lives.

One of the things that this acknowledges is that underlying a lot of extremism is not really the ideology; if it’s not one thing, it’s the other. So much of it is built on the psychology of young men, their propensity to violence and need to express a tough masculinity.

So we have to understand that simply getting young men like this and telling them to be nice to each other isn’t going to be very effective. Engaging them in something hard and physical and exciting is likely to be more effective—but of course, that’s not really our area of expertise!

I guess what I’m really saying here is that we should be cautious about claiming to have all the answers. For some people, the Dhamma and Dhamma measures may well be effective. But a lot of them are just not there yet, and that’s okay, they just need to start somewhere.

A little talking, a lot of doing.

Thank you Bhante for the great insight and advice. I will surely convey it. ^^

I guess what I’m really saying here is that we should be cautious about claiming to have all the answers. For some people, the Dhamma and Dhamma measures may well be effective. But a lot of them are just not there yet, and that’s okay, they just need to start somewhere.

This one really hits home. I learned so much just from this and will be careful in providing giving recommendations.

Once her thesis is done, I will maybe post a draft here so that people can comment.
This is an uncharted territory, but exciting one!

The suggestion of doing more than talking reminded me of the programs in the U.S. that aim to rehabilitate prisoners through caring for animals. Participants learn to modulate their behavior to develop a relationship with the animals in their care, and to value someone who’s a vulnerable “other”.

OMG that sounds so lovely!

I think so much of the extremism we see ultimately stems from a lack of meaning, an emotional absence. It gets so easily filled with our worst impulses.

Oh! I just saw Julie Chernov Hwang’s book about this! What did you think of it?

I’m reminded of what the Buddha said:

and, of course, the passage to Ananda about good, spiritual friendship also came to mind.

I can only heartily agree with Bhante’s wise words about giving young men something to physically do alongside good role models. I’d just like to point out that this isn’t entirely outside the realm of traditional Buddhism though, as this is essentially how the Thai Forest Tradition handles restless, young monks such as myself.

This is very useful.

Thank you so much ^^

Thank you so much, Bhante.

Will certainly forward the book recommendation.

Yes, I will translate the quote on kalyanamitta as well to her.

as this is essentially how the Thai Forest Tradition handles restless, young monks such as myself

Well I can’t comment about yourself, but yes absolutely. Lots of tudong, building, chores, good healthy activity. It’s the kind of thing that can’t readily be packed as a “method”, but it’s an incredibly important part of the lifestyle.

Not sure if it is exactly relevant, but The Buddha’s Teachings on Social and Communal Harmony by Bhikkhu Bodhi might be relevant. I don’t remember the details, but I think there is an afterword by the person who requested Bhante write the book that might tie it in.

When I first saw your post title, I thought it was going to be about the alt-right transformations happening in a certain on-line Buddhist community.

Yeah, it was a hot, dry year last year here too. For us that doesn’t mean bushfire prevention but hauling water.

Here you can see our reservoir’s pump exposed to the open air after years of being under meters (!) of water: 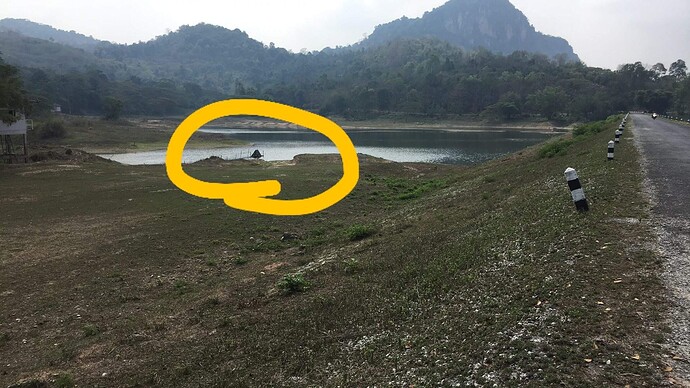 To tie this back to the topic at hand: with climate change there is no shortage of work that needs to be done. We just need governments to help organize and encourage people to do it. The alternative is unemployed nihilism, which we’re currently seeing ravage the e.g. American countryside with a corresponding uptick in extremism, visible even in online Buddhist communities.

I have many years of Counter-terrorism & Peacekeeping experience (I was an officer in the Army - retired after 23 years as a Colonel). In my experience 99% of young people get into these kinds of things because of a lack of Education (especially spiritual) & the lack of a satisfying role in Society. Full of anger against things in general, they are easy pickings for ideologues who promise them Excitement, Adventure, Purpose, Rewards, Respect… Join up now! Uncle X wants You

IMO, learning to ask the right questions, developing Insight into the way things are and finding the path to Peace are the hallmarks of the 4 Noble Truths … and also the way to the end of being exploited by vested parties.

That sound really interesting, can you tell us some more about it?

In many cases the animals are dogs that need socialization in order to be adopted. Helping the dogs learn to trust, to let go of fear and anger, is an indirect way to introduce those processes for the inmates to use themselves. Some programs provide grooming services to prepare companion animals for adoption, which teaches a skill that can be used when they’re released from prison.

Very much like gang recruitment. Young men trying to fill a gaping hole in their lives with a purpose ( whatever it may be).

Lack of social opportunity also is a factor ( although some well-to-do people do join up, most are disadvantaged in some way)

…uptick in extremism, visible even in online Buddhist communities.

For a Canadian perspective…

A Look at Anti-Radicalization Programs in Canada

Deradicalization has gained popularity in Canada, though some experts still question its effectiveness.

can you tell us some more

Sure! But first a disclaimer: What I am about to say comes from the perspective of a professional soldier. Some of it may seem distressingly cynical or even hopelessly naive, but that is simply an aspect of examining the same human society from different viewpoints. These views are personal, they are not representative of any official policy. Just as a monk in any tradition is bound by the vinaya, so a soldier of any nation is bound by the Army Act and Official Secrets Act.

Human history has always been defined by the extremes of War and Peace. The two appear to occur in a cyclic fashion and no region or human society is exempt. Extremism is a form of undeclared war, promoted by vested interests who have no appetite for outright confrontation, but who seek to profit from never ending low grade conflict.

Why do young men fall for this? (Young women seldom do- and if they do, they are far more likely to be hard core ideologues). A Global Assembly workshop held in 2016 identified the following root causes of extremism:

which if simplified further boil down to the two things I mentioned previously - the lack of a meaningful prospective role in Society and the lack of an Education which would equip them with critical analytical and emotional skillsets.

Something that is often underappreciated is that this very same Target population of disenfranchised, embittered young men provides the cannon fodder on both sides. There is literally no difference in the ideological training provided by Governments versus the Militant organizations they are fighting. And many a times, it is actually a rival Government funding the Militant organization, including providing armaments and instructors. The smoke and mirrors have now reached an extent where certain intelligence agencies are funding and training the very same militants that their own government troops are supposedly fighting!

Let us not think that we, the middle class intellectuals of the world are somehow outside this vicious circle. The violence is enacted in our name and for our tax / charity / consumer consumption dollars.

The beginning of the end for this Monster is for people to start asking “Why?” Why are my nation’s troops in a land that doesn’t belong to them and where they aren’t welcome? Why don’t politicians who support violent interventions lead the troops into battle as did the kings of yore? Why should any decent young man sign up to go and kill other young men whom he has no grouse against? Why can’t we have a dialogue? Why can’t we share whatever little we have with others?

Buddhism is unique among the religions of the world in that our scriptures encourage critical thinking skills and discourage unthinking obedience. As Ajahn Jayasaro is fond of repeating, Buddhism is a supremely comprehensive system of Education.. That is why I feel that the Buddhist Path is the way to Peace!

Kabir, I’m literally getting chills now reading this. It says so many things I have believed for a long time, so well and so succinctly.

All I can say is, if the armed forces of the world have more people like you in them, perhaps there is hope after all.

Thank you so much for the insight.