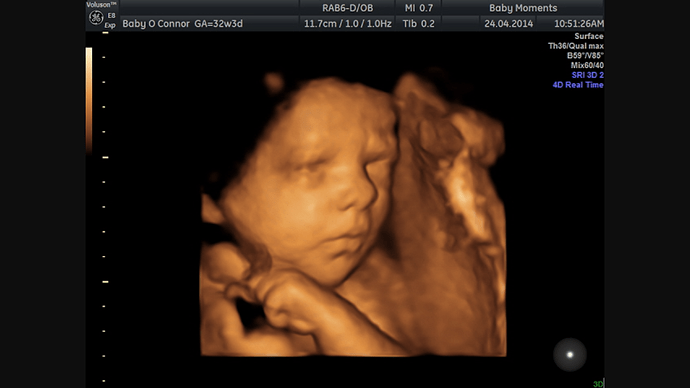 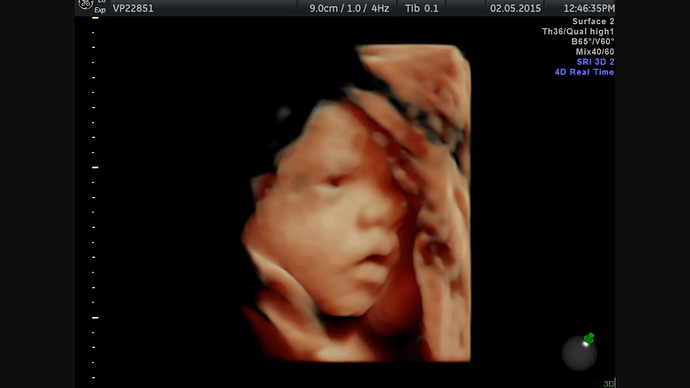 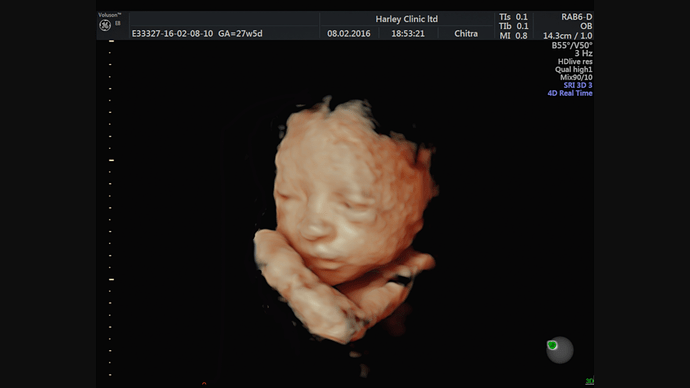 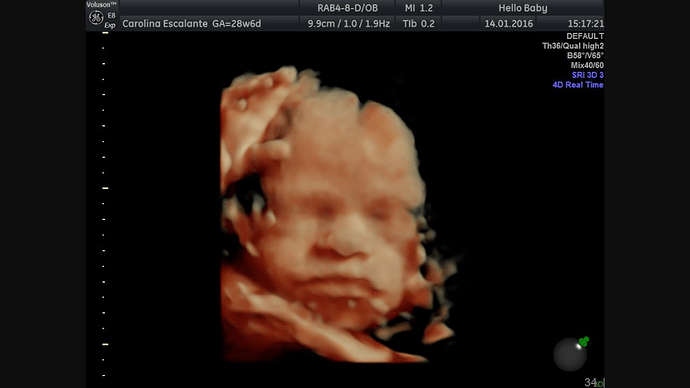 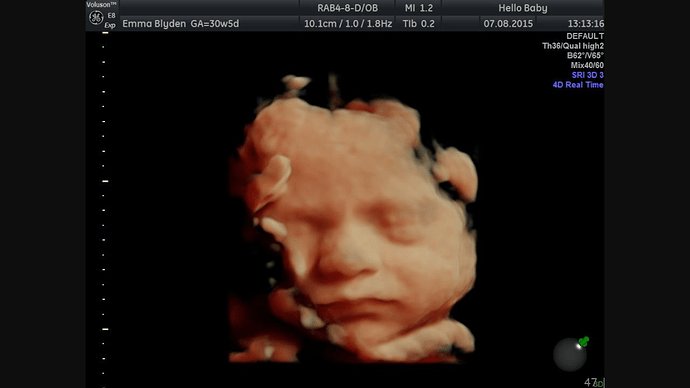 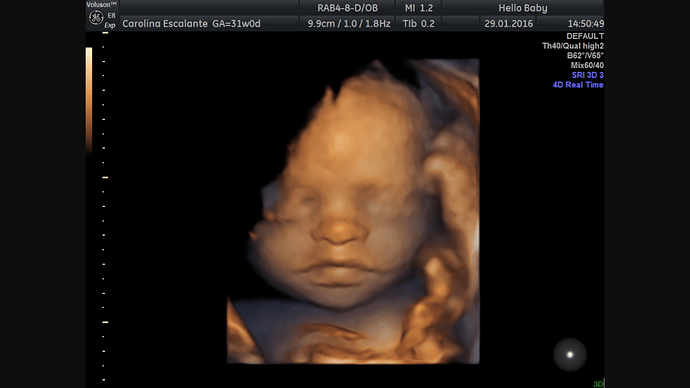 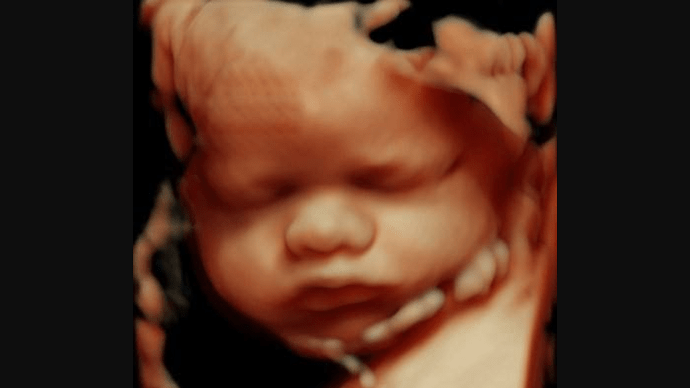 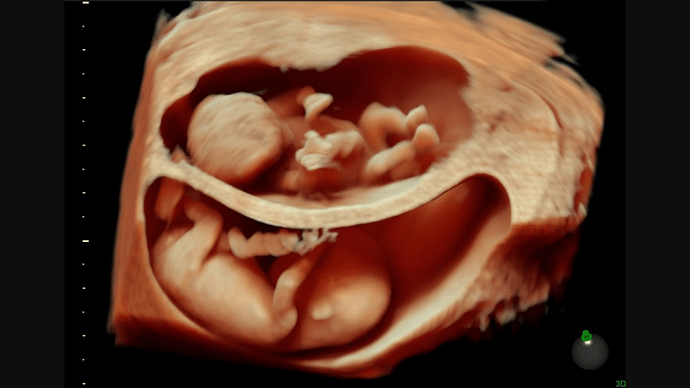 … i thought the womb was supposed to be peaceful…
Is it me or are these expressions kind of adult? Far from the happy baffled look we adults find so charming… I don’t think I’ve ever seen a baby pull any of these faces - what do people think? I’ve selected just a few that I like but there’s hundreds on google and every other one has a pensive expression … , complex , varied and all somehow ‘knowing’ -or is it -‘not knowing’?

It’s a squished baby face because there’s not too much room in there. Maybe you’re coming at this with some conclusions already in place?

Then of course there’s this:

Pareidolia is a type of apophenia, which is a more generalized term for seeing patterns in random data. Some common examples are seeing a likeness of Jesus in the clouds or an image of a man on the surface of the moon.

Another piece of moon apophenia is seeing a rabbit in there. And so on. It’s easy to project our own moods & ideas about mental states onto other animals: babies, when we see a dog panting and think it’s smiling but maybe it’s just hot, etc.

All valid suggestions, they are under water for instance- but then they can open their eyes freely, why the furrowed brow, which I’ve observed in these images again and again. One child was looking side ways. While u were responding I was reflecting more on what I think I keep seeing. I think they are looking back, and looking forward , and it’s troubling them all.

I have an anti-natalist position, so these images strike me as rather tragic, but those babies likely haven’t got a clue yet.

How do you know it is a fact?

By doing some reading on neonatal smiling, I guess.

(Shall we turn this into a thread about epistemology?

Yeh let’s crack on mate I’ll have a go

But I would be interested to know from where the assertation that these expressions are unconnected to an emotion. As I understand it muscles affect the brain as much as the brain affects the muscles.

I guess my reading & consideration suggested it as likeliest, so I said they likely hadn’t got a clue. Have another opinion here, surely there’s room. I simply find current findings align with it being an early reflex, where emotional states can’t really be assessed.

So, there’s space for speculation, but I’m kinda convinced by DN 1’s discussion that views based on feeling are really troublesome.

(EDIT: This ‘fact’ is a word I use for virtual certainty, as opposed to absolute certainty. I’m claiming that the best explanation fits within currently-established “strong-likelihood-facts”, but the door is open for more evidence.)

Please don’t get me wrong - I welcome other opinions, they help me , I just wondered if there was a specific piece of evidence which lead to the perceived facts … my problem with your assertion is that babies ARE incredibly emotional- it’s all they have? I find it incongruous that unborn babies are without the ability to think or feel emotion throughout gestation then bam! The moment they breath air something switches on and then they’re at once completely and totally 100 percent emotion

Well, that’s a simplistic view of child development; it’s going to take reading the research, instead of deciding what feels obvious. I mean, no one claimed that “bam!” was how it happens, so ideas are kinda bumping into each other, or something.

Quite possibly daverupa. I would argue that mine is the less simplistic argument here, but I’m not attached to the idea. Maybe they are meaningless. Im coming from it from an artists perspective, I suppose. I see profundity and complexity in those faces. Other people may not which is completely their prerogative.

Im coming from it from an artists perspective, I suppose.

I often completely forget about that sort of thing, actually, but even then I’m rather stodgy. For example, trying to shift that way now, all I see is broken terracotta pottery.

Thats fair enough… you said you were coming from it from a antenatal viewpoint which I don’t have… I’m a woman of a certain age but don’t have or want children, so perhaps that colours my judgement. And it’s true that I was selective in the pictures I chose… many of the babies appear very comfortable- a result of previous choices , I would still argue.

Whatever their meaning, I find them astoundingly beautiful , which is surely good for me to muse on. Not knowing whether I’m right or wrong, being ‘lost’ is for me a wonderful place to be. Attachment leads to suffering after all…