Thank you! Just for general information, I’ve found that The Mahavastu is also available on other sites. I have downloaded pdf versions of the three volumes from “forgottenbooks.com”. This will allow me to work off-line. I propose to start at the beginning of Vol 1 and work my way through. If others want to help, sections can be divided up accordingly.

Great. I think forgotten books gets it from archive.org, so whatever is fine.

It’s a hot mess of a text, but there are lots of nice things in there!

Shall I copy the text from the html file you created into a word document for editing purposes?

No! Please edit the HTML file in a text editor, it will be a nightmare to edit in a word processor.

I use Sublime Text for editing, but any capable text editor will do. The main restriction is that they have to be able to handle large files, which rules out Atom and some others.

Sublime Text has a spellchecker, powerful regex, customizable appearance, and pretty much everything you’ll need.

Ok. I’ve downloaded Sublime Text and I’m away! Thanks for the opportunity to help. It looks like a juicy text and I am looking forward to getting my teeth into it. Would you like updates? I’m not sure if it would be useful to you, but if you want, I can email you the updated file every now and then?

Great. How about make a start of a page or two and send me that so I can check it. But mostly it should be okay.

How are you with inputting Pali/Sanskrit diacriticals? We had a thread on here some time ago that talked about methods for doing this on the different operating systems.

Dear all I would like to learn from you, how you insert Paali words into discourse.suttacentral posts (or into documents in general). Currently, I am stuck to spelling out a "long a" as "aa". Also, I would have to spell out a short consonant for example as "t.", so this gives for example: "satipat.t.haana" However, I saw that a number of people used the correct Paali character set in their posts. Also, these characters are used in the Paali-Suttas on suttacentral. I just discovered that th…

Ok. Once I’ve done a couple of pages I’ll send you the updated file. Again, thank you.

Diacrtics are fine. I use them regularly in MS Word. I haven’t checked it out yet but I assume if I have a letter with a diacritic in Word, I should be able to copy it straight into Sublime Text. Either which way it should be ok. (I’ve probably had greater challenges inserting diacritical marks into websites. Platforms such as WordPress aren’t always diactritical friendly.)

if I have a letter with a diacritic in Word, I should be able to copy it straight into Sublime Text

You can do this, but it’s clumsy. It’s much easier if you have a system-wide way of inserting them, then you don’t have to worry what application you’re using, or indeed if using them online. The thread I posted before gives solutions for all major operating systems. Only Linux has a native implementation, which is pretty sweet. But there are hacks for other, inferior, operating systems.

One detail which might seem silly, but is actually quite useful: make sure to use an editor font that is designed for legibility. (Hint: not Arial or Helvetica.) You have to clearly distinguish between things like l, I, 1 and other commonly confused glyphs. The text has a large number of these confusions (since it is OCR) so it’s important to catch them. I use Source Sans Pro, which is free, excellent, and has all the glyphs you need.

Ok, sorry, I shall have a more detailed look at that thread (I only read the first bit).

I’ll also make sure I use Sans Pro.

I’ve only just started this text, but based on the Early Buddhism course you and Ajahn Brahmali gave in 2013 and the subsequent book “Authenticity of the Early Buddhist Texts”, I would have supposed that this text does not fit the criteria of what is ‘authentic’. Is there however some suggestion that the Mahavastu may be authentic and therefore things like the Bodhisatva career has (at least some) legitimacy and that this text fits at least some of the crietria scholars use to determin authenticity as we define it?

It is a large compilation of texts, which readily pulls from anything from the early suttas and Vinaya, to verses, to Jatakas, to Mahayana sutras, all loosely arranged to tell the life of the Buddha, and included in the Vinaya.

The compilation is late, but it includes a variety of early materials, and other passages which, while not early, are still interesting, such as the many Jataka stories, which often give a different take to the ones found in Pali. The intorduction to the translation gives more details.

i never used this piece of software but suggest fiddling with encodings in the program settings, the correct encoding must be UTF-8 i suppose, this is what works in the Notepad++ at least

Possibly this is the browser not reading your encoding. Usually we find that Chrome is very forgiving, but with Firefox you have to specify the Unicode encoding in the page header. Not sure about other browsers. I use Chrome so I get lazy!

Try adding this to the <head> of the HTML file:

Let me know if this works.

Ok thanks I’ll try that but also like you I would have thought it was a browser issue. Do you get the same issue when you open the file in your browser? It happens for me also in IE. If your suggestion doesn’t work I’ll send you a screen shot so you can see better what I mean.

If the tag doesn’t work, please send a screenshot and the modified file.

Yes, that’s fixed it. Thank you.

I need to make the word Mahāvastu italics in the first sentence “Here begins the Mahāvastu.” I installed the MarkdownEditing package for Sublime Text (ST). The italics word for Mahāvastu in ST appears as _ Mahāvastu _ (without the spaces between the word and the underscores) which should appear italicised in the browser but does not (instead appears as _ Mahāvastu _). Just wondering if any ideas available to fix. (Note - I’ve enabled Markdown editing to the file in ST - indicated by the text in the file now appearing in ST grey on grey). 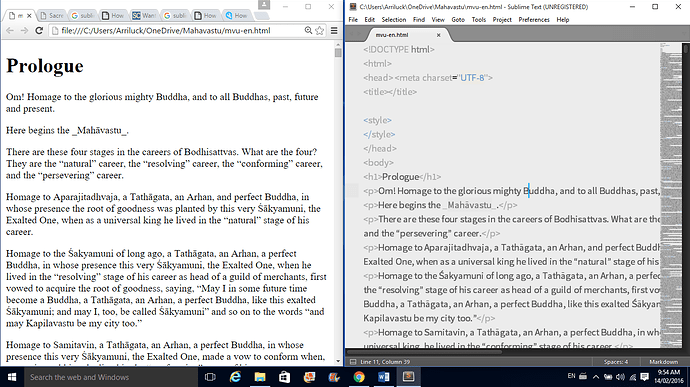 italicising with underscores is not an HTML standard, therefore browser cannot recognize it, the standard is <i>...</i>