PUZZLE: The quick fox jumped over the lazy dog

PUZZLE: What do the following have in common?

The quick brown fox jumps over the lazy sleeping dog.

The above two quotes have something in common. What could it be?

(…and as a side note to the curious, here is Ajahn Brahmali’s translation…)

pli-tv-kd6:34.7.3: She then sat down next to a pot of rice and a pot of curry and served a meal to the fourfold army. The food was not exhausted until she got up.

They both contain almost all the letters of their respective alphabets? The fox is usually brown to give you b, w, and n. But I guess the original doesn’t give you s either.

I have always seen it as “The quick brown fox jumps over the lazy dog” which gives you the s.

They both contain almost all the letters of their respective alphabets?

Yes indeed!
There are a few Pali segments that have this property and this is one of the shorter ones.

(and Oops. Thanks for the correction.

And it makes for quite the Pali tongue twister as well. I think I got all the Pali letters in there–let me know if I missed any.

So when I said “almost”, it wasn’t even almost.

This is a common mistake that people make when looking at the alphabet. The letters above are what is known as digraphs. Just like people decided to use an underdot to make the retroflex letters, they decided to use the letter h to indicate the aspirates. If you look at any Indic alphabet (as far as I know) the aspirated letters are completely, more or less, distinct from non-aspirated. 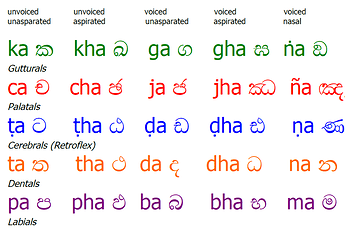 ḍa and ḍha are kind of similar, tho. But the rest aren’t.

So when I said “almost”, it wasn’t even almost.

Well, if we use “Unicode code points” instead of alphabet, then perhaps we can agree on completeness. I’m writing a program based on this and rely on code points rather than an actual alphabet.

I remember it as “The quick brown fox jumped over the lazy sleeping dog.”

Corrected. Thanks! Clearly my memory is like swiss cheese.

Exactly. Just take a look at a Pali alphabet chart (see my edit above) Although if you want to get really technical it’s an abugida

Well, if we use “Unicode code points” instead of alphabet

I mean, I guess you can set any parameters you like. But it would be more interesting to try and find an actual segment that fits your original rule.

Wait!? What!? I need to get the program correct. What am I missing?
I am relying on the following unicode characters:

What am I missing?

Sorry. I meant that you were trying to pull a fast one and change the parameters. I made an edit to try and make that more clear. I’m serious but joking.

Ahh. My penmanship class was almost five decades ago.

So much for mindfulness…

This phrase was used in penmanship class, so writing it a gazillion times may have helped ingrain it in my memory.

But it would be more interesting to try and find an actual segment that fits your original rule.

How about this monster?

My penmanship class was over five decades ago.

What am I missing?

Is it phonemes that you are after?

The nuns really worked us over.

Still no ḍh. You’re getting closer though.

EDIT: Spoke too soon. No th either, which is strange since it’s so common.

Is it phonemes that you are after?

Well, I want to feed Pali text to an AI so that I can compress Voice MP3 files. I just need the Pali characters used so that I can send them to the AI. For this purpose, “dh” can be treated as “d” followed by “h” since the AI considers adjacent letters.