Does anyone know where in the sutta it would be possible to read about use of mudras and the benefit of this ?

As far as I’m aware, there are no references in the Pali suttas to the use of mudras in meditative practice, or in some other kind of orthodox practice. Theravada basically treats meditative technique like farmers treat sacks of potatoes: Just get the lump of stuff in the right place and make sure it doesn’t fall over. Sometimes, though, there could be little instructions on where to put the hands. Ajahn Lee Dhammadharo recommends a “hand in hand facing up on the lap” posture in his meditation manual. There could be many others who do too, but my introduction to meditation was more of the “sack of potatoes” method. (“You seeet. You Meh-Dee-Tahte. I go now. OK.”) So if there are mudras in Theravada, they don’t have power in and of themselves, they are not a practice in and of themselves, and they are not highlighted by tradition.

In Zen, the Dhyani Mudra is recommended for zazen. In Tibetan practice, there can be a variety of different mudras used in the course of their liturgies or contemplative practices.

The only reference I’ve read on mudras in Theravada is in a book called Buddhist Rituals & Observances from Amaravati Publications. The second chapter describes mudras as a feature of Buddhist art (and therefore culture) as seen in Buddha statues. It goes into a bit of detail on them. More extensive treatments can definitely be found in Mahayana/Tibetan sources.

Thank you Dhammadharo. So it was not only me who could not find this i the theravada suttas

But as you say, there are buddha statues with different mudras. But maybe they are more of symbolic value.

buddha statues with different mudras. But maybe they are more of symbolic value.

Maybe the statues were influenced by Mahayana? 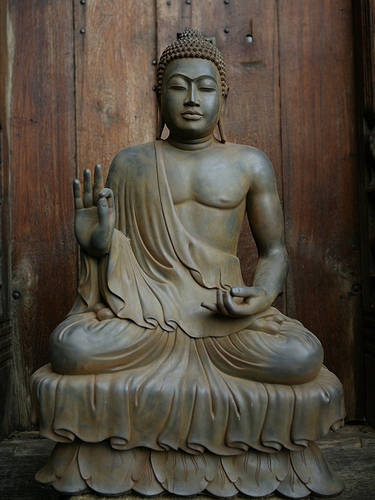 This is the kind of statue i talking about, if it is mahayana or not i do not know.

There is no reference of mudras in early suttas, but from the commentaries several mudras is mentioned indirectly. Eg. when the Bodhisatta was striving for enlightenment, Mara came to failed him with a large army. The Bodhisatta had no army, only depend on his paramis, and finally won the battle with calling for the great earth as his witness. Although not explicitly stated, this is the origins of bhūmisparśa mudra. And when the Buddha was meditating, he used dhyana mudra. When he was teaching for the first time after enlightenment, he used dharmacakra mudra. Of course, these mudras are not explicitly stated in the Pali texts.