I have been studying the Sutta with my friends and we have 2 questions which I hope you can assist:

How then does one break out of the loop? 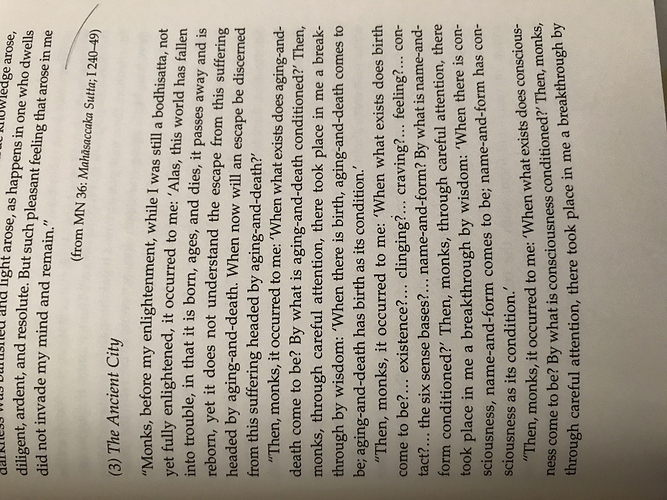 I will attempt an answer to the first question first. The Dhamma the Buddha discovered was so deep and understanding it requires a lot of wisdom and sacrifice. In short, one has to give up the so called “self” which every living being clings to with dear life in order to achieve liberation from suffering. It is the reason why the Buddha pondered whether to preach or not having seen which Bhrahma Sahampati intervened.

There is also another theory which says that The Buddha did everything on invitation. For example, he left heaven to be conceived in the mother’s womb on invitation. So he had to be invited to preach the Dhamma too. I do not know how far these theories are accurate.

On a personal not, these episodes could be mere later additions and those familiar with EBTs should be able to shed more light on these types of rather speculative issues.

With regard to the second question, I am not able to give a simple answer because it is IMO the core of dependent origination. From the question, I guess that you are just starting to get into deeper waters. Therefore, What I suggest is that you start off with DN.15.

The Nibbana sermons and dependent origination sermons by Ven: K. Nanananda at http://seeingthroughthenet.net/ could be very helpful in understanding this vortex like relationship between consciousness and name & form.

if Buddha is enlightened and compassionate, why did Buddha need Brahma Sahampati to request Buddha to teach before Buddha was willing to teach?

"I considered: ‘This Dhamma that I have attained is profound, hard to see and hard to understand, peaceful and sublime, unattainable by mere reasoning, subtle, to be experienced by the wise. But this generation delights in attachment, takes delight in attachment, rejoices in attachment. It is hard for such a generation to see this truth, namely, specific conditionality, dependent origination. And it is hard to see this truth, namely, the stilling of all formations, the relinquishing of all acquisitions, the destruction of craving, dispassion, cessation, Nibbāna. If I were to teach the Dhamma, others would not understand me, and that would be wearying and troublesome for me.’ Thereupon there came to me spontaneously these stanzas never heard before:

Considering thus, my mind inclined to inaction rather than to teaching the Dhamma.

“It was said: ‘With consciousness as condition there is mentality-materiality.’

How that is so, Ānanda, should be understood in this way: If consciousness were not to descend into the mother’s womb, would mentality-materiality take shape in the womb?”

“If, after descending into the womb, consciousness were to depart, would mentality-materiality be generated into this present state of being?”

“If the consciousness of a young boy or girl were to be cut off, would mentality-materiality grow up, develop, and reach maturity?”

“Therefore, Ānanda, this is the cause, source, origin, and condition for mentality-materiality, namely, consciousness.

“Therefore, Ānanda, this is the cause, source, origin, and condition for consciousness, namely, mentality-materiality.

Regarding the first question, I recently asked Ven. Analayo about the passage you cite (from MN 26), though it was more in regard to the phrase “wearying and troublesome for me.” He pointed out that this whole passage – with the Buddha inclining toward not teaching and Brahma Sahampati persuading him – does not appear in the Madhyama-āgama version.

He makes the case for it being a later addition to the sutta in this paper:

Regarding the second question, I’d agree with Nimal that it’s not a simple answer, as it’s necessary to have a clear understanding of the function of both nama and rupa and how they interact, as well as how consciousness interacts with nama-rupa. Nimal’s suggestion of Ven. Ñāṇananda’s work is an excellent one. You might also find this paper by Patrick Kearney to be helpful:

He makes the case for it being a later addition to the sutta in this paper:

I agree with Ven Analayo on this, though it wouldnt be entirely impossible that such a thought might arise, at some point.

How then does one break out of the loop?

Both come to an end when ignorance, which is at the root of the DO, is eradicated. Needless to say, it is a highly complex topic. Here the cycle fades, like a light going out.