R. Gombrich, A. Wynne stress that what the EBTs are is a big mystery. But where in writing?

R. Gombrich and A. Wynne have many times stressed in talks and lectures, that what the Pāli and other early Buddhist texts really are is a big mystery. Still far from being understood. But did they express that very thesis in writing somewhere?

The first page of Alex Wynne’s The Origin of Buddhist Meditation: 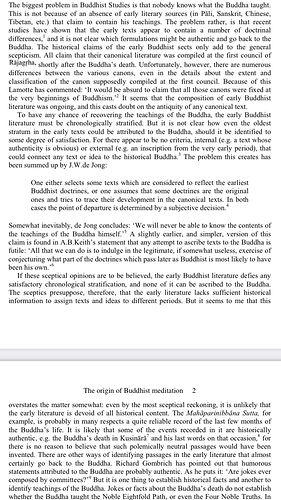 Academics coming from a western standpoint will never be able to understand that the suttas were not designed to present a complete system, but as a guide in which practice formed the core:

“While in a literate culture in which systematic thought is highly prized the lack of such a text with a unifying function might be viewed as a defect, in an entirely oral culture—as was the culture in which the Buddha lived and moved—the lack of a descriptive key to the Dhamma would hardly be considered significant. Within this culture neither teacher nor student aimed at conceptual completeness. The teacher did not intend to present a complete system of ideas; his pupils did not aspire to learn a complete system of ideas. The aim that united them in the process of learning—the process of transmission—was that of practical training, self-transformation, the realization of truth, and unshakable liberation of the mind.”—Bikkhu Bodhi

The first sentence from Alex Wynne’s extract seems so strange, because we do know what he taught: he taught a system of meditation.

The quote from Bhikkhu Bodhi is a great antidote, because Europeans and people from western Asia do need this antidote. We were brought up with the Bible or the Koran. These books traditionally directed our lives, and were often worth going to war over. I can remember when I first came to Buddhism, how confusing I found it that there was not a single definitive source book to consult.

Work that anthropologists are doing on extant non-Buddhist oral traditions are valuable in that they show the western Academy how such traditions work.

That Bodhi quote right here is so important. So many western scholars have a hard time with the EBTs because they can be so different than other literature. They then come up with all sorts of speculative theories about how there were conflicts in the early sangha between different views or about how certain ideas in the EBTs must have developed later from others, since, to them, they are contradictory (but really, they are not, but are complementary or parallel ideas).

Another issue they seem to have is with how so many terms have broader semantic fields than we are used to with modern philosophical or religious literature (such as nama-rupa etc). Instead of seeing these as just different ways of talking about the same thing, they think there is some mistake at work or some change in how the idea was understood. This leads to such ideas like “the Buddha didn’t teach the four noble truths” or “we don’t know anything about what he taught because there is so much contradiction in the early sources” and so on.