… had to make suttas referring to creator god …

So your basic assumption is, that the set of suttas has just been a tool-box of memes to create a religion?

The names was changed after. But actually there was only Indra in early Buddhism.

Actually It’s not exactly how I mentioned creator god because as Pali Society scholars say in time of Buddha there was not that concept. It’s probably after that the MahaBrahma was referred to creator. But I think there must have a early start of taking about a creator god. But it was not called Maha Brahma. In agama talks about if Jain leader was created by a supreme god. Then it must be a evil god. But if people say Buddha was created by a supreme god then they will say he was probably created by good supreme god.

Again, if all the pleasure and pain that beings experience is caused and created by a supreme god, then in the past the Nigaṇṭhas [must] have been created by an evil supreme god.

It’s hard to know how something started. Like Bhikkhu Bodhi comments on The Kalamas sutta of Agamas . Which have a different beginning. But which tradition did something to the text is hard to know.

So maybe it all started with this Agama sutta to talk about creator gods. But there is brahmas that enjoy creating also. So hard to know what they meant in suttas

Hey @Upasaka_Dhammasara,
I’m no moderator here but just wanted to give a heads-up as a long time user who appreciates seeing this forum fulfilling its purposes.

Your insistence and approach to this topic may not be 100% aligned with this space’s guidelines.

"(…) questions or suggestions, asked persistently, can be used as a way of trolling while escaping the ban. Experienced trolls will say things like, “I wonder if it could be true that …” “We can’t know for sure that …”.

If anyone persists in raising such issues in this kind of leading manner after being warned, they will be banned."

I strongly recommend you to have a look at those from time to time.

The best to do when you are so confident of a hypothesis is to pursue the proper ways to explore it, via academia and/or the pursuit an independent scholarship through a blog of yours.

It is not appropriate to use this public space as a medium for you to broadcast views which are clearly in disagreement with established scholarship, as patiently noted by Ven @Dhammanando.

Note that if you chose the path of independent scholarship you can take as reference and inspiration the works of many other people on the web.

By doing so this way your chances of getting the attention of someone in the academia willing and able to properly assess and validate your hypothesis would be even greater.

My bad. Maybe I was trying to reach my own tradition scholars. Maybe there is no where else on the web. But thanks for heads up.

Lets close off then. Cya

No problems. We are all united in seeking the Buddhas Dhamma

It is often frustrating that this forum can’t fulfill all needs or be all things for all people. Hence we have opted to focus on EBT’s and to do that one thing as well as we can, even though this does leave many worthwhile areas un-addressed.
Thank you for your kind understanding 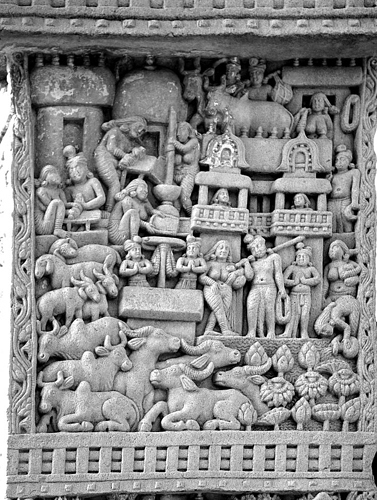 Visit of Indra and Brahmato the Buddha . The visit of [Indra] and [Brahma] to the Buddha takes place in the town of [Uruvilva].Near the center of the panel is the throne indicating the presence of the Buddha, surmounted by the umbrella; behind it, Indra and Brahma standing in an attitude of adoration; in the background, the houses of Uruvilva and the people at their daily tasks. To the left, a man and woman, the woman grinding spices on a “cari” stone; nearby, to the right, another woman is at work at a table, while a third is pounding rice with pestle and mortar, and a fourth winnowing the grain with a fan. In the foreground is the river Nairanjana, with cattle on its banks and a woman drawing water in a pitcher. One of the villagers has his hands joined in the attitude of prayer.

The Gods entreating Buddha to preach . The gods entreating the Buddha to preach. The Buddhist scriptures tell us that after his enlightenment the Buddha hesitated to make known the truth to the world. Then Brahma,Indra the four [Lokapalas](Regents of the Four Quarters) and the archangels of the heavens approached him and besought him to turn the Wheel of the Law. It was when the Buddha was seated beneath the banyan tree (nyagrodha) shortly after his enlightenment, that this entreaty was made, and it is a banyan tree with the throne beneath that is depicted in this relief. The four figures side by side in the foreground may be the four Lokapalas. 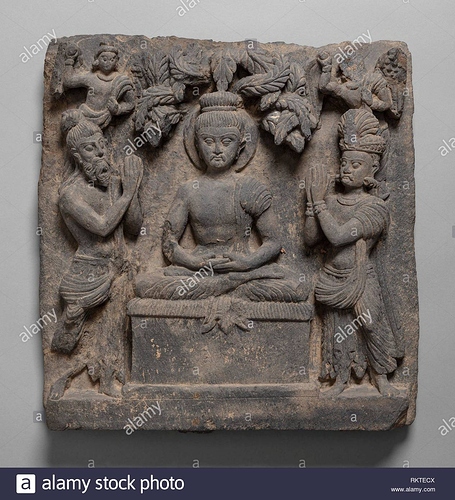 The images above have to be seen in the Buddhist context in which they were created, which is that Indra (Sakka) and Brahma are a deva and brahma respectively, and not able to attain enlightenment without the Buddha’s teaching and that’s why they are worshipping and imploring him to teach, which he often did to devas and brahmas.

“All beings — human, sub-human, devas, and brahmas — die. All except arahants are reborn in one or another of the thirty-one planes. No being lasts forever. Arahants have eradicated all mental defilements and have thereby eliminated the causes for rebirth with its attendant suffering. They are not reborn after death. Instead, they attain Parinibbana, the complete, permanent cessation of every form of existence. For all non-arahants, death is immediately followed by rebirth. The plane of birth is determined by the kamma that becomes operative at the moment of death. This could be any volition created in the present life or in any previous existence. Even the three lower kinds of noble ones ( ariya ) must be reborn. They have effaced some of the mental defilements, are assured of eventually attaining Nibbana, and will never again be reborn in the lower planes. Noble ones of the two lower kinds — stream-enterers and once-returners — can be reborn in the deva planes. For anyone who is not an ariya — and this includes most devas and brahmas — the destination of rebirth is uncertain. It may be on the same plane or on a higher one; but most often it is on a lower plane. Rebirth is neither arbitrary nor controlled by a God. It takes place strictly due to kamma, the deeds we have performed and continue to perform all our lives. Brahmas too die and are reborn, and also suffer, even though their lives are so extremely long that they may be deluded into believing they are permanent.”—Jootla

But the parallels most use only Brahma. If the two gods are together. So this a Pali name. Even the story of who Sahampati is has no parallel?

I am no Pali or sutta scholar, but I believe this understanding is based on the way in which the labels/names are used throughout the suttas. As such, it can be confusing because the same ‘word’ does not mean the same thing across traditions etc.

I will leave it to the scholars to elaborate further

But still these reliefs it’s the furthest we can reach in history and doesn’t prove what tradition was before Asoka. Or even during Asoka time. As most relief was made after Asoka time. No where do they write who those two gods are.

Ah the joys and frustrations of history

I’m afraid I can’t help in this - I am definitely not a scholar, but a practitioner

Here is a question , that I would ask from a practice perspective… 'what does it matter?
Just meant as some food for thought

Good luck on your quest 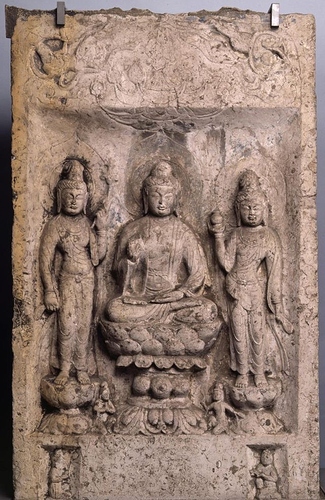 Please take a moment when you share these beautiful carvings to add the url where you added them. Some of them are so beautiful that I would like to investigate them further.

(And as I reminded you yesterday, this is forum policy.

Here are the links to the first two images which are from Sanchi, and are aniconic meaning the Buddha is not depicted, only suggested by the presence of an umbrella. 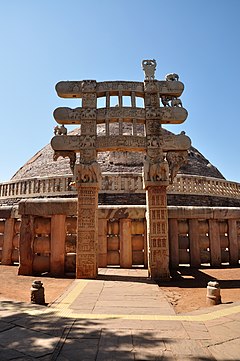 I have an archaeological contact at Sanchi so if anybody is going there or taking a group there, they could contact me.

I did add link for those two.

I searched many art work in all India. All of them even before christ is indicating that they come from mostly from MADHYAMA agama. But I don’t find the parallel. I found another artwork similar where Buddha is shown as a monkey. But I think it was something in front gotama Buddha. Because the earliest form his high chair is empty. And the agama say it happened to Buddha. As a marvelous thing. For example I found the story art that is told before and after.

Then that monkey retreated to one side, took a piece of stick, and removed some insects [from the honey in the bowl]. Having removed the insects, the monkey again offered [the bowl] to the Buddha. Again the Buddha did not accept it. The monkey again retreated to one side, added some water to the honey, and returned to offer it to the Buddha again. The World-honored One readily accepted it. Seeing that the Buddha had accepted the bowl of honey, the monkey was overjoyed. Dancing and whirling around, it departed.

That sutta I noticed is the opposite or parallel to Acchariya abbūta sutta. In which some part is like talking the opposite of the agama. It said two water appeared to water the bodhicatta and the mother while agama say it was to water Buddha. 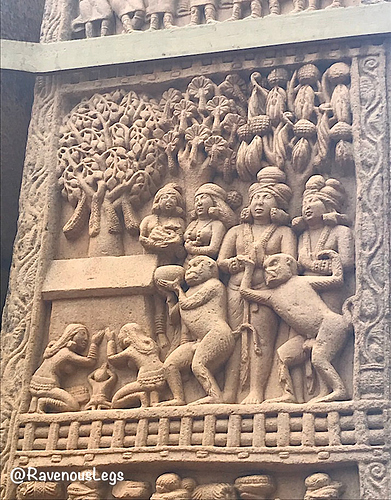 Found in notes of: