So while this sutra is considered a “Mahayana” text it actually contains a lot of early material.

While the Śālistamba does not survive fully in Sanskrit, it is the most widely quoted sutra in Mahayana texts on the topic of pratityasamutpada and thus about 90 percent of the material survives as various quotations in other Buddhist Sanskrit works. Therefore, the Sanskrit has been reconstructed by modern scholars (beginning with the work of Louis de La Vallée-Poussin, 1913). Many passages in this sutra have close parallels in the Pali suttas (especially the Mahatanha-sahkhaya Sutta, M1:256-71)

The Śālistamba Sūtra shows that its proto-Mahayana transmitters (possibly the Mahāsāṃghikas) knew and accepted a theory of dependent origination which is almost identical with that of the Pali canon.[10] It also shows a intent to consolidate and systematize material that is found throughout the Pali Canon with a few new, albeit conservative innovations.[11] For example, it applies a simile of seed and plants to the doctrine of dependent origination, something which is not found in the Pali canon.

N. Ross Reat notes that this indicates that the early Mahayana tendency was not “self-consciously schismatic” but was simply one of the many attempts to systematize and elaborate on the Buddha’s teachings. While some schools chose to incorporate these systematizations into Abhidharma texts, the proto-Mahayana chose to incorporate them into sutras.

The Śālistamba Sūtra (rice stalk or rice sapling sūtra) is an early Buddhist text that shows a few unique features which indicate a turn to the early Mahayana. It thus has been considered as one of the first Mahayana sutras. According to N. Ross Reat, the sutra could date as far back as 200 BCE. It is possible that this sutra represents a period of Buddhist literature before the Mahayana had diverged significantly from the doctrine of the Early Buddhist schools. Three commentaries on the sutra tr...

I was just wondering, why not include this sutra as part of the material in sutta central? It is widely attested in North Indian literature and widely quoted and seems to have many parallel passages with the Pali suttas.

I guess this is one of those “edge” cases though and I can see why some would not want to include it because it is also a later “sectarian” text. But since we already have a section for Abhidharma, I really cannot see why there cannot be a section of the site for “proto-Mahayana” sutras which contain large portions of early material embedded within it. Thoughts?

Here’s the link to the work by Ross Reat 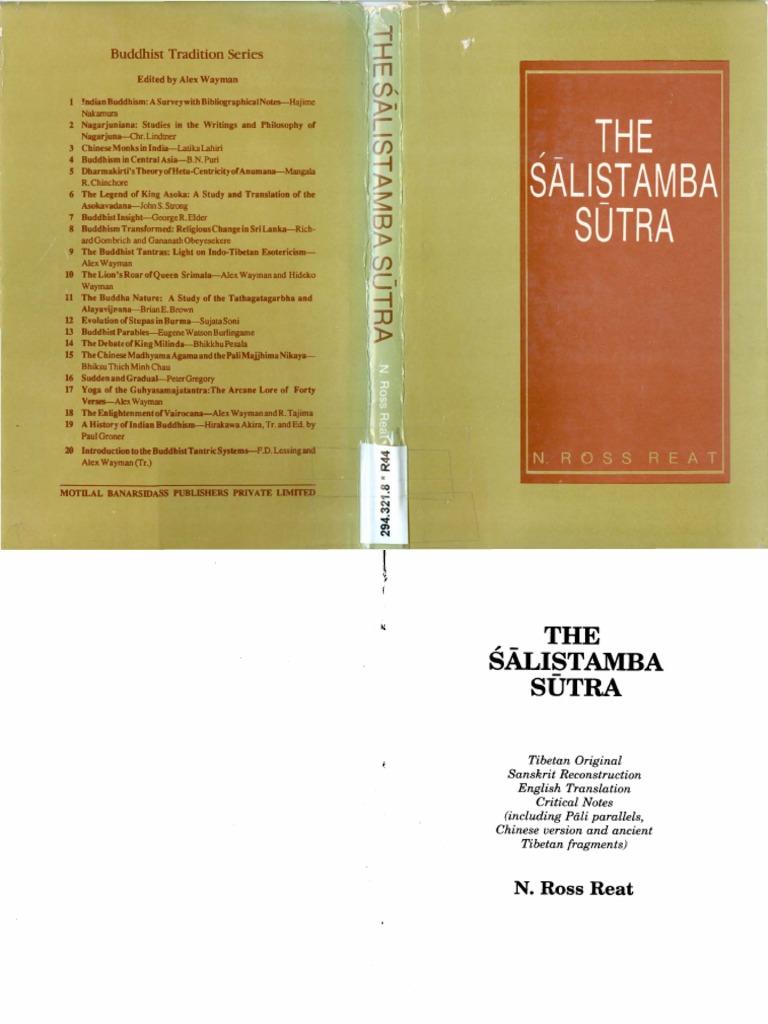 Good idea. We do include a number of such quasi-early material, especially in the Sanskrit segment, for example the Mahavastu, the Divyavadana, and so on. We even find space for some chapters from the Yogacarabhumi.

The general rule is that we are more apt to include such material from Sanskritic sources than Chinese or Tibetan. The reason is purely pragmatic: since there is so little early material in Sanskrit, it is sometimes very useful to have a Sanskrit source, even if it is just a quoted line or verse.

In this case, the Sanskrit portion is on Gretil here:

So it’s not hard to adapt for SC. Identifying parallels is not easy, though. Just scanning through the text, it seems that most of it is an Abhidhamma-style discussion about DO, and not direct parallels. It refers to the DO formula in an abbreviated way:

One phrase appears to be a parallel of MN28#26

Checking Reat’s book, I see that he includes a list of parallels at the end of the introduction. So this would be a nice addition. Given how busy our team is right now, I don’t see this coming any time soon, but thanks for the tip, and hopefully we can add it at some point.

Cool, glad to be of help.

This definitely makes me think then, what are the rules for which texts get included or not? Sutta central is geared towards Early Buddhist texts, a somewhat fuzzy concept. Would a text that includes 50 percent EBT style material make the cut? 25 %? Or would the idea be to just include excerpts of that material from the larger Mahayana works which include early material in it - like the Prajnaparamita in 8000 (apparently some early versions of this text in Chinese don’t even use the term “Mahayana”.)

It seems like, If Abhidharma works are going to get included because they are based on early matrkas (as per Frauwallner) then early Mahayana texts which have EBT influences might also be included for the same reason.

Of course I am not as knowledgeable about “proto Mahayana works” and how they are related to EBT material so that would take some research. But if anyone else knows of any others like the Salistamba I’d love to hear about it.

IMO the more diverse sources we have the stronger the case for EBTs being authentic becomes.

There’s no hard and fast rules, but generally speaking we try to be inclusive.

We do include some long Sanskrit texts such as Divyavadana and Lalitavistara, which are primarily later, but contain small passages of EBT material.

Sectarian affiliation is not a consideration. For example, the Prajnaparamita contains substantial passages parallel to the Satipatthana Suttas, so that could be included. For example:

In fact, looking closer at this whole passage, it contains a long list of EBT teachings, and it seems to share a lot in common with the Arthaviniscaya.

So that’s nice, and useful too. But we’re not experts in this material, so how to approach it? We could do it by just publishing excerpts. But then, what if we later make an additional identification, we have to add another excerpt. It’s not that much harder to do the whole text. But where do we get parallels from? I’d guess someone has made such a list, so we’d have to source it and make it work in our system. My guess, it’d be about a week’s work, maybe a month, for Vimala or myself.

The problem is that once you start including “early material in late texts” it’s a long road. What about all the commentaries and sastras? Nagarjuna quotes from Agamas: do we include him?

Preparing complex texts in Chinese or Tibetan is a demanding task. In terms of adding major new texts, my first priority would be the Mulasarvastivada Vinaya, in both Chinese and Tibetan, which contains hundreds of parallels with EBT material, both Sutta and Vinaya. But for this we are waiting on the publication of studies in Japanese, which are identifying parallels and clarifying the structure.

Yea, its definitely a long haul, there is just so much material. I guess this just means that suttacentral will continue to be a work in progress for some time!

With regards to shastras, the one that immediately comes to mind is Śamathadeva’s Abhidharmakośopāyikā-ṭīkā which includes many Agama quotations and these are currently being worked on by Bhikkuni Dhammadina.

Yes, we’re in touch with Ayya Dhammadinna, and we will add her work when it is complete. This and the Mula-sarv Vinaya are two really important outstanding works. In addition, we can add many more verse parallels, especially from Sanskritic texts.

I have just recieved Vol. 7 of the Gandhari Buddhist Texts series. You know. The Mahayana one. With Nattier’s Ugraparipṛcchā years ago I became aware that many of the so called Mahayana texts between 100 BCE and 300 CE may have emerged from monks living and practicing in mainstream monestaries… as part of an internal special interest groups who may have diverged very little doctrinally or in self image from the larger group.

These multi mini mahayanas also can be seen as just Buddhism streatching in different directions. I have often read the words “there is little here that couldn’t be found in the Nikayas”. Is there a literature here, or just an era?