Same pericope of supernormal powers in Pali and Chinese?

In Pali we have the following pericope with supernatural powers:

How is this represented in the Chinese texts:

In Analayo’s works I could only find the following reference which doesn’t answer the questions above:

The Sāmaññaphala-sutta and the Saṅghabhedavastu also indicate that the ability to reach Brahmā Heaven is performed by “exercising control with the body”, in relation to which the discourse preserved in Chinese translation offers the information that this takes place by “transforming the body”. (Levitation in Early Buddhist Discourse, p.15)

Although I can’t answer the more/less often question, I looked up the MN suttas you listed in Ven. Anālayo’s “A Comparative Study of the Majjhima-nikāya”, where he usually has tables comparing differences like these. It was all over the place – sometimes the parallel versions contained supernormal powers, but not all of them, or in a different order, or sometimes didn’t contain them at all. Sometimes the MĀ version had them, but the EĀ version didn’t. I got the sense that the list of supernormal powers is much less standardized in the Chinese texts compared to the Pāli.

Public Service Anouncement: Pericope does not rhyme with periscope. It’s pəˈrɪkəpiː
Historically it doesn’t really mean stock passage, but rather a clip from scripture that has it’s own meaning. But I notice people starting to use it to mean stock passage. I guess that’s more fancy.

A pericope (/pəˈrɪkəpiː/; Greek περικοπή, "a cutting-out") in rhetoric is a set of verses that forms one coherent unit or thought, suitable for public reading from a text, now usually of sacred scripture. Its importance is mainly felt in, but not limited to, narrative portions of Sacred Scripture (as well as poetic sections). Manuscripts—often illuminated—called pericopes, are normally evangeliaries, that is, abbreviated Gospel Books only containing the sections of the Gospels required for the M...

Any way, back to the conversation. It’s a good question.

sometimes the parallel versions contained supernormal powers, but not all of them, or in a different order

But is it detailed - appearing - walking through walls - walking on water - touching the sun… etc? What I saw was the supernormal powers in general. Maybe I’m wrong, could you give a page number?

With his concentrated mind that is pure, without blemish,
pliant, disciplined, established in the stage of imperturbability,
and mentally unified, he cultivates the realization of supernormal
ability. He is able to perform various transformations, transforming
his single body into innumerable bodies, as well as
joining the innumerable bodies back into a single one. With
his body he is able to fly, without being impeded by stone
walls, and he moves through space like a bird. He steps on
water as if it were earth. From his body smoke and flames
emerge as if it were a great heap of fire. With his hands he
touches the sun and the moon. He straightaway reaches the
Brahmā Heaven.

Great, thanks!
If some Chinese specialists could help with the frequency, that would be sweet.

Searching for the Chinese term for flying, since that’s part of the passage, I was able to locate four instances of the pericope, almost exactly the same wording. It’s in the Dirgha three times and the Ekottarika one time.

I didn’t try to scan all of the alternates, just the four major collections. The Dirgha wasn’t a surprise since it descends from the same ancestor as the Pali canon. The Madhyama didn’t have it at all, which is Sarvastivada.

I didn’t really see any variations, but I was a little amazed at just how much flying around was happening (sometimes it was insects or birds, but there were quite a few flying people).

It’s in the Dirgha three times and the Ekottarika one time.

Outstanding, thanks!
Is the conclusion correct then that in comparison to the 30+ occurrences of the suparpower-passage in the Pali suttas the Chinese sutras have them relatively rarely?

Outstanding, thanks!
Is the conclusion correct then that in comparison to the 30+ occurrences of the suparpower-passage in the Pali suttas the Chinese sutras have them relatively rarely?

The full definition seems to have been more rare, at least the one that involves flying, touching the sun and moon, etc. I’ve seen it in exegesis, though, so it wasn’t unknown. Perhaps the Sarvastivada had it in other parts of their canon.

Which made me wonder if its in their Abdhidharma and, yes, it is. The Dharmaskandha-pada has the pericope at T1537.475c07 in a definition of the four iddhis, though I don’t see it in the Mahavibhasa (edit: it’s referenced once but it was abbreviated).

According to Choong Mun-keat’s The fundamental Teachings of Early Buddhism p. 224:

Although the counterpart SA discourses are missing, the term corresponding to cattāro iddhipādā,
namely si ruyizu (四如意足), can be found elsewhere in SA, 55 and an
explanation similar to the one quoted above from SN is also found
elsewhere in SA. 56

The full definition seems to have been more rare,

That’s tough to answer without looking at each text and seeing if there are any patterns. Something different could be inserted where the Pali has this pericope, or the passages may not read the same. It may be the Pali tradition emphasized these powers more while the other Agamas didn’t consider it so important. It doesn’t help that we have multiple traditions represented in the Chinese, so it may be a matter of chance that the Agamas that had the pericope didn’t get translated.

It’s also possible some abbreviated occurrences have slipped through my search. In the Mahavibhasa, the passage was reduced to “Having been one and become many … and reaches to the Brahma world,” so searching for flying didn’t catch it.

Although the counterpart SA discourses are missing, the term corresponding to cattāro iddhipādā,
namely si ruyizu (四如意足), can be found elsewhere in SA,

These look to be the four psychic powers from the 37 factors of awakening.

It’s interesting to make sense of these things, even though of course we don’t get to definite conclusions. In the case of the Pali texts we find a relatively high number of precise copies of the same passage in all four Nikayas.

Now, how high is the probability that all these different bhanaka-transmitters transmitted such a long passage with virtually no variation? I would say it’s very low - especially when we look at other wide-spread formulas which usually show variation even though they are shorter.

My conclusion would be for the Pali suttas that there was a stronger editorial intervention at the time of the fixation of the collections to eliminate the differences and make the passage uniform. A text collection with less ‘post-production’ would show more fragments, variations etc. - maybe the Chinese collection(s)?

A way to contradict this thesis would be early manuscripts (ideally multiple, from multiple Nikayas) which would still have the exact same passage. Then there would be little other possibility than to interpret the passage to be extremely old.

I can check briefly check the Gandhari literature I have…

Other than this aspect there are of course other implications of number of occurrence, variation and distribution.

[Edit: At least in Salomon’s ‘The Buddhist Literature of Ancient Gandhara’ some texts mention the notion of supernatural powers, but there is no detailing of it]

I didn’t really see any variations, but I was a little amazed at just how much flying around was happening (sometimes it was insects or birds, but there were quite a few flying people).

Though it dates from a much later time, there’s a curious anecdote in the first volume of Samuel Beal’s Chinese Accounts of India, translated from the Chinese of Hiuen Tsiang, in which the flying religious people are reported to have been non-Buddhists.

At a considerable distance from the hill there are villages, but all of them are inhabited by heretics. They know nothing of the law of Buddha, or śramanas, or brāhmaṇas, or of any of the different schools of learning. The men of that country continually see persons come flying to the temple. On a certain occasion there were some Buddhist pilgrims from different countries who came here to pay religious worship. Then the men of the villages above alluded to asked them, saying, “Why do you not fly? All the religious persons hereabouts that we see are able to fly.”

These men then answered by way of excuse, “Because our wings are not yet perfectly formed.” 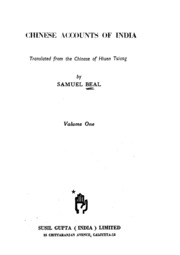 Though I’ve long been aware of this convention, nevetheless I shall continue to doggedly defy it and pronounce ‘pericope’ as [ˈperəˌkoːp].

After all, when the French can get away with [peʁikɔp] and the Germans with [peʁiˈkoːpə] (each of which rhymes with how they pronounce ‘periscope’) why must English speakers slavishly follow the Greeks and demur at naturalising the loanword?