Should Buddhist monks read a passage from Sutta Pitaka when attending to funeral blessings?

Should Buddhist monks read a passage from Sutta Pitaka when attending to funeral blessings?

When I attend to Christian wedding and funerals, the priest read a passage from the bible along with the crowed.
I think this is a great idea if Buddhist monks adopt a similar approach.
What is missing in Buddhist community is the lack of knowledge in Sutta.
This could be a great way to introduce people to start Sutta reading.
Generally monks give Dhamma talk with reference to Sutta but there is no active participation.
What is your opinion on this?

Personally, I’d prefer lay people not to ask monks to attend funerals and give blessings…

Personally, I’d prefer lay people not to ask monks to attend funerals and give blessings…

I think monks have to see that as an opportunity to teach Dhamma to lay people.
The monks play a two role here. A counselor and a teacher.

If it is in Pali, and from a sutta with parallel, I would see no problem.
Let’s not forget that an intentionally badly translated sutta, falls into the corrupted Dhamma case, as in AN 8.51.
It can even be unintentional.

Anyway, I see nowhere in the EBTs that monks should be involved institutionally and “religiously” in wedding or burial ceremonies.

Another strange addendum, for whatever intention there might be behind that.

In France, where I live, I went lately to a Catholic burial.
It is a usual practice to come in rank to the casket, have a thought for the defunct, touch the casket, and move on.
Now, they put a little money basket next to the casket.
It’s in the liturgy now.
Some would call that “parasitic behavior” based on human’s ignorance. But I would call that a tendency by all creatures of the kama loka, to appropriate and cling, through true ignorance.

Wasn’t Christ saying “just a robe and a pair of sandals” (the additional stick beeing still a quite important matter of argumentative theosophical matter, it seems).

Note that, not being aware of the practice, I took 20 euros from the money basket; which I conscientiousouly threw in the tomb later on.
Would the lady had been cremated, that I would have conscientiousouly thrown them, the same way, in the oven.
I didn’t know at the time that it was for Francois’ Berluti. I just guessed I had to do that in the ECTs (Early Christian Texts) spirit.
You know. When Christ goes on the mountain with Satan (Mara) , and refuses to take the world, the latter is offering him. The kama loka.

This is what happens when you don’t match the Teaching with the liturgy anymore. Or simply when you corrupt the Teaching.

Not only the Catholics do that.
Jesse Duplantis does it too.
“Televangelist says he’s not asking followers to buy him $54M private jet — he just wants them to ‘believe’”. (fox news). 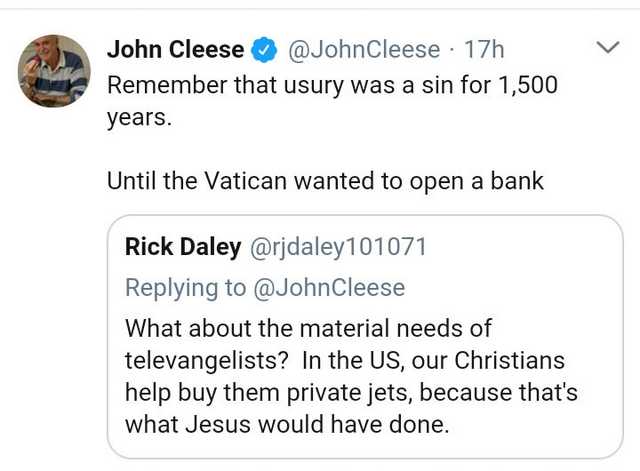 As Hegel used to say, in his critics of the Enlightenment (in his phenomenology of mind), Religion is the biggest of all businesses.

Anyway, I see nowhere in the EBTs that monks should be involved institutionally and “religiously” in wedding or burial ceremonies.

We are already doing it so we better make some value out of that.
Perhaps this is another good question for the forum.
You or a moderator can crate a new thread.

If it is in Pali, and from a sutta with parallel, I would see no problem.

Not many people understand Pali.
So it is better be in understandable language.
I hope that the monk will read it to make sure the translation is accurate.