It’s a Buddha temptation wall painting with the Maras etc around him nude.

Here is the explanation of rumor by Tibetan concerning a photo similar. 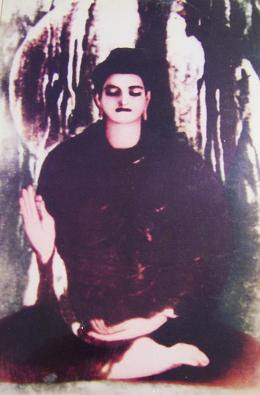 Is This a Photograph of the Buddha?

Hey @Upasaka_Dhammasara have you ever considered creating a personal blog? Some of your posts here would fit really well that sort of media/platform…

This is good content for the watercooler, please keep posting! I believe Gabriel was not suggesting you shouldn’t post here, but rather that your content would benefit from a more focussed home.

But back to the topic at hand: This is really interesting, I didn’t know the origin of this image. The cropped image was very widely circulated among the forest monks, and can be seen on the shrines of many of the forest monasteries.

A lot of people say this is a genuine photo of the Buddha, mysteriously revealed on film due to some mystical energies. This belief is not too different from the common claims of images of ghosts and the like in early photography, or even the rampant and rather crass belief that light artifacts on digital images were gods.

The image has a rather haunting beauty, combining an almost photo-realistic modelling of the face with subtle acknowledgments of the supramundane aspects of the Buddha image, like the ears, the topnot, or the long fingers.

The effect of the image is quite different in the original, once you see the whole thing as a decent resolution. It is less mysterious; but then, the circumstances have their own mystery.

The site to which you link has a nice range of interesting images. But on this image, it doesn’t seem to be accurate, or at least, doesn’t tell the full story. A little googling reveals that the image is in fact a painting by the Spanish artist Eduardo Chicharro Agüera called The Temptation of Buddha. It’s a well-known work, and was estimated by Sotheby’s at $40–60,000 USD.

With a few caveats (the Buddha wore robes, not a “red blanket”!), the description from Sotheby’s is worth reading.

Painted between 1916 and 1921, The Temptation of Buddha is undoubtedly Spanish Realist Edurado Chicharro y Agüera’s best-known and most celebrated painting. Now hanging at the Real Academia de Bellas Artes de San Fernando, Madrid, the painting, gargantuan in size (114 by 144 in.; 290 by 366 cm), won the artist the highest medal of honor at the Exposición Nacional de Bellas Artes in 1922.

The Temptation of Buddha illustrates a passage in the biography of Siddhartha Gautama (Buddha), a story that has evolved over time and was compiled in an epic poem written by Ashvaghosha in the 2nd century. As envisioned by Chicharro, on the night that he achieves enlightenment, Gautama sits upright while meditating under a fig tree, later known as the Bodhi tree. His body is covered by a red blanket that exposes his hands in the vitarka mudra position, symbolizing the transmission of knowledge, and bare feet, as a symbol of poverty and charity. His sacred calm persists in the face of the daughters of Mara, charged with impersonating the temptations of earthly life. On the left side of the composition, desire is represented by the furtive embrace of two women, lust by the figure who is half panther, hiding beneath her is laziness , and to the far right, bowing to the him, are twin images of flattery

The Temptation of Buddha relates to Chicharro’s inventive pastiche of Hindu-inspired and Thai decorative elements, conjuring an exoticist fever dream that enticed and captivated his contemporaries and continues to do so today. Dated 1925, the association between the present work and Chicarro’s own has yet to be determined, an indistinct inscription suggests another hand, the artist’s biography still unknown.

The actual image is maybe too racy to post here directly, I don’t know. But the whole thing seems like a fascinating story, of which we can only glimpse a few pieces.

At the time the painting was made, Buddhism and related exotica were very fashionable in Europe, and the story of the Buddha’s temptation by Mara’s daughters was well-known. It is obviously a tempting subject for a painter: you can while away the hours painting nude women while simultaneously doing something spiritual! There is, of course, a long tradition of sensual representations of this and similar scenes in Thailand and other Buddhist cultures, but rarely of such obvious lustiness.

There is a long history of interflow between western and eastern visions of the Buddha, and indeed, among the very earliest images a Greek influence is found. Perhaps the very un-Thai-ness of the image made it seem more human, in a culture where formal, stylized images are pervasive. Somehow there was something in the artist’s hand and intent that captured a humanity that caught the imagination.

Blurry and fuzzy are all our images of the historical Buddha. Culturally formalized images serve a certain purpose; they unite a people around a set of perceptions: “We are Thai Buddhists, this is a Thai Buddha”. Their meaning is on the surface.

It’s not just that Chicharro’s image was different; Thai people are well aware of different styles of Buddha. It’s that it was at once realistic enough, beautiful enough, and blurry enough that it evoked and allowed itself to be read as real.

Over the same period, Thailand was becoming a democracy, growing a technical economy, and learning the scientific method. Meanwhile, starting with Mongkut and continuing with Buddhadasa, scholars claimed to peel back layers of tradition to find the real teaching. The meditation tradition founded by Ajahn Mun claimed to go even closer, discovering the meditation techniques that lead to the same realizations as the Buddha and his arahants. Some in that tradition even claimed to have visions of the historical Buddha, to actually see by psychic means the Buddha’s physical form.

There is a yearning, a longing to experience the reality of the Buddha in some way. Few, if any, can develop such psychic abilities, so this image emerged as a concrete example. Excising the women, removing the sensuality and tension, draining the colors, fuzzing the outlines, reducing the detail: all these were required to make it just possible to see the image as a glimpse of an earlier, more authentic, more spiritual time. Part of the realism, I think, is how the Buddha’s background appears as a jungle, rather than the more civilized Bodhi trees of convention.

Thailand is a modern country. In modernity, much is lost. I learned this from Tolkien, who likewise yearned for a mythic past, finding a creative story to tell among the broken ruins of Nordic mythology.

At the end of the day, it’s only a painting, and perhaps that is something less. My friend the musical genius Ross Bolleter once told me a story of a tune he had caught a few bars of once. It had a unique and beguiling rhythm, like nothing he’d ever heard before. He couldn’t identify it, but hunted it down. When he heard the full thing for the first time, he was so disappointed. It was just okay. The unique rhythm was an illusion; he had merely misheard it, starting from the wrong place in the bar. But that doesn’t mean it wasn’t real, for it existed in his imagination.

I think it’s important to respect this process. We can read this story as: “a mysterious image believed to be a genuine photo of the Buddha turns out to be nothing more than a garbled Spanish painting”. Or we could read it as: “a European painting was transformed by the Thai imagination into a glimpse of the historical Buddha.” Both are true, yet neither is the whole truth.

Wow. I was searching in google after different ways but nothing came out. Thanks.

And my apology for misunderstanding @Gabriel_L

Before Bhante replied I came back to realize my fault. I was reading what I wrote. I’m like what am I saying

Wait Bhante the link you shared doesn’t seem the Thai version. The one I have Buddha is wearing a black robe. The painting in the link seems new . I’m confused. You mean that’s the original probably and then was done by another artist In Thailand? @sujato

Because look at mine. It’s in color. 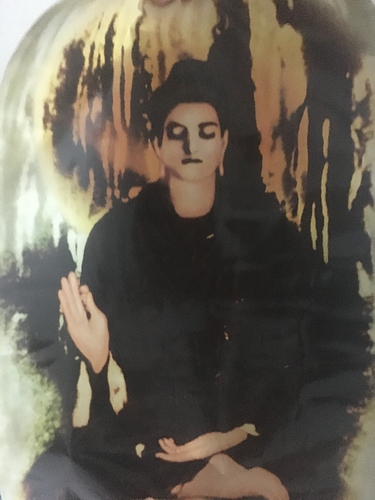 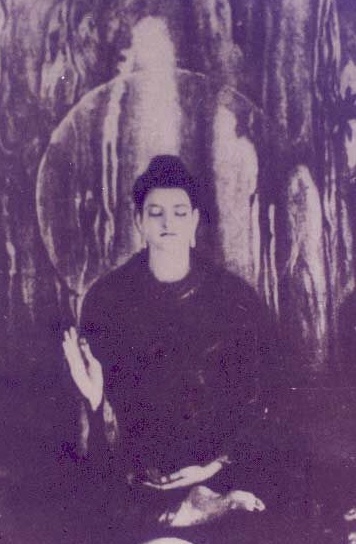 Comparing. So what’s the difference. One seems more artful then the other.

I believe Gabriel was not suggesting you shouldn’t post here, but rather that your content would benefit from a more focussed home.

Indeed. That was the idea.

Yes, that may be more dynamic.

that’s the original probably and then was done by another artist In Thailand?

It’s possible, but I doubt it; or at least, I haven’t seen any evidence for that. Most likely the image has simply degraded with many printings and copyings. I’d guess that maybe there was a news article about the original painting in a Thai newspaper of the era? Or something like that? Then the image was copied and recopied, perhaps sharpened or altered, sometimes colored.

I did compare the two images closely and I couldn’t see any differences that couldn’t be explained by simple image degredation. The perspectives and so on all look identical.

I think the tree is more detailed in the one I posted that’s the typical of Bodhi trees. But the Spanish artist seemed to have copy, he probably had a photo and did it almost the same. Artists can do that. Look at the halo around the head for example one is more detailed. The tree of the Spanish one is not detailed at all. Seems fake.