Some time ago, someone mentioned a sutta along the lines of; the Buddha to be summoning a Deva to assist when he was striving for enlightenment.

Try as I might, I can’t find the thread where it was mentioned, nor which sutta it might have been.

Anyone have any ideas?

Then it occurred to me, ‘Why don’t I practice completely cutting off food?’

But deities came to me and said, ‘Good sir, don’t practice totally cutting off food. If you do, we’ll infuse divine nectar into your pores and you will live on that.’

Then it occurred to me, ‘If I claim to be completely fasting while these deities are infusing divine nectar in my pores, that would be a lie on my part.’ So I dismissed those deities, saying, ‘There’s no need.’

Thanks so much @faujidoc1! Unfortunately that isn’t it.

I’ll read through the rest of that sutta, to see if it was there.

Originally it came up in a thread, in the context of practicing alone and ‘manifesting’ a being/external ‘entity’ to help discuss/get deeper, into seeing things as they are, dispel delusion, etc. ie ‘create’ a wise kalyanamitta, when none are available

Someone replied that the Buddha had done something similar calling up or manifesting a Deva for this kind of role, and gave a sutta reference. From memory, i thought it was during his quest for Awakening…

Thanks for you help. Much appreciated

I dont think this happened in his final birth if it happened at all. That’s the whole point of being a sammasambuddha. There is the event of the Bodhisatta calling the earth goddess to witness for his generosity while he was talking to Mara under the bodhi tree.

There is also the devata samyutta in the SN, but none of these involve the Buddha. And the devas come uncalled.

2 posts were split to a new topic: New thread regarding Long Fasting

Thanks everyone for your replies

I may have used the term ‘Deva’ a bit loosely, it may have been any being from a higher realm, Brahmas, gods etc not just specifically a Deva.

Can you refine it any more than that? Was it spiritual help he was needing or material? Are you positive it was in his final birth?

As I said previously, this just doesn’t have the “sound” of anything that would be in the suttas.

etc. ie ‘create’ a wise kalyanamitta, when none are available

The standard advice when there is no suitable companion is that one should “walk alone”. Conjuring up a kalyanamitta just doesn’t sound like Theravada Buddhism. Could it have been a Mahayana story?

It sounds as though it could be a jataka story.

Thank you @Snowbird and @Gillian

And if ever I find the source of this memory, I’ll be sure to post

someone mentioned a sutta along the lines of; the Buddha to be summoning a Deva to assist when he was striving for enlightenment.

A while ago, I mentioned this sutta where a monk tries unsuccessfully to recruit a deva into helping him out: is this what you were thinking of?

What a curious sutta! I’m not really sure what to make of it.

Then it occurred to me, ‘If I claim to be completely fasting while these deities are infusing divine nectar in my pores, that would be a lie on my part.’ So I dismissed those deities, saying, ‘There’s no need.’

IMO this is a reference to an idea similar to ichor, the divine shining blood that runs through the veins of the gods in Greco-Roman myth. They get ichor in their body from golden apples from a tree of life that contains deathless nectar, much like amṛta.

I doubt you were looking for this @Viveka but since it involves the period of Buddha’s austerities, I thought of sharing : 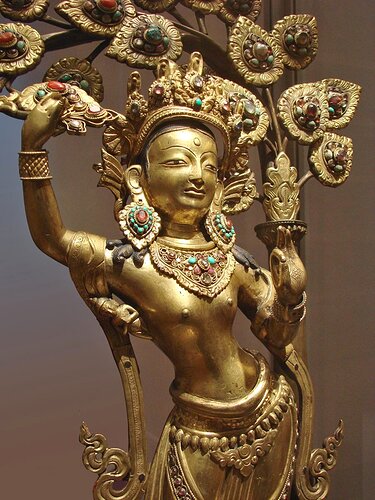 How obscure stories about Maya can help us untangle the misogynistic knots from Buddhism’s past.

Maya’s Anguish as Her Son Nears Death
The first story takes place during the period of Gautama’s fierce austerities, when he finally becomes so emaciated and weak that he collapses from exhaustion. Alarmed, celestial messengers make haste to inform Maya (as a goddess abiding in heaven) that her beloved son is dying.
Hearing the terrible news that her son is near death, Maya leaves immediately for the banks of the Nairanjana River, where she finds him cadaverous and unconscious on the ground. Choking with tears, she lovingly sings to him,
When I gave birth to you, my son, in the Lumbini Grove,
Without support, like a lion, you took seven steps on your own,
You gazed in the four directions and said these beautiful words:
“This is my last birth.” Those words will now never come to pass.
. . .
To whom can I turn to about my son?
To whom shall I cry out in my pain?
Who will give life back to my only son,
Who is barely alive?
Gautama awakes from his stupor, confused, and asks who she is. Again she sings to him,
It is I your mother, O son,
Who for 10 months
Carried you in my womb like a diamond.
It is I who now cry out in despair.
Gautama now consoles his mother, assuring her that the prophecies surrounding his superior destiny would definitely come to pass. She should not despair, he says, but rejoice because soon her son will become a fully awakened Buddha. Reassured by his response, Maya circumambulates him three times sprinkling him with flower petals and returns to her heavenly abode. [Lalitavistara, chap. 17]

Interesting. Did she get gender-flipped in the translation or does the Lalitavistara have her living as a female devi? She is a male deva in her subsequent life in the Pāli tradition AFAIK.