Please send the number of books and the names of the centers or book shops you intend to distribute to, If you like to have the books shipped to the center directly please send the address. Best email is suttacentraldevelopmenttrust@gmail.com
Looking forward to hear from you.

Following up again as the previous correspondence did not bear any result or clear out come. I am very keen on distributing the books.

Have you been in touch with @Deepika?

Just to let you know that I received 52 books -Verses of the Senior Monks and I will distribute them as soon as possible.
Thanks
With Metta

Sadhu! At long last. Thanks so much for you patience.

This morning I also heard from Indra in Indonesia, so they’re getting out there.

I received my books today and they look wonderful. Sadhu!

Is there anyone in particular who I should focus on distributing them to?

Best to distribute them where they will be useful, places people will be interested and actually read them! Apart from that, I don’t have any real ideas, but perhaps reach out to local Buddhist groups?

My books arrived today! Thanks, @Deepika! 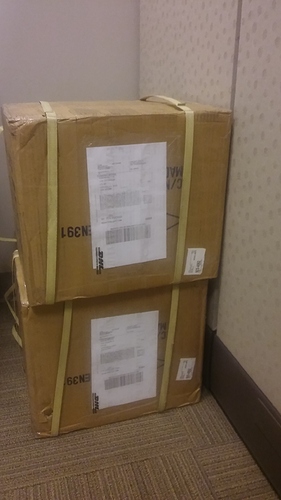 I’d like to send copies to some monasteries, and to some individuals (like the Jolly Good Fellow from Google that liked SC)…and academics (yeah, Facebook friends, mostly) that would have interest in this book. Here’s my question: can Bhante Sujato or his delegate create a pdf cover letter that I can enclose with the book inside the mailing package, so that when opened, the receiver appreciates what he/she is getting? I don’t mean to create work, but it’d be nice to send these off with a nice letterhead and cover letter. Does this sound reasonable?

Okay, first, which book are these? I’ll do a cover letter, and you can check if you like it.

Bhante, though I didn’t open the boxes yet, they would be the Sutta Nipata

Here’s a draft letter for you to check. If the numbers are not too great, I’d be happy to personalize it with each person’s name.

I’m going to work on a list of names and addresses, and some of the addresses I’ll need to source, such as academics at their universities. I will provide this list to you, once, it’s finished, if you like. I’m thinking that many can go out with the “Dear Friend” greeting, while some, per your good thought on this, will need to be personalized.

My thought was to send these out in January. The reason is that at, at least in the US, there are packages now being sent and delivered by the millions, and a. better to send once the crazy holiday season passes, and b. recipients won’t bypass the package, thinking it’s another box of stale Christmas chocolates from their accountant.

Why not send them now and say Merry Xmas?

I can do that!

Thanks for the cover letter, Bhante @sujato! Is it alright if I use it as well?

Also, @Anagarika, would you like to coordinate who we get in touch with so that we don’t contact the same people?

Yes, of course, please feel free for anyone to use. Also, let me know if any adjustments are wanted.

Also, @Anagarika, would you like to coordinate who we get in touch with so that we don’t contact the same people?

Brenna, that’s a very good idea. I have a list on MS Word I can send to you and Bhante, of some preliminary contacts. Brenna, you and I can coordinate, so that we don’t send to the same addressees. Thanks!

I just tried to SC email both of you with a MS Word list, but I can’t upload the list in that format. Is there a way to upload a MSWord doc?
M

I would suggest to just paste it as plain text.