Hi folks, we are having difficulty to release SC-Voice v1.4. The Voice website is down at the moment. We are busy working with the fire extinguisher…

We’ll let you know as soon as the site is back again.

Ouff… After a bit of extra work, SuttaCentral Voice v1.4 has just been released! The website is back running again!

So let me just give you a little description of what has been done with this release:

This time, much work has been done in the background and is not immediately visible to users, but it is the foundation and prerequisite for future new features and improvements. This includes the establishment of a staging server for testing the various steps of progress during the work on this release, as well as the expansion of the available disk space for storing the voice caches. And most particularly, it concerns the implementation of Voice Sound Modules (VSMs) which has been prepared and tested on a small scale and will be fully implemented for the next release. And each step of new operations features has also the effect of making Voice more independent of its initiator and so more stable for the future.

One of the most prominent features that will benefit from the implementation of VSMs will be the full support of Bhante Sujato’s audio recordings, both in English and in Pali. Another point will be that VSM technology will allow us to pre-cache all Voice sounds, so that there will be no more time gaps for playing or downloading the suttas.

But we didn’t forget our users and so still established a few features that are of immediate benefit with this release (or at least that’s what we hope): 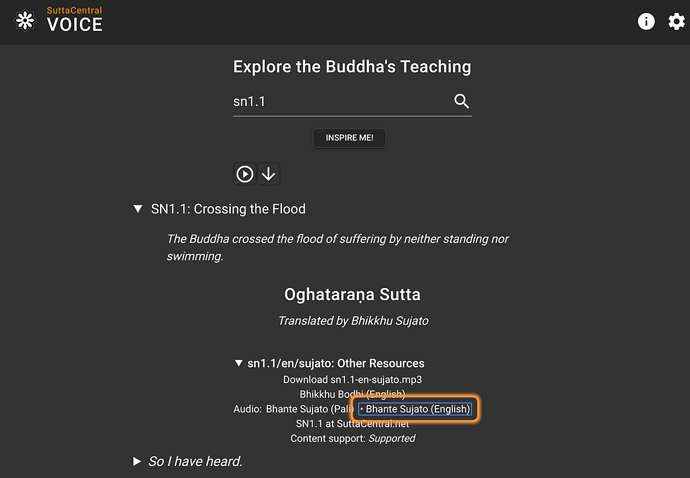 Next to this we could still fix a few more pronunciation bugs as well as one search bug. See here for the full list of release items.

There’s still much to do for Voice in the future. One thing that we are not yet happy about is the accessibility for users who rely on screen readers. The main idea of Voice is to make the suttas accessible for blind and visually impaired people, and this exactly isn’t very much the case right now. As already mentioned, the full support of human read voice recordings is something we would like to achieve soon, as well as the addition of the Vinaya as soon as Ajahn Brahmali’s segmented translations become available; and segmented translations into languages other than English; and root languages other than Pali… but that’s for a more distant future.

We hope you keep enjoying Voice and wish to invite your feedback here!

In the near future, perhaps even the next release, we hope to offer Bhante Sujato’s segmented audio. This will allow users to hear Bhante Sujato as they read each segment in the Suttacentral Voice sutta player. Segmenting human audio is quite difficult, but MichaelH and Bhante Sujato are working on segmenting his audios using aeneas.

Thanks for the hard work.