Can somebody advise which are the suttas that are related to sickness? How we cope and view sickness.

2“In what dwelling does the Venerable Anuruddha usually dwell so that the arisen bodily painful feelings do not persist obsessing his mind?”

3“It is, friends, because I dwell with a mind well established in the four establishments of mindfulness that the arisen bodily feelings do not persist obsessing my mind. What four? Here, friend, I dwell contemplating the body in the body … feelings in feelings … mind in mind … phenomena in phenomena, ardent, clearly comprehending, mindful, having removed covetousness and displeasure in regard to the world.

4“It is, friends, because I dwell with a mind well established in these four establishments of mindfulness that the arisen bodily painful feelings do not persist obsessing my mind.”

AN 10.60 girimananda sutta is really good.

The monk Girimānanda is sick. The Buddha encourages Ānanda to visit him and speak of ten perceptions.

I’d be interested to read what the commentary for that sutta says, but I suspect the ending of the sutta got a “hollywood ending” where he magically recovers from the grave illness upon hearing the 10 perceptions recited.

What would be much more realistic, and I suspect the true and original version of the sutta,
Girimananda dies at the end of the sutta from the grave illness, is reborn in the deva realm, with his memory of the 10 perceptions intact, as well as his memories of Dhamma, vinaya, the way of practice leading to Arahantship. Then abiding diligent, ardent, resolute, soon he realized the goal of the holy life…(attains arahantship while in the deva realm)

By giving the hollywood ending, AN 10.60 misses the point, and people treat it as another bojjhanga placebo paritta, a magical incantation to recover from illness.

What I seein this sutta, is the Buddha giving girimanda his final care package, a short summary of the holy life, so he can die well and quickly accomplish his mission upon rebirth in the deva realm with those 10 perceptions.

As the great lay disciple Anāthapiṇḍika lies dying, Venerable Sāriputta visits him and gives a powerful teaching on non-attachment.

In a general fashion, AN 5.57 (in which the Blessed One encouraged everyone to reflect often on the body’s natural inclination to sickness (and old age, and death)).

In case it is of interest, Ven Analyo has a book at in which he goes through numerous suttas (in the Chinese agamas and their Pali prarallels) which concern how to deal with illness 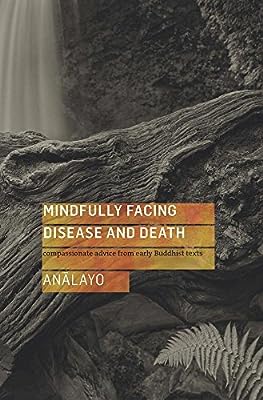