I have seen this podcast and have realized that Ven @Sarana is a member here. I have gotten permission to share this podcast freely. This podcast may hopefully shed some light to the current issues that the people of Myanmar face. Just by reading the description , listening to it and reading up on what is happening brought down to me the understanding of the the reality of dukkha .

May all be well

The decision to take an ethical stand at this moment was not reached casually. His breaking point came after soldiers began shooting randomly into peoples’ homes in Mandalay, which he found “disgusting,” and made him realize that there was truly no safety anywhere in the country. “By your very existence, you happen to be involved, whether you like it or not. So I thought, ‘This is this is quite a bad thing, I need to do something.’”

No, this was certainly not a light decision for a monk whose primary concern has been teaching the Dhamma to followers and pursuing his own intensive meditation practice. In fact, he so rarely keeps up with worldly events that he references several years ago seeing pictures of Donald Trump and not knowing he was the U.S. president, and did not himself even know that a coup had occurred until a week into the event.

But the world quickly caught up with him. The several young Burmese men who he looks after at the monastery demanded to leave and join the nonviolent protests, despite U Sarana’s warnings that they could very well be murdered in the street by a stray military bullet. Having acted as caretaker and guardian of these monastery helpers for years, U Sarana suddenly felt powerless to ensure their safety, and realized he needed to better understand the daily news to make more informed decisions to protect those closest to him.

For someone who was often years behind current events, U Sarana now found himself reading the news for 7-8 hours a day, and the dark reality he was confronting left him feeling “suffocated.” With little time left for meditation, he became plagued by nightmares in his sleep, and felt helpless in preventing the daily horror that continued to unfold before him. He was still reaching out to his virtual students, and the most pressing need was addressing how mettā meditation could be practiced with such senseless violence occurring daily on the streets.

While U Sarana has decided to take this strong moral stand, knowing fully well how much he risks by doing so, he does not expect every monastic to follow his lead. But other than those monks who are engaged in intensive meditation or study, he does not mince words about what he believes the ethical duty is for monks who oversee or instruct others. He says:

“They need to give the people what they want, and that is my favorite word, solace. And solace means the act of consoling, giving relief in affliction. I think that’s exactly what the people expect from monks. People will continue doing demonstrations, they will continue showing their will and they will continue to defy the rebels who are occupying the government premises. But the monks need to provide the people with peace. And they need energy, they need support, they need happiness, so that they see some purpose. There can be long term terror or there can be short term terror, and they have decided to go through the short term terror instead of the long term terror. I think the number one responsibility of monks is to provide the people with happiness with peace, and for the monks themselves to be the exemplary for this peaceful mind. They need to show the people that a peaceful mind still exists in the world. And they can lead the people and support them in having peace and having happiness, because that is what will give them energy and happiness to continue in striving for that what they believe is the best.”

U Sarana is also horrified to learn that some foreign practitioners buy into the argument that Buddhism can thrive no matter which ruler happens to be in power. He does not hold back his disgust on hearing that such a view is actually not that uncommon within some segments of the international meditator community: “It’s as if you took chicken feces, put it into one cart load, and then threw it on my head.” U Sarana goes on to attribute that opinion as coming from “lack of knowledge about history, because we need to understand the circumstances, like the idea that the military poses no threat to Buddhism, or that it’s basically the same whether there’s military or whether there’s democracy, is a very clear display of lack of knowledge about history in Myanmar.”

This is why he also has taken it upon himself to stay so informed at this moment, so that he doesn’t offer Dhamma advice that is so disconnected to the actual circumstances that he is no longer helping his followers.

The podcast can be listened to here : 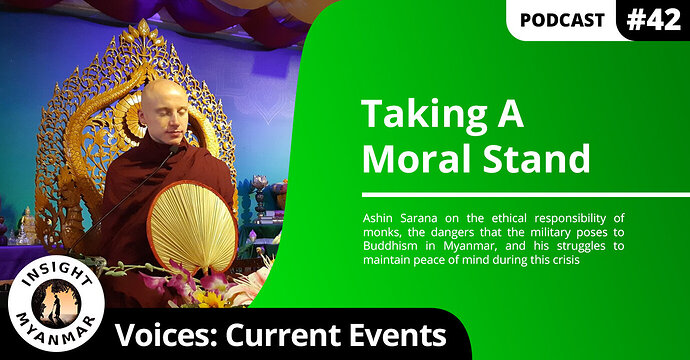 A Buddhist practitioner and teacher comes to the realization that “enough is enough.”