The Buddhist universities of ancient India 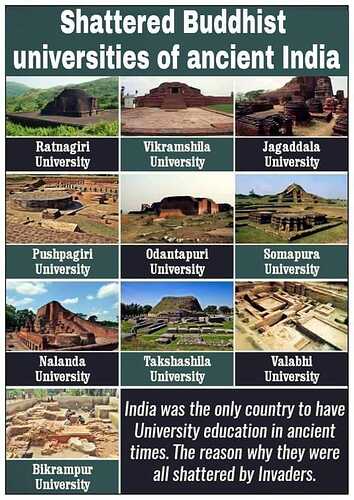 It is well-known that with the rise of Buddhism in India there dawned the golden age of India’s culture and civilisation. There was progress in all aspects of Indian civilisation under the impact of Buddhism. This is very much in contrast to what happened in the Roman empire in Europe with the rise of Christianity. With the coming of Christianity into power the Dark Ages dawned upon Europe. During this era whatever progress that was achieved by the Greeks and the Romans received a set-back and came to a stand-still. Schools and centres of philosophy were closed down. The famed library at Alexandria was burnt down by a Christian mob led by a prelate. Hypatia the learned philosopher and teacher was dragged into a Church and her flesh was torn off her body. As a result of these barbarities Europe was plunged into the darkness of ignorance and poverty for a thousand years. The Dark Ages of European history was really the golden age of the Christian Church, because it did the conversion of the barbarians to Christianity during this time. The great philosophers and intellectuals of Europe who left their mark on human civilisation were all pre-Christian pagans who lived prior to the rise of Christianity, e.g. Socrates, Plato, Aristotle, Seneca, Pliny, etc. The Christian era was masked by an absence of such men. Illiteracy and religious intolerance prevailed during the Dark Ages.

At the end of this period the Muslims had conquered parts of the Roman empire and established their rule in Spain, Portugal and parts of France. They introduced the learning of the Greeks and Romans as well as knowledge gathered from their contacts with India. This set the pace for Martin Luther’s reformation which broke the power of the Catholic Church. The ensuing liberal policies persuaded by the Protestants brought about the Renaissance, after this the Europeans pushed back the power of the Churches and began to make progress in civilisation.

In contrast to this with the rise of Buddhism in India, there arose many centres of learning which did not exist before. Buddhist monks could opt for a life of meditation in the forests, or a life of teaching, preaching, propagating the Dharma as a result of the activities of the teaching monks, seats of learning arose. These seats of monastic learning (Pirivenas) gradually developed and some of them became full-fledged universities. As a result Buddhist India came to have five major universities which achieved wide fame. These five were 1. Nalanda, 2. Vickramasila, 3. Odantapuri, 4. Jagadalala and 5. Somapura.