The color(s) of the Buddha's "Aura" - described in EBT?

While idly researching the symbolism of that all-pervasive (in Sri Lanka) Buddhist flag, the most authoritative description I could find referred to the colors in the Buddha’s “aura”. I searched for “aura” on suttacentral and found a few passages such as

“The aura of the Best Victor,
fathom-wide, shines just like the sun.”

There is no mention of colors, and if it was like the sun then I would expect it to be white light.

So I’m curious if anyone knows the (EBT or otherwise) source of these colors, if any?

BTW, I’m not trying to start a discussion about the reality or not of auras, just curious as to the history.

The Buddhist flag is a flag designed in the late 19th century as a universal symbol of Buddhism. It is used by Buddhists throughout the world. The flag was originally designed in 1885 by the Colombo Committee, in Colombo, Ceylon (now Sri Lanka). The committee consisted of Ven. Hikkaduwe Sri Sumangala Thera (chairman), Ven. Migettuwatte Gunananda Thera, Don Carolis Hewavitharana (father of Anagarika Dharmapala), Andiris Perera Dharmagunawardhana (maternal grandfather of Anagarika Dharmapala), C...

“So in that moment, that instant, the cry shot right up to the Brahma worlds. And this ten-thousand fold cosmos shivered & quivered & quaked, while a great, measureless radiance appeared in the cosmos, surpassing the effulgence of the devas.”—SN 56.11

Interesting that red, blue and yellow are the three primary colours in paint mixing theory, while white is the combination of all colours (in light theory). The use of these communicates the primacy of the Buddha on direct sense level, and they are also the colours of the kasinas. The function of murals like this is as meditation subjects.

The mention of the Brahma worlds indicates the aura is a conditioned phenomenon. 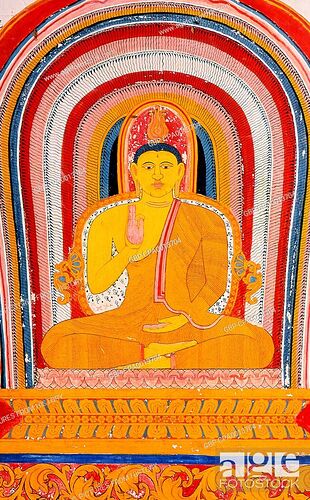 Of course, I did see the Wikipedia article, and a few other articles that seem to have been copied without attribution talking about some meanings of the colors. I thought this article was the most honest: 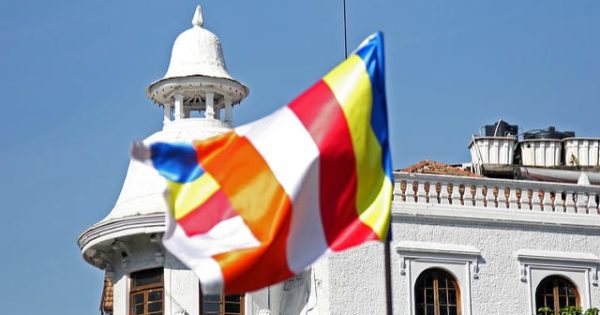 Danny Fisher speaks to Dr. Ananda W.P. Guruge about the Buddhist flag and its significance in celebration of its 125th anniversary.

“There was a belief that from the Buddha’s body emanated an aura, and that aura consisted of the colors blue, yellow, red white, and orange, as well as a mixture of all those colors.”
The way Dr. Guruge says this leads me to believe that he doesn’t know what the origin of this belief (about the colors) is either.

The art work tthat you show is intriguing - where is this found?

So I’m curious if anyone knows the (EBT or otherwise) source of these colors, if any?

In Pali sources I think the paracanonical Peṭakopadesa is the earliest text to mention that the Buddha’s aura had six colours (Peṭ. 240), but the specification of what the colours are first appears in a three-page account in the commentary to the Dhammasaṅgaṇī (Dhs-a. 13ff.; = The Expositor I. 16-18).

The colours are listed here in the Vinaya:

The colours are listed here in the Vinaya:

I’m not sure if this is the same as the chabbaṇṇaraṃsī of later texts.

It has only five colours, with odāta missing. It has phalika instead of pabhassara. And it refers to acci, ‘flames’, which isn’t included in the list of aura-related words in Moggallāna’s Pali thesaurus.

where is this found?

This mural is typical of Sri Lankan paintings of the enlightenment, where the realistic content (figure of the Buddha) is simplified to meet the abstract content of lines. shapes and colour, which is the main message. The aura consists of the three primary colours plus white, which is also the most simple and direct form of colour.
“Most of the existing ancient paintings of Sri Lanka fall under the category generally known as Kandyan paintings to the 1400 A.D – 1815 A.D. Kandy was the last capital of the Kandyan kingdom. Historians use this place to denote a historical period: but with regards to Sri Lankan paintings that term is used to indicate a particular school of painting in this era. These paintings are not limited to the district of Kandy.”