Who knows what style of chanting was used in the Buddha’s time?! Surely certain styles would have been used for the various genre’s of oral texts. Perhaps some of these may have been more melodic and emotionally affecting than the uniformly staccato and somewhat utilitarian style that has come down to us today, such as the Thai tradition. The Sri Lankan style is much more ornate, and complex, but can also be quite individualistic and sometimes can be difficult to follow as a group. I have always loved the 3 year old Dhammaruwan’s recordings, they are a window to an entirely different landscape of chanting the Dhamma.

Bhante Dhammika recently alerted me to a project he had been working on: The Edict Project. A greatly respected Carnatic vocalist, TM Krishna, chants the Edicts of Asoka in Magadhi. Krishna has a strong belief that music needs to help heal social divisions. It surely can be no accident that this track—with the theme of justice—was released on the anniversary of the first Ambedkarite mass conversion to Buddhism by Dalits on 14 Oct 1956.
Krishna has spoken out against casteism, Hindu dominance and other social causes. He has used his music to raise awareness of environmental issues, has worked with transgender musicians (Jogappas), as well as singing Christian and Muslim devotional songs—for which he received death threats. He responded by pledging to release a song about Jesus and Allah every month!

This recording features a few extracted verses drawn from Asoka’s edicts, including the Kalinga edicts., (but the translation is not consistent with Bhante Dhammikas translations.) NB: the word Dhamma is translated as ‘justice’ in the video. I suspect there are reasons for this, perhaps distinguishing Dhamma from the way it is used in Hindu cultures today.

Having studied a bit of classical Indian vocal music in my mis-spent youth, I’ll add a few tips for the uninitiated: This is performed in the Carnatic (south Indian) vocal tradition, in a mode (or raga) called raga tala malika, which has certain technical features about the scale of notes used and the rhythm. The performance is largely extemporaneous, but based on previous practice. Krishna carefully explores a line at a time of the verse, developing it and creating variations. He then goes through each verse in its entirety a few times—this is when you’ll notice the original Brahmi written script pop up in the video. Other times (such as when there is no subtitles) he improvises, singing ‘sa re ga ma…’ the name of the notes at their pitch in the scale of raga tala malika. The expansive hand gestures are an important part of Indian vocal performance, regarded as pulling the sound in from the cosmos and manipulating it, almost like energy.

“All my people are my children. I yearn for their welfare…” 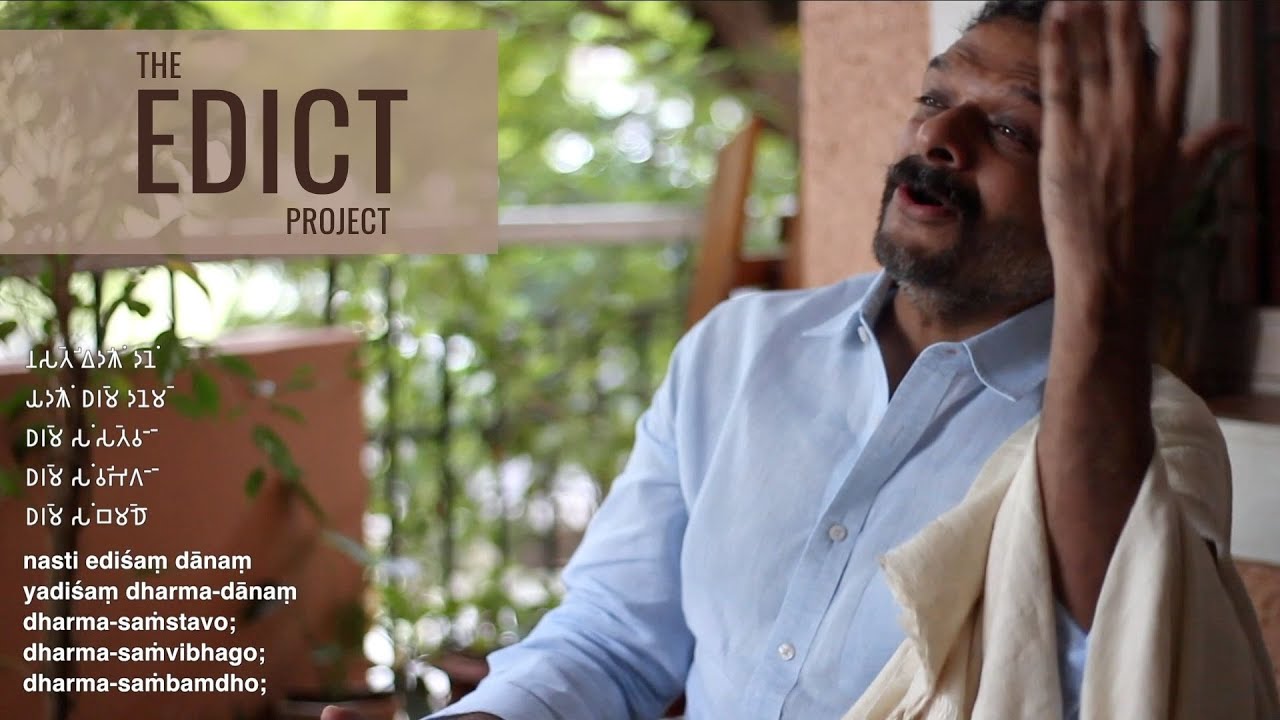 Emperor Ashoka would be proud! Because much of the population at the time was illiterate, he actually had people stand in front of his edicts and recite ( or maybe sing!) them out loud. Giving a voice to these edicts is exactly what took place over 2 millennia ago

With the rewriting of history, even about Emperor Ashoka, by elements of the Indian government, projects like this need to be supported

Wonderful performance, may TM Krishna be safe from harm and be able to continue his work bringing about communal harmony ( and preserve history)!