The Suttas have a brief description of a funeral casket for royalty. It’s found famously in the Mahāparinibbāna Sutta (DN 16), and less famously in the Nārada Sutta (AN 5.50).

The latter deals with the grief of King Muṇḍa when his wife, Queen Bhaddā, passes away. Obsessed with brooding by her corpse, he requests a special coffin for preserving her body, so he can see her longer. The coffin is described in terms identical with the Wheel Turning Monarch’s coffin in DN 16:

Now, both Venerables Bodhi and Ānandajoti translate this as if it meant “place the body in an iron coffin, and enclose it in a second iron coffin”. But this is an odd way to place a body, surely. And, as the Nārada Sutta makes clear, such an arrangement was meant to facilitate preserving and viewing the body, neither of which are helped by a second casket.

The relevant verb here, paṭikujjati does not actually mean “enclose”. The basic meaning is to “bend, crook”, so it more naturally means to “close up or cover” the casket, i.e. to cover it with a lid, rather than enclose it in a second casket.

This sounds almost exactly like a faddish means of internment from 19th century America, the Fisk Casket. Fisk metallic burial cases were patented in 1848 by Almond Dunbar Fisk and manufactured in Providence, Rhode Island. The cast iron coffins or burial cases were popular in the mid–1800s among wealthier families. While pine coffins in the 1850s would have cost around $2, a Fisk coffin could command a price upwards of $100. Nonetheless, the metallic coffins were highly desirable by more affluent individuals and families for their potential to deter grave robbers. The case was custom-formed to the b...

You can see an example of one here: 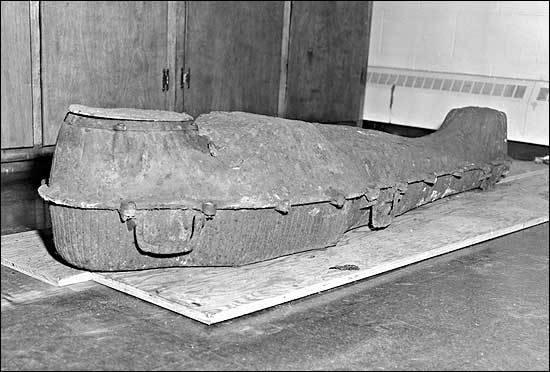 The Fisk Casket was used by the wealthy as a way of preserving the bodies better (especially for transport and the like), and could also be fitted with a window to enable viewing. It thus fits the description in the suttas perfectly. The casket was intended by the king to be filled with preserving oils, and probably fitted with a window, or perhaps a hinged top, so he could continue viewing his beloved.

Needless to say, the king’s unhealthy obsession did neither he nor his nation any good. But did he get over it? No spoilers here, you’ll have to read the sutta to find out!

it more naturally means to “close up or cover” the casket, i.e. to cover it with a lid, rather than enclose it in a second casket

Venerable Nyanatiloka seems to have come to the same conclusion.