In order for the Upanishads to make sense, I think you need to be ripped out of your mind on “Soma”, the sacred coctail drug that the ancient Vedic compilers were extremely fond of. It’s a mixture of ephedra (a stimulant almost exactly like cocaine), Poppy extract (Opium), and Marijuana (I learned that in a 6-part BBC documentary on India, but I can’t remember which part stated this).

In order for the Upanishads to make sense, I think you need to be ripped out of your mind on “Soma”, the sacred coctail drug that the ancient Vedic compilers were extremely fond of. It’s a mixture of ephedra (a stimulant almost exactly like cocaine), Poppy extract (Opium), and Marijuana (I learned that in a 6-part BBC documentary on India.

In order for the Upanishads to make sense, I think you need to be ripped out of your mind on “Soma”

What would you say if someone said

“In order for the Buddhadharma to make sense, you need to become significantly less critically thinking. Buddhadharma practitioners sit on cushions doing nothing for hours on end while their higher faculties atrophy to achieve this.”

what do these names/qualities of the 33 gods mean?

That’s difficult to answer satisfactorily. In a way the Vedic aryans certainly believed that they were ‘real’ enough to pray to. But as @suci1 pointed out they are more complex than our usual angels or Greek/Roman deities.

I think it’s safe to say that the EBT don’t take them metaphorically. Whatever they are, the deities are pretty real to them. If the Buddha himself taught and saw them is a different matter. But again, the devas appear in the oldest pericopes, so if you distrust the deva-authenticity you might as well distrust all the suttas.

If they are in fact real or not - who can tell? If you read the Ajahn Mun biography even meditation masters today believe they are real. Do they have ‘proof’? hm…

I don’t think you understand how intimately intertwined drugs are with religious experiences in Hinduism (which I don’t condone). I learned several highly interesting things from ex-Hindu monks, who had re-ordained as Buddhist monks (and explained Hinduism to me in greater detail). Here’s what they told me (which you can choose to believe or not). Please think over the following:

I could go on and on, but perhaps this is enough.

It seems unlikely to me, that it was taken over into Buddhism. Since when is Aatman a Buddhist deity?

Do we have any list in the four Nikayas about who the gods were? (nothing pops into my mind at least) why wouldn’t it be taken from the old Indians? The EBT obviously took over the category, not the individual deities.

I wouldn’t like to learn Buddhism from disappointed ex-buddhist monks (indeed I heard not so nice things about Buddhism from those). Also the stories they told about contemporary Hinduism don’t have to apply to the practice 2500-4000 years ago. Have you read historical research to back it up?

Granted, Soma probably was some hallucinogenic drink but one cannot reduce everything to it. Also I would be curious how they would have found out the original recipe if you remember a title of the documentary?

Also I would be curious how they would have found out the original recipe if you remember a title of the documentary?

Follow my link to the documentary, above. It was a very famous (even legendary, apparently) Russian archeologist (whose name I can’t remember), who gets interviewed by the host, and it’s this archeologist who says the recipe contents. He show the host the very place where the Soma got concocted in an ancient, unearthed Hindu temple (where the Soma sacrifice was performed) that he and his team were unearthing.

BTW: I’m not claiming expertise in any of these areas. It seems you are all demanding a high level of clinical precision in a place where it’s unlikely that you are ever going to find it.

@subharo, that sounds like a very narrow view you got. Even just using the term “Hinduism” which is a bit like saying “Europeanism”, there’s a lot of ground to cover.

I don’t think there’s any real consensus on the soma recipe, the evidence is quite scant. To reduce the whole of Vedism to soma-use is really overreaching, that’s just one part of a religion more nuanced than you would make it seem.

Regarding ganga/bhang (cannibis) use among yogis/sadhus/ascetics, yes, there’s definitely some sadhus and lineages that do consider it sacred — but, that’s not across the board (there’s definitely not even just one kind of sadhu tradition). Most Buddhist monks don’t meditate.

@subharo, that sounds like a very narrow view you got. Even just using the term “Hinduism” which is a bit like saying “Europeanism”, there’s a lot of ground to cover.

Even though I know relatively little about Hinduism/Brahminism/whatever, the small amount I know probably exceeds about 99% of average (non-Asian-descent) Westerners out there, who are taught virtually nothing about it in school. This amount of knowledge is apparently disappointing to you, but oh well, you can’t please everyone.

At least be glad you found something to nitpick, if you can’t be grateful for the non-trivial efforts I put in to research and assemble the list in the OP (for what it’s worth).

This amount of knowledge is apparently disappointing to you, but oh well, you can’t please everyone.

Not the knowledge is the problem but the seemingly sweeping condemnation of a whole set of Indian traditions. I think many people get something out of the Upanisads without being high. Also some of the brahmins in the EBT are not potheads but skillful debaters, interesting enough for the Buddha to consider them as prime candidates for the Buddhist teaching.

If I put on the polemic hat I could also point out extremely ‘stupid’ things about Buddhism. But why would I - especially if it’s not based on consolidated research? In the end it would just come across as derogatory speech.

Video should start 34:49 in, where the the host buys “Soma” tea in a marketplace. Then he goes to an archeological dig to interview the Russian archeologist, Viktor Sarianidi, from the Institute of Archeology, Moscow.

Many poems in the Rig Veda extol the merits of taking Soma, apparently, but then he also says Soma is no longer used in modern day India, in Hinduism.

It’s shortly after 42:03 where Sarianidi lists the ingredients of Soma as “Poppy, Cannabis, Ephedra”: 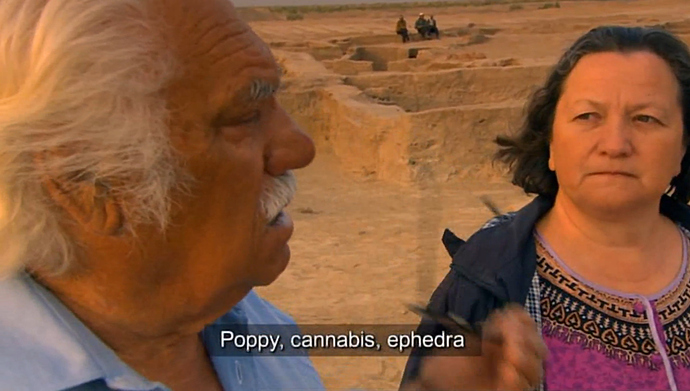 I think many people get something out of the Upanisads without being high.

It was a tongue-in-cheek statement. Apparently the Internet is a bad place to make such statements. I’m sorry if you took offense.

Thanks for the clarification. Indeed the written word makes it difficult (for me) to understand a funny comment

Unfortunately the documentary is not satisfactory in terms of research. Here is an okay article about Soma.

The important thing to keep in mind is that Soma was lost to the ancient Indians anything between 100-500 years before the Buddha. So any ‘rediscovery’ of a Soma plant has to be seen with a lot of caution.

Just for those interested in details of the Soma topic that came up. Harry Falk who is very familiar with the texts wrote good articles about Soma and favors the stimulant Ephedra here and here.

The Hindu prohibition on eating cows is a relatively recent development in Indian history, and does not seem to have been present during the period when soma was still part of Vedic ritual.

Vigilante Hindu groups in India have lynched several people for eating beef. A scholar traces the history of beef-eating in ancient India.

Who are the gods of lesser radiance? Is there a description of their appearance anywhere? Are they uniformly radiant? Do they have two arms, two legs and a superradiant head obscured by white light? Is there a realm described in the early teachings or commentaries where there is a vast peaceful ocean- like expanse and beaches made of a phosphorescent white stuff - instead of sand?

Is there a deva-realm where there are enormous natural fountains in lakes?

Are there descriptions of the realm of the non-returners?

The “gods of lesser radiance” - in Paali: paritta + aabha

In Buddhist cosmology the planes belonging to the three lower Jhaanas are grouped into set of three planes each.

1st Jhaana: 3 planes. The highest is “Mahaa-brahma”, followed by “ministers of Brahma” and “followers of Brahma”.

One would tend to think, that the three planes connected with each of these types of Jhaana-consciousness, are distinguished by the extent of mastery developed in each of these Jhaanas, while practicing them as human beings (before being reborn in the corresponding Brahma world).

The most important feature of these beings is their rebirth in the realm of fine matter, outside the realm of sense-pleasures. So they are much more sublime than the denizens of the six deva planes, who are also described as “gods”.

So the “parittaabha brahma-s” - gods of minor radiance - are in no way “minor”. They are absolutely highly developed sublime beings. Their radiance is minor only in comparison with the radiance of the Brahma gods in the two planes above them.

@akincana
Is this cosmology from the suttas, early/late abhidhamma, or later commentaries?