The harmful and unbeneficial actions of Pasenadi of Kosala

What were the harmful and unbeneficial actions of Pasenadi of Kosala?

I ask because I had read a lot about him, but only recently began to realize that my information came from mixed sources.

Now I wish to investigate how much of it came from the EBT’s and how much was created by later commentators in order to “explain” things.

Ultimately, I wish to get a clearer idea of the harmful and unbeneficial actions of Pasenadi of Kosala as conveyed through the EBT’s. 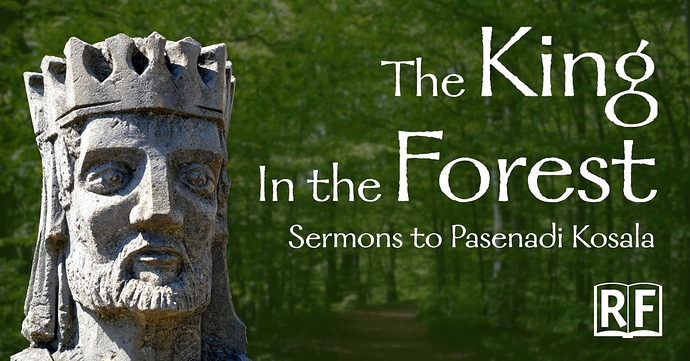 The King in the Forest: Teachings of the Buddha to King Pasenadi Kosala :...

All of the discourses preached to King Pasenadi Kosala, including stories from the commentaries.

There is no pdf version yet, but the page lists all the suttas included.

The Apendix has the stories from the Dhammapada commentary.

The list of suttas with King Pasenadi from SuttaCentral overlaps with the book mentionned above but has a few additional suttas, in case you’d like to check them out…

An article by Mun Keat Choong in which a few suttas with King Pasenadi are compared to the different Chinese parallels. And he finds a few differences. One of which states:

A comparison of the Pali and Chinese versions of the Kosala Samyutta, an...

A comparison of the Pali and Chinese versions of the Kosala Samyutta, an early Buddhist discourse on King Pasenadi of Kosala

The list of suttas with King Pasenadi from SuttaCentral overlaps with the book mentionned above but has a few additional suttas, in case you’d like to check them out…

I just went through this list and the only suttas on this list not in the book are ones where King Pasenadi is mentioned by name. But they don’t really give any more information on him in particular. He is mostly just given as an example of a king. And a couple of the Udana suttas are duplicates from the Kosala Samyutta.

It should also be noted that in the anthology, some of the suttas in the Kosala Samyutta also don’t include the king in a speaking role.

Does anyone know how I can discern what material on Pasenadi is “commentarial” and what is “EBT”?

Like is the incident with Mallika and the dog “commentarial” or “EBT”?

Likewise the part where it said in one sutta that Pasenadi had slave labors whipped and forced to do labor with tears running down their eyes?

Is there any examination of this topic to nuance what parts are “commentarial” and “EBT”?

I’ve tried to write several replies and I keep getting bogged down in terms!

Traditionally what is commentary is clearly defined. For example the unfortunate situation with the dog is commentarial. it is found in the Dhammapada commentary. The books themselves are called commentaries.

By definition, traditionally, suttas are not commentarial. So your regarding your question, “Likewise the part where it said in one sutta…” … by definition it’s not commentarial if it’s a sutta. However the question of whether it is an EBT is another matter. Different people have different criterion on deciding what is earlier and what is later. And many traditional Theravada Buddhists would not recognize a meaningful difference between earlier and later sutta texts.

The commentaries do seem to include lots more bad behaviour, though!! But I don’t believe that one can then work backwards and say that because something in a sutta includes bad behaviour that it therefore means it is later.

One thing I think its good to remember is that for one, we don’t know when most of the suttas with King Pasenadi happened in relationship with each other. Of course the Piyajātika sutta seems like it must come early in his relationship with the Buddha and the Dhammacetiya sutta must come at the very end.

And for another, I think it is incorrect to think that the king would not do bad things after he had gone for refuge to the Buddha. For me this is one of the most compelling aspects of the life of Pasenadi. He clearly has a mixture of good and bad qualities that manifest throughout his life. It’s not recorded anywhere at what point, if ever, he became a stream enterer. But despite his shortcomings he shows many wonderful qualities. His willingness to be taught Dhamma by his wife and change his position. His reflections on life and his habit of checking them with the Buddha. His ability to use the teachings in his life, as we see in the weight loss verses. And of course the faith he shows to the Buddha by the end of his life.

So often we see examples of profound life conversions in the suttas. For me, it’s wonderful to see someone exploring the teaching in a way that is more familiar to those of us who ar less meritorious individuals.

But despite his shortcomings he shows many wonderful qualities.

Absolutely spot on! King Pasenadi has always struck me as a good man who tried to do his best, despite the circumstances of his life. Someone who was much like us.
If one wants to consider harmful and unbeneficial actions, why not think of the chieftain Payasi?

If one wants to consider harmful and unbeneficial actions, why not think of the chieftain Payasi?

I asked because that seemed to be a more black-and-white case.

I was a little bit more unclear with Pasenadi because it was difficult for me to discern how much of the information about him was from early sources and how much from commentary, which parts were true and which parts were false.