Too often we skirt around the fifth precept, failing to make the case that alcohol is a massive source of suffering for people everywhere. This article—at turns hilarious and devastating—lays it out. 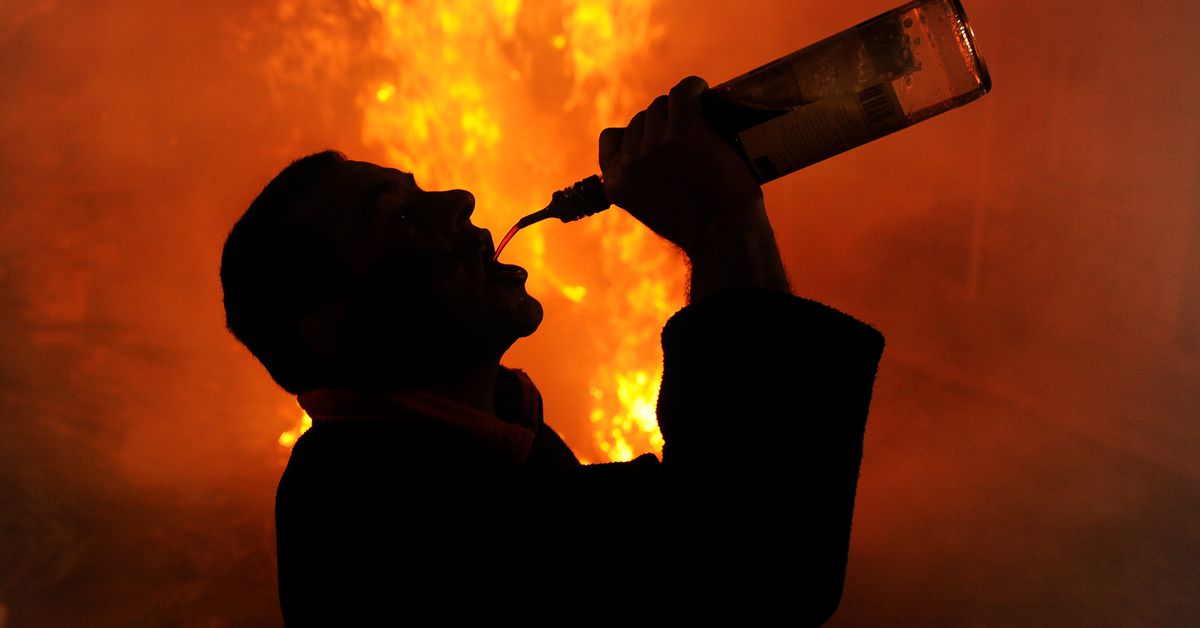 Imagine if the media covered alcohol like other drugs

Meet alcohol, the drug making people run around nude and collapse in the streets.

How should one interpret the fact liquor is not found in any of the more serious offenses like the parajika or sanghadisesa?

To dispel any doubt about his reasons for prescribing this precept, the Buddha has written the explanation into the rule itself: one is to refrain from the use of intoxicating drinks and drugs because they are the cause of heedlessness (pamada). Heedlessness means moral recklessness, disregard for the bounds between right and wrong. It is the loss of heedfulness (appamada), moral scrupulousness based on a keen perception of the dangers in unwholesome states.

Heedfulness is the keynote of the Buddhist path, “the way to the Deathless,” running through all three stages of the path: morality, concentration, and wisdom. To indulge in intoxicating drinks is to risk falling away from each stage. The use of alcohol blunts the sense of shame and moral dread and thus leads almost inevitably to a breach of the other precepts.

One addicted to liquor will have little hesitation to lie or steal, will lose all sense of sexual decency, and may easily be provoked even to murder. Hard statistics clearly confirm the close connection between the use of alcohol and violent crime, not to speak of traffic accidents, occupational hazards, and disharmony within the home. Alcoholism is indeed a most costly burden on the whole society.

When the use of intoxicants eats away at even the most basic moral scruples, little need be said about its corrosive influence on the two higher stages of the path. A mind besotted by drink will lack the alertness required for meditative training and certainly won’t be able to make the fine distinctions between good and bad mental qualities needed to develop wisdom.

The Buddhist path in its entirety is a discipline of sobriety, a discipline which demands the courage and honesty to take a long, hard, utterly sober look at the sobering truths about existence. Such courage and honesty will hardly be possible for one who must escape from truth into the glittering but fragile fantasyland opened up by drink and drugs.

– Source: A Discipline of Sobriety, by Bhikkhu Bodhi

Unfortunately, Bodhi seems to believe that alcohol use will usually, often, regularly result in alcoholism - which doesn’t seem true.

Then of course there is the occasion for taking a glass of wine on medical advice, which does not seem to be the same as pounding shots at a bar. Medical marijuana for seizures, all manner of opioids for pain management… in short, the substance simpliciter is not the issue when they are used in a medical context.

I remember many years ago when I was a young state’s attorney prosecuting DUI cases in California. The law at that time made .08 percentage of alcohol in the blood presumptively under the influence. Any level of THC in the blood was determined to be DUI and resulted in a conviction.

For many people, far less than .08 results in impairment and inability to safely operate a vehicle. Yet, a toxicologist that I worked with at that time ( we had to use a toxicologist to prove the case) would tell me of studies that demonstrated that drivers with some THC in their blood actually drove better than those with none. Drivers with even small amounts of alcohol in the blood always drove worse. Yet, per the article that Bhante provided, cannabis is still classified at the federal level as a Sch. 1 drug, with heroin.

The best part was, while working on one case, the expert invited me to his house/lab, to review a case. He proudly showed me his backyard, with its lovely cannabis garden (very illegal at the time). Of course, he trusted me, but that said a lot about our deluded attitudes in the US toward alcohol and marijuana.

Yet, per the article that Bhante provided, cannabis is still classified at the federal level as a Sch. 1 drug, with heroin… said a lot about our deluded attitudes in the US toward alcohol and marijuana.

Schedule 1 drugs are without medical use and very likely to lead to addiction. Heroin counts… and so does tobacco. Cannabis does not fulfill either aspect of the Schedule 1 definition. So that’s the pile of ignorance around weed; in general, people need to educate themselves out of these misunderstandings.

Furthermore, in my experience teetotalism leads to arrogant righteousness, “holier-than-thou” attitudes, universal condescension towards casual use, and objectification of & uninformed generalizations about those suffering from substance addiction.

Good points, @daverupa. I appreciate that first of all, the precepts are training rules, designed to keep us properly on the Path. Having said that (as you note) , there are medicinal uses of cannabis, and there are cardiologists that recommend a few ounces of red wine to middle aged people for heart health. I mention this only as the 5th precept can, at least in my view, be unskillfully perceived as a strict ‘commandment,’ the violation of which brings on the dukkha of sin and guilt. So, if someone benefits medically from the use of cannabis, I am in favor of that use as medicinal and not a blunt violation of the 5th precept/training rule. Naturally, we don’t want to see monks with a joint, or sipping a glass of cabernet. At the same time, alcohol is a very dangerous drug, relative to cannabis, and the 5th precept needs to be observed seriously. Our wise and mindful observance of these precepts is our kamma, and our degree of observance directly influences the quality of our training and bhavanas.

This is because of the United Nations Single Convention on Narcotic Drugs of 1961 and similar international treaties pushed upon other countries by the US and it’s allies.

The foundation for the law in the United States is clear, and within my research experience. Have you anything on the foundations for international law?

This is because of the United Nations Single Convention on Narcotic Drugs of 1961 and similar international treaties pushed upon other countries by the US and it’s allies.

maybe Soviet legislation did comply with the UN documents although i’m not sure this particular one was ratified by it, but certainly not due to the US coercion

The implications for the fifth precept are interesting. Let’s look at four examples:

Mapping the precept to secular law doesn’t seem to work, which is why I prefer to focus on the non/medicinal component. (Also, notice that inebriation admits of degrees, with significant variation across substances & individuals. This affects medicinal dosing, baselines for assessing abuse, etc.)

We can look at some CDC information:

Wow, it’s gotten really bad, hasn’t it? In Tennessee and Alabama there’s more opiate prescriptions than there are people. And in the US as a whole, more users of opiates than tobacco:

Acknowledging the harm, the foolishness and uselessness of using alcohol and other intoxicants and giving up taking it completely is indeed a very important first step. I truly cannot understand how some people claim to meditate but still carry on this habit.

I reckon the first time I really consider to have had a ‘meditation session’ was few years after giving it up completely! Just to smell it in the air when I walk by a pub in the city (usually on Fridays) or meet/interact with someone at work with alcohol in his/her system (I tend to be able to smell it even 24 hours after they have ingested it) sickens me so much.

Interestingly, in the Vinaya’s Bhikkhu Vibhanga one will find mention to alcohol only in the chapter concerning the offenses requiring expiation, more specifically the Pācittiya #511.:

“In drinking fermented liquor and spirits there is an offence of expiation.”

Should drink means: if he drinks even (as much as) with a blade of grass, there is an offence of expiation.

The origin story is even tragicomic: a monk missing a specific type of spirit hints a lay devotee it could be an offering and end up taking too much of it being found later - by the Buddha himself! - totally drunk and laying on the floor!

How should one interpret the fact liquor is not found in any of the more serious offenses like the parajika or sanghadisesa?

Does it mean it was a basic assumption that someone who took the robes would have given up alcohol much earlier in his spiritual life?

Let me point as well that as per AN4.50 it seems that at the time of Buddha one could find some contemplatives and brahmans who would drink alcohol and fermented liquor.

The overprescribing of opioids in the US is really part of almost a criminal conspiracy between drug manufacturers and doctors who are paid fees and honorariums to prescribe medicines. Many of the drug companies pay large fees to doctors to promote certain drugs, so as was alluded to before, we have a drug cartel in the US that has lead to the disability and deaths of many, with the co-conspirators being highly paid Big Pharma executives, and ethically challenged doctors willing to accept huge fees and insurance payments for drugs that are either unnecessary or outright dangerous for patients.

With the Trump administration, I will expect to see less regulation of these activities, and even the Obama administration was late in the game to address this problem. Corporate greed and delusion may have an easier path in the US over the next four years, and people will suffer. It’s a terrible situation, and it will only be addressed when the (profiteering) insurance companies get tired of paying for these abuses.

Disclaimer: I hope it’s OK to resurrect a thread that no one has commented on in two years.

I only started practicing Buddhism in the past year. Since I have started taking the Five Precepts it has become apparent to me A) how pervasive intoxicants are in Western societies, and B) how lightly many people take the practice of getting drunk, high, or otherwise intoxicated.

In particular, I have come to see how much of a role alcohol plays in the cultures of Europe and North America (and presumably other countries as well). As a social scientist I am kind of “required” to read The New York Times every day to stay up on current events. It seems as if a day doesn’t go by that the Times does not have an article celebrating the art of beer, wine, and cocktails. The topic is covered as if alcohol is the height of fashion.

Also, in the two years since the last post was made in this thread, several states in the U.S. have legalized recreational use of marijuana, and the entire country of Canada made recreational marijuana use legal this year. Many European countries also have de facto de-criminalized casual marijuana use, or at the very least, do not prosecute it as a crime.

I am not some sort of scold. People are free to do as they please. But now that I refrain from all use of intoxicants it has dawned on me how lightly Western (and other) cultures treat the use of intoxicating substances. As an educator I see the harmful effects of substance use on my students. Many of the students who flunk out college abuse alcohol and/or drugs. But even casual use seems to me to have become trivialized to the point that many people don’t see how altering one’s mind and mood interferes with thinking, personal relationships, and work pursuits.

Or perhaps I am just exercising the perspective of someone new to Buddhist practice. I don’t want to come across as judgmental. I’m just noting.