The meaning of beauty 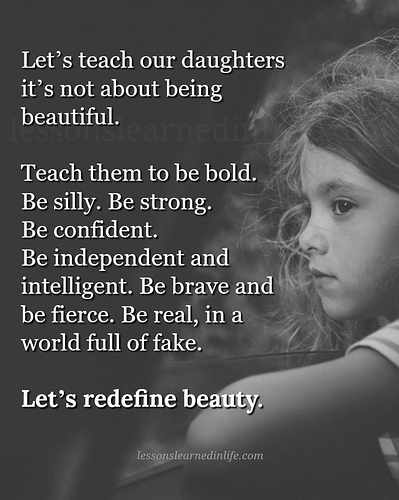 I am the eldest in a family of daughters. Something that I am eternally grateful for, is that my father raised me essentially as the eldest ‘son’. I never knew that girls were different to boys in any way except for physique. It was such a shock to discover that this wasn’t a universally held perception.

Why women have to be silly?
I want women to be women not men.
Be yourself. Do not pretend. Be wise.

Although there are nice qualities which I would gladly teach to our sons also, it is more about being true in a fake world. To be beautiful let’s teach them about goodness and morality, kindness and compassion. I always prefer beautiful people being gentle than being fierce…

Unfortunately being beautiful means something completely different to many people: 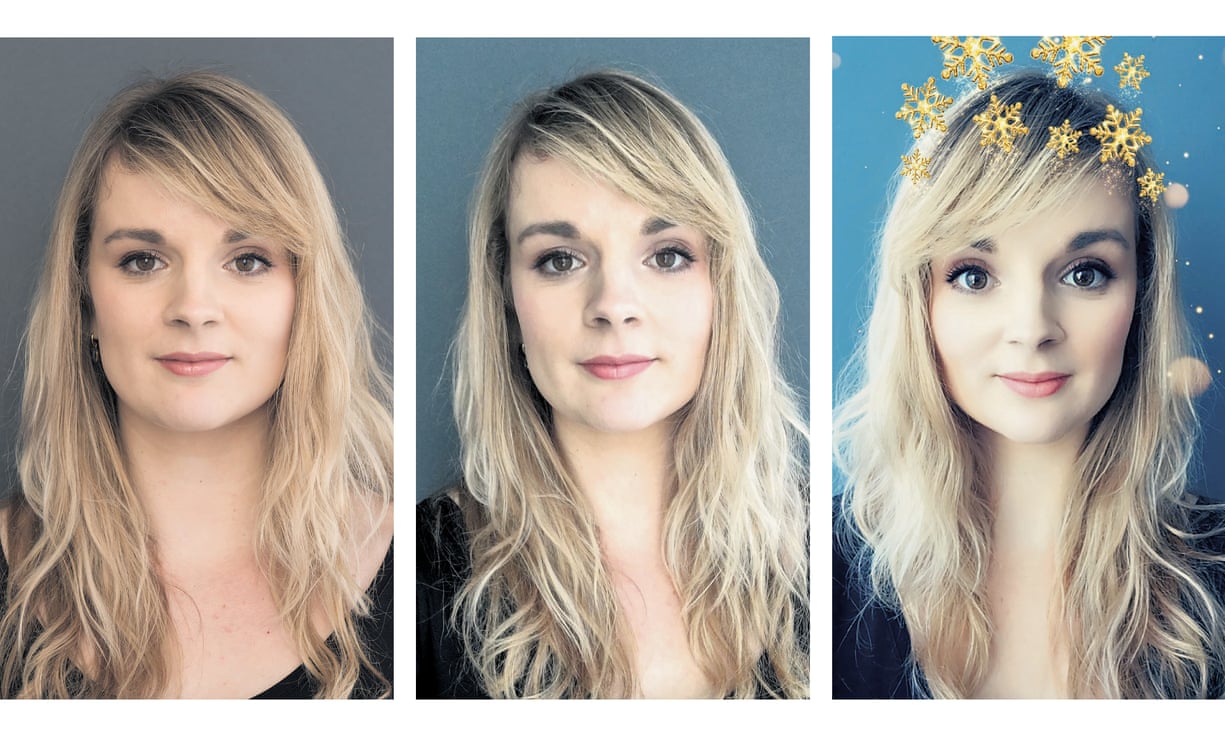 Faking it: how selfie dysmorphia is driving people to seek surgery

Filters have never been more prevalent – and it’s leading some people to have fillers, Botox and other procedures. What’s behind the obsessive pursuit of a flawless look?

which is really sad:(

Regarding feminism - I think it would be a better idea for men to become more like women (more kind, compassionate, caring) than for women to be more like men (aggressive, ruthless, career-oriented, loud). Equal rights and respect for everybody are always deep in my heart but there are side effects of feminism movements which I don’t like like. One is the generation of young girls drinking and fighting on the streets and the other is replacing right to work with duty to work (from economic reasons). Many women no longer have a right to look after their children (sent to a nursery) or parents (sent to a care home) as they are forced to work.

What does Fierce mean in slang?
A: “Fierce!” (slang, US) Of exceptional quality, exhibiting boldness or chutzpah. Tyra said to strike a pose and make it fierce.
fierce - Wiktionary

That’s the problem with words, ey? It is a sick post:)

used by ‘chavs’ to state that somethings is good

From MN77 when we give up internal forms in order to see what is as it is:

Not perceiving form internally, they see visions externally.
This is the second liberation.

We can finally appreciate inherent beauty:

They’re focused only on beauty.
This is the third liberation.

But to get there, we have to give up internal forms.

It burns, is defiled.
It’s the bait of the world,
constraining, the bondage of death,
maddening, deceptive, agitating the mind.
It’s a net cast by Mara
for the defilement of living beings:
with endless drawbacks, much pain,
great poison,
giving little enjoyment, creating conflict,
drying up the good side [of the mind].
I, having caused much trouble like this
because of sensuality,
will not return to it,
as I always delight in Unbinding.
Doing battle with sensuality
in hopes of the cool state,
I will stay heedful, finding delight
in the ending of fetters.
I follow the path —
eightfold, straight,
griefless, stainless, secure —
over which great seers
have crossed."

See this Subha, the goldsmith’s daughter,
standing firm in the Dhamma,
entering the imperturbable state,
doing jhana at the foot of a tree.
This is the eighth day of her going forth
confident, beautiful through the true Dhamma.
Trained by Uppalavanna,
she’s a three-knowledge woman
who’s left death behind;
freed from slavery, debtless,
a nun with developed faculties,
set loose from all ties,
her task done,
fermentation- free
Subha: The Goldsmith’s Daughter

I saw an add for a program on ‘autism’ the other week. It said it could be widespread - mild forms of it. I wonder if Buddhism is immune to this? I have also listened to some Buddhists that sound like pessimists others, sound a bit depressed. Is it possible that some may find solace in their understanding of Buddhism - without realising what they bring to it? We don’t arrive on the scene without a ‘story’ that we live by - do we? A philosophy webcomic about the inevitable anguish of living a brief life in an absurd world. Also Jokes

Is it possible that some Buddhists are practicing in a way that doesn’t help much. They may have an understanding of practice that seems to affirm the reasons for their dukkha but, offers no genuine means to it’s resolution? What about the Vipassana tradition - does it work?

I mean, the ending of dukkha - not just a temporary respite and lots of devotion and faith.

There is much which is beautiful in the dhamma and in the practitioners, and in the environment and so on but this isn’t the same as saying the underlying nature of dhammas are profoundly (nibbida) dukkha. One is simply an observation and the other is wisdom or an insight.

If dukkha is the fundamental reality of existence - as you say - it doesn’t mean we have to spend our days wallowing in misery - does it?

We can find many beautiful things to do with our time in the midst of dukkha. There is no contradiction.

The underlying nature of dukkha is the fact that it has no underlying nature - no essence - it’s empty of it’s own nature. It’s just empty phenomena rolling on. That’s not to say dukkha doesn’t exist - it still hurts.

Sentient existence includes pain and suffering - it’s no secret. That does not mean there’s nothing beautiful in life and, living. We are not going to find ultimate happiness in life but, that doesn’t mean we should not have an appreciation for the blessings we live with, day in, day out.

If you’re life is full of misery and you have never had a single beautiful experience in your life - try Buddhism!

You never know your luck in a big city!

underlying nature of dukkha is the fact that it has no underlying nature - no essence - it’s empty of it’s own nature. It’s just empty phenomena rolling on. That’s not to say dukkha doesn’t exist - it still hurts.

By ‘underlying nature’ I mean common principles applicable to dhammas, or that similarity which is shared by all experiences that are fabricated (other than nibbana, which is not). Impermanence, unsatisfactoriness, no-self nature, causally arisen nature, insubstantiality are all features of phenomena. It’s to be realised, not wallowed-in emotionally.

Goodoh - there seems to be some kind of communication barrier that makes it difficult for you to ‘recieve’ what is actually being said, in contrast, to what it is you choose to make of it - for reasons unknown.

Goodoh - there seems to be some kind of communication barrier that makes it difficult for you to ‘recieve’ what is actually being said, in contrast, to what it is you choose to make of it - for reasons unknown.

It takes two to communicate. Not one. Writers also bear responsibility.
Please restrict the pointing of fingers to mirrors.
Choose different words to speak your truth.

It would appear that this topic has veered far from the OP and run it’s course.