The meaning of the wheel

In reading Ṭhānissaro Bhikkhu’s Saṃyutta Nikāya I came across an interesting tidbit in a footnote to the Dhammacakkappavattana Sutta:

The discussion in the four paragraphs beginning with the phrase, “Vision arose…,” takes two sets of variables — the four noble truths and the three levels of knowledge appropriate to each — and lists their twelve permutations. In ancient Indian philosophical and legal traditions, this sort of discussion is called a wheel. Thus, this passage is the Wheel of Dhamma from which the discourse takes its name.

I have tried (perhaps not very well) to find an example of this kind of wheel in ancient Indian philosophy or law. Does anyone know of a source that goes into more detail on this kind of cakka?

There is also the wheel of Samsara. An Arahant is one who has utterly smashed out the spokes of that wheel; freeing the hub from the “round” of rebirths.

wheel of the Dhamma in motion

I think the setting in motion is important, as a quality of a wheel - no one being able to stop it, is said to be a desirable aspect of it.

When you say “wheel of samsara” do you mean the bhava nidana in dependent origination? There is also the Tibetan wheel of life, though I don’t think the EBT support this view of DO as circular.

It’s interesting that Dhamma is portrayed as something moving, as opposed to something fixed and static. Is there a sense in which we practitioners keep it moving?

@Martin The Buddha set it in motion by teaching the dhamma, in one sense. By not breaking through samsara, the motion of the wheel of rebirth continues, in another sense.

Anyone know anything about the sense in the footnote above?

I came across the Cakkha Sutta, in which turning wheels are likened to fortuitous conditions. I assume this is because turning wheels make it easier to travel where you want to go, which would also work with the wheel of Dhamma:

Also note the significance of this extract from the Wiki article on the derivation of “dukkha”:

"The word is commonly explained as a derivation from Aryan terminology for an axle hole, referring to an axle hole which is not in the center and leads to a bumpy, uncomfortable ride.

According to Winthrop Sargeant, The ancient Aryans who brought the Sanskrit language to India were a nomadic, horse- and cattle-breeding people who travelled in horse- or ox-drawn vehicles. Su and dus are prefixes indicating good or bad. The word kha , in later Sanskrit meaning “sky,” “ether,” or “space,” was originally the word for “hole,” particularly an axle hole of one of the Aryan’s vehicles. Thus sukha … meant, originally, “having a good axle hole,” while duhkha meant “having a poor axle hole,” leading to discomfort."

Dukkha (/ˈduːkə/; Pāli; Sanskrit: duḥkha) is an important Buddhist concept, commonly translated as "suffering", "pain", "unsatisfactoriness" or "stress". It refers to the fundamental unsatisfactoriness and painfulness of mundane life. It is the first of the Four Noble Truths. The term is also found in scriptures of Hinduism, such as the Upanishads, in discussions of moksha (spiritual liberation). Dukkha (Pali; Sanskrit duḥkha) is a term found in ancient Indian literature, meaning anything that...

according to Monier Monier-Williams, the actual roots of the Pali term dukkha appear to be Sanskrit दुस्- ( dus- , “bad”) + स्था ( stha , “to stand”).[12]Regular phonological changes in the development of Sanskrit into the various Prakrits led to a shift from dus-sthā to duḥkha to dukkha .

I agree however that there’s the sense ‘du’- being bad or disagreeable in both explanations.

The ‘cycle’ of samsara refers to the ‘repetitive’ nature rather than an actual cycle, as otherwise those enlightened will have to begin all over again after a long period of time, and the Buddha’s teachings would be ineffective.

I suppose I’m referring to “the round of rebirths” - as well as a translation of “Arahant” that reads “spoke destroyer” (from Buddhaghosa, if I’m not mistaken - I might be. Maybe an old Conze book - can’t recall).

I think samsara is more like a game of snakes and ladders.

Cakka i.e. “wheel” is a common term for this kind of “round” of permutation. They’re found fairly often in the suttas, much more in the Vinaya, and make up most of the Abhidhamma. I’m not sure exactly when this technical literary term came into use, but I can’t recall it in any early text. It’s not exactly an easy term to search for!

This is given in meaning 4 of the NCPED, and a couple of references (in abhidhamma) are given in the PTS dict, so my guess would be it originated as a term in the Abhidhamma.

It seems that wheel is a cognate of cakka (perverse, I know, because they don’t look alike at all!).

From the Oxford English Dictionary (copy-pasting does not preserve every symbol, see the image below for the highest accuracy): 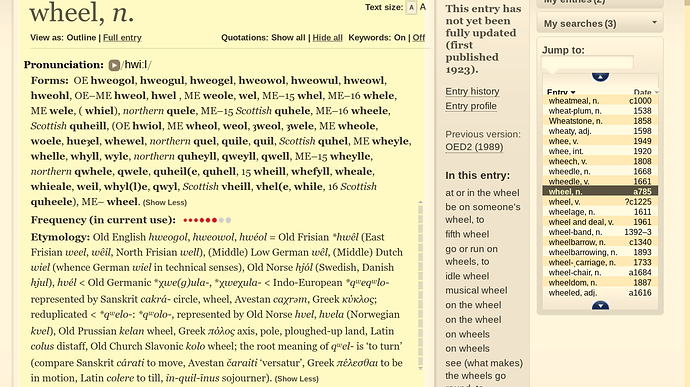 PS: Can also look into some other interesting words now that I have OED access! Any requests?

It seems that wheel is a cognate of cakka (perverse, I know, because they don’t look alike at all!).

A parallel etymological development is PIE *kʷékʷlos → Greek κύκλος (kúklos → kyklos → ciklos), borrowing into Latin as cyclus giving us the French cycle from which English inherits this word, cycle, during the Norman Invasions.