A few years ago I read this article by James Giles, who is a Canadian philosopher. I’d be interested in hearing your thoughts on it.

The no-self theory is not a theory about the self at all. It is rather a rejection of all such theories as inherently untenable.

Glad you asked, said the guy with the Hume avatar. Hume seems to have written something quite close to not-self independently of Buddhism. To quote Hume:

I may venture to affirm of the rest of mankind, that they are nothing but a bundle or collection of different perceptions, which succeed each other with an inconceivable rapidity, and are in a perpetual flux and movement.

58. Bundle Theory and the Five Aggregates

It seems strange that there could be a connection between the thought of an 18th Century Scottish philosopher and the prophet and founder of Buddhism, yet in the realm of personal identity, the vie…

Thanks for the link. The blog post quotes Could David Hume Have Known about Buddhism? by Alison Gopnik; an interesting read in itself.

At least, we have to give up the apparently obvious assumption that Hume could not have known about Buddhism in the 1730s

Parfit is one of those who fail to distinguish between the eliminative no-self theory and reductionism. Consequently, he mistakenly thinks that the Buddhist position supports his reductionism.

One thing that is interesting about Hume is that, despite having a theory of mind that is in many ways similar to the Buddha’s, he had a general moral outlook on life that was radically different. Hume was a worldly philosopher with a generally very positive outlook on commercial society and what the Buddha denigrated as the dusty household life. The Buddha was an ascetic world-renouncer, but Hume was a politically engaged bon vivant, who was contemptuous and dismissive of asceticism and mocked what he called the “monkish virtues”. 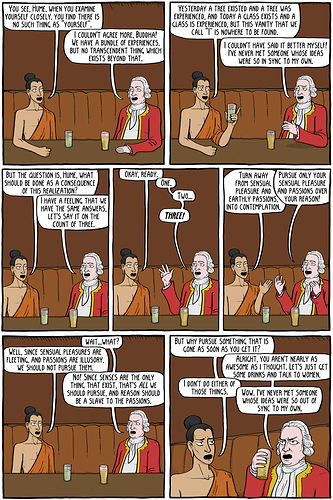