The Range of Self

Raised in a non-Buddhist cultural milieu, mainline Protestant Presbyterianism, I am familiar with numerous soul-theories coming therefrom. The strict theological view of the self in Protestant Christianity is that the mind/soul/spirit is inseparable from the body. This is why there will supposedly be a “bodily resurrection.” People need to enjoy heaven and witness the judging with their bodies – their eyeballs, ears, etc. Jesus has a physical resurrection in these kinds of Christianity (the only kinds of Christianity where Jesus doesn’t have a physical resurrection are Gnostic, Arian, or modernist like the Swedenborgians and some Mormons). Contrast this with Catholicism and Eastern Orthodoxy, where there is a folk notion that the dead enjoy a foretaste of either heaven or hell after death, disembodied, before their resurrection. In my experience, this folk doctrine of “the saints are already in heaven, like Jesus and Mary” has a tendency to seep into various kinds of Protestantism as well regardless of the fact that it is doctrinally incoherent there. In my experience, most people don’t really care about doctrine generally regardless of the religion. That can be a good or bad thing.

Why is this relevant? It’s such an aside that I felt it pushed the entire discussion into “Watercooler.”

When the “soul” is resurrected bodily, it is a “glorified body.” It is not like your or my bodies. It is a resplendent deva-body bereft of the godly mortality that is believed to be in Buddhadharma. Immortal, stainless, etc. The bodies of the saints are said to be wonderful and exempt from decay.

Let’s say that a Christian is in a terrible accident and suffers a traumatic brain injury. “The resurrected body-mind will not be impaired in heaven” is the dominant idea. “I will hear in heaven,” says Beethoven of his deaf state due to his damaged organ. “Timothy won’t have autism in heaven,” says a mother to another in a congregation. “You will walk in the Kingdom of God,” says a preacher to a boy born without legs. The common assumption here is that a person is fundamentally undamageable, unaffectable, unchangeable in some mysterious way, perhaps even “perfect from birth” mysteriously. When Adam suffers his traumatic brain injury and loses the ability to relate to other people, they say that his mind will be restored and indeed “in some mysterious way” is undamaged.

But this goes much deeper than naïve beliefs about afterlives. When I decide to smoke a cigarette, it is only because some part of me convinces another part of me to be in denial that I will get cancer. “Maybe you’re special” that part of the mind says, “Maybe nothing will happen to you.” “Maybe you’re the exception!” I never actually think this to myself. I am talking about deep unconscious processes that we don’t consent to with our waking minds – unconscious processes like an area of the brain saying “Why isn’t there as much nicotine in here as there used to be? That stuff’s fun,” and then the later process of justification, “Well, maybe the one won’t hurt.” Won’t it indeed.

These are two kinds of “selves.” One is the soul-self, the other is the “maybe you’ll be fine” justification process that bridges the unconscious and conscious and goes into most bad decisions generally.

There are more yet. The Son had his Father, Mahāvīra had his Jīva, John the Baptist had Manda ḏHayyē, Kṛṣṇa had Viṣṇu, and Mānī ḥayyā had his Paraclete. There are users here who believe that they have “divine twins” of upper sources from which they have emanated. We can substantiate this if we want, but it would be embarrassing to the people who hold such doctrines so I am against it. You can find them here. The “divine twin” is your “perfect self” or your “true self” who is prefigured either within or without. Sometimes people think of their “true self” as something they already are that they have to work towards “truly becoming.” Some people think of their “true self” as someone who sends them transmissions and visions and knowledge from the beyond. In the Christian Gospels, Jesus is depicted as having a “higher self” which he shares a degree of identity with but is also separate from, namely “the Father.” He leaves the disciples to go out alone and commune with the Father and pray and communicate. John the Baptist, the founder of the Mandaean tradition of Gnosticism, had a similar “higher self” from the Lightworld emanated from the Divine Pleroma. The founder of Manichaeism, Mānī, believed himself to be the earthly counterpart of the heavenly Paraclete that Jesus prophesied that the Father would send. At his 12th and 24th birthdays, this founder of religion reports being contacted by his divine counterpart and that divine counterpart revealing to him the true identity of both of them. All of these figures claim to receive transmission and guidance from a godly, celestial, or angelic form of themselves who they later “merge” with in an act of apotheosis, thus becoming themselves perfect when before only their divine twin was the perfect one, the immortal one, the unchangeable. The Rgvedic version of this is the tree of Jīvātma in the Rgveda samhita 1.164.20-22, the Mundakopanishad 3.1.1-2, and the Svetasvataropanisad 4.6-7. There are two birds, one is the soul and one the incarnations. One watches, the other eats, breeds, dies, is born, etc.

More subtle yet is the “brain homunculus.” In my experience, this kind of thinking is ubiquitous, but particularly strong with people who do a lot of psychedelics. When you’re on a really nice psychedelic, your brain functions stop working together like they ought to and just sort of go on their own trip. It is like “swimming in a sea of yourself.” It is easy to get the misconception that you are like an immoveable buoy in such a sea. Leaving the “psychonaut” community, the reason why it is so easy to misconceive of yourself as a solitary observer amidst a sea of “mind activity” or “brain activity,” whichever we prefer, is because this is already a ubiquitous misconception.

Here is an article on the brain homunculus and the fallacy of infinite regress it suggests: 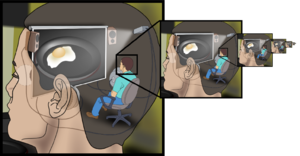 The homunculus argument is a fallacy whereby a concept is explained in terms of the concept itself, recursively, without first defining or explaining the original concept. This fallacy arises most commonly in the theory of vision. One may explain human vision by noting that light from the outside world forms an image on the retinas in the eyes and something (or someone) in the brain looks at these images as if they are images on a movie screen (this theory of vision is sometimes termed the th Th...

The experience of seeing and hearing is such that one cannot see one’s own eyes (without a mirror) or hear one’s own ears (although they do indeed make a sound!). The experience of seeing is somewhat like being a paradoxically disembodied-yet-embodied television screen located “somewhere in your head.” The body moves and the “screen” moves because your eyes are changing position relative to things around you. Most naïve conceptions of afterlives are dependent upon the idea that this “screen” will continue to display once the eyes are dead and that it will be able to move about despite the body not moving with it. “The homunculus who pilots the mind will keep on trucking,” is the idea here, “even after the body is naught.”

What other permutations of self-theories can we outline? “Belief in self,” as I hope I’ve at least somewhat shown above, is not actually one particular set of beliefs. It is all-encompassing in that it affects the worldling’s every interaction with the world and is often unconscious, not consciously assented to as a philosophical stance such as “There is a self” or “The self is Y” etc.

All of these are still based on one particular belief or assumption, namely that there is some part of your or correspondent to you that is blissful, eternal, constant, etc., but what I am trying to stress is that people can have “the notion of self” without consciousness intellectually acknowledging that, and that multiplies the belief or assumption. These all have a core that links them, but in their manifestations they are quite varied. It is actually more “normal” to not acknowledge one’s naïve self-views than to acknowledge the (because when examined they are often so naïve that it is internally embarrassing). Indeed, that is one of the most pernicious elements of wicked self-view. That is why it is “wicked.” It “lies” to us, in a manner of speaking. It says, “I’m not a naïve ātma worldsoul doctrine. I’m not a self.”

Almost always, people hold these positions without consciousness assenting to “This is a belief that I hold.”

The “atma” is “life-spirit” much the same that God supposedly “breaths” a holy spirit into the clay to make Adam. It etymologically is derived from the PIE root for breathing and breath. This makes sense. Breathing? Animation. No breathing? Dead. Very intuitive for an ancient human mind. “Spir it” itself is a sophisticated word for “breath.” We “aspir ate” an breath goes out, related to the a- prefix. We are “inspir ed” and it is like a high power has “breathed something into” us, the “into” being the in- prefix. Yes, this is linguistics, and etymology is not meaning, but it also isn’t random why we use “spirit” for all these things.

Another way the association of mind/spirit/breath is ubiquitous in human religion. In some Hinduisms and Buddhisms, the mind itself is a modality of the air element, traveling in “channels” through the body, animating it with action caused by volition. In these traditions, breath-mindfulness as “observing the mind” takes on a new level of literalness.

Another soul theory, one last one, that comes to mind. The id-ego-superego matrix of Freud. An even more primitive version of this basic idea is just “your conscious” portrayed as a literal foreign discursive entity that speaks to “you” inside your head from amidst the discursive voices of your own thought. The “conscious” speaks to the homunculus who pilots the brain, one assumes, like Jiminy Cricket chatting with Pinocchio.

So rather than being a particular one “view of selfhood,” “self-view” is actually extraordinarily polyvalent and manifests as all sorts of beliefs, doctrines, etc., he said to no one’s surprise.