The stepping or pulling of hair of Brahmins

I know this was probably never found.

I found this in Ekkottara

But it made me realize that the whole point in early Buddhism is that Bodhisatta is someone that turn the wheel of the damma. So this probably attracted Asoka to Agamas. But this sutta is interesting also because Buddha Dīpankara is said to step on the Brahmin hair. And Brahmin bowing down. How do you see this? Because to me it seems a lot similar to other suttas. For example the Potter touching the Brahmin by the hair to go Buddha Kassapa. This theme is constantly used as a shocking thing. Because it a offense for Brahmins.

Yes. I will edit. I think I searched in Fragments of Mahayana book in google and first words found on small kings called has various ways ending . They are shorter. Some end with sotva. Based on early local language around where Buddha lived. But they are all after Christ. There is one text in suttacentral translated as bodhicitta. Is it the same word? 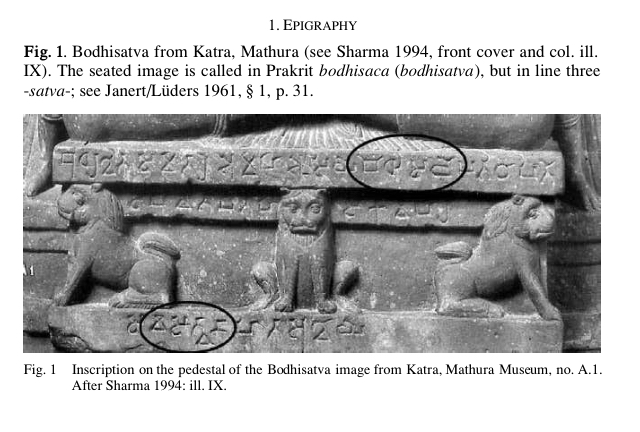 Maybe bodhisaca just comes from Budhasa. Or the opposite… this is confusing. A statue with two languages. I think based on other inscriptions in Amaravati. They are early on Bodhasa. So I think Bodhisatta was just a later invented word. In suttanipata the story of Buddha birth. A deva says A bodhisatta has been born. Scholars all giving their opinion about this statue inscriptions. Which is probably not shocking. Seeing other early ones. And if a statue of Buddha was Bodhisaca in pakrit. Sanskrit Bodhisattva. And I read somewhere else is written Budhasa. It clarifies that the word is misunderstood. Maybe sanskrit Created the word.

Please note. This forum is for the exploration of EBT’s.