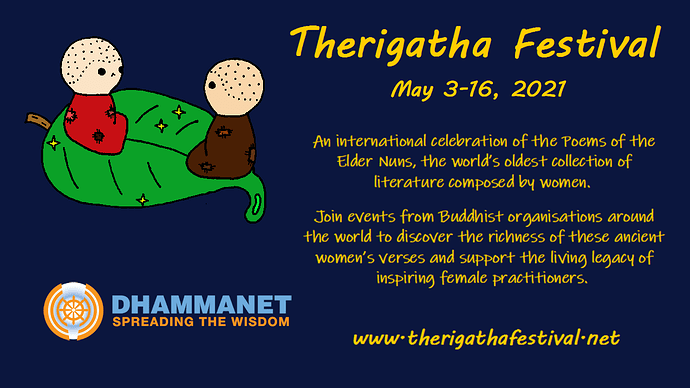 Daily episodes of “Finding Sanctuary”, a series of discussions between bhikkhunis / renunciate women about the poems, as well as dhamma talks, interviews, and panel discussions with younger, middling, and senior monastics.

We’re also inviting monasteries and dhamma centers around the world to join the festival by hosting their own Therigatha-themed event, and share with us their live-stream link or recording. Deadline: April 25th.

Celebrate the Wisdom of the Ancient Bhikkhunis

Please help us spread the word by sharing our website and posters on your social media, website, newsletter, etc. 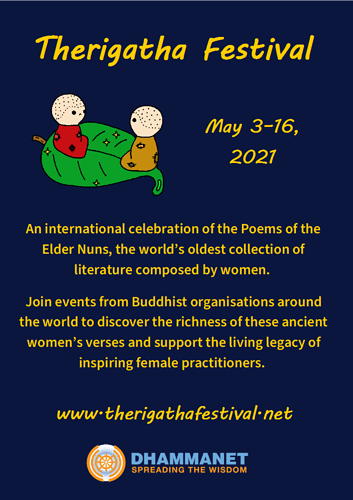 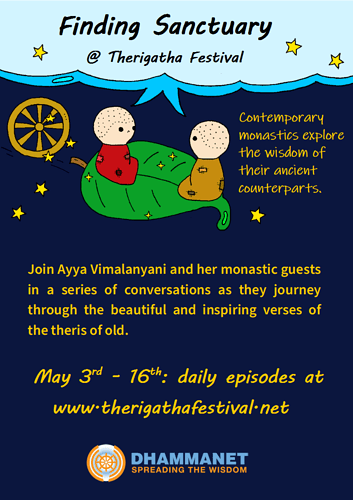 This is such an exciting initiatlve. It seems to be conceived as a Dhammanet pan-global event at around twelve months after their first one, the pan-global 24hr chanting when Covid first hit.

And this is a Wonderful Thing, to have the poems of the Ancient Bhikkhunis celebrated in this way.
Sadhu! Sadhu! Sadhu!

Between admitting these posts from a brand-new forum member (Welcome, The Therigatha Festival, to the Forum!) I got caught up researching someone who I don’t know on this forum: Ayya Kusuma. If you don’t know who she is, the first modern Bhikkhuni, please read at least this link and celebrate her courage. I mean … well … WOW!!! …
Sadhu. Sadhu. Sadhu. 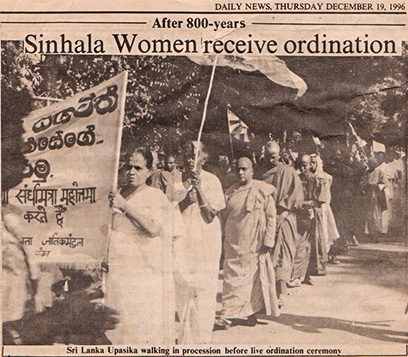 Bhikkhuni Kusuma How I Became A Bhikkhuni

Bhikkhuni Kusuma How I Became A Bhikkhuni

Ayya Kusuma. If you don’t know who she is, the first modern Bhikkhuni, please read at least this link and celebrate her courage. I mean … well … WOW!!! …

She’ll give a talk on “How the Therigatha inspired me to re-establish the Theravada Bhikkhuni Sangha”.
She also shared her own translations of Therigatha poems with us, which we’ll make available in the next few days.

Bhikkhuni Kusuma, Ph.D. (91 years of age) is a fully ordained bhikkhuni from Sri Lanka who has pioneered the re-establishment the Theravada Female Buddhist Order in Sri Lanka, 1000 years after the Order died out. She has taken upon herself the task of carrying on the efforts of her mentor, Sister Ayya Khema , in establishing the Ayya Khema International Buddhist Mandir in Sri Lanka. She currently lives at Prajapati Meditation Centre, Batawala, Padukka, Sri Lanka.
Bhikkhuni Kusuma started her career as a science teacher. In 1969, won a scholarship offered by The National Science Foundation and Asia Foundation of USA to study for a MSc in Molecular Biology in the University of Indiana, USA. She was disappointed that science had no answer to her question “Why are we born?” and came back to Sri Lanka and joined the staff of the University and did her MA and Ph.D. in Buddhist philosophy. She reads Pali – the spoken word of The Buddha. At 69 years she became a Bhikkhuni. She has written many books.

Many new events have been added to our website!

Help us spread the word about the festival by sharing our website therigathafestival.net and promoting our posters (above) on social media. 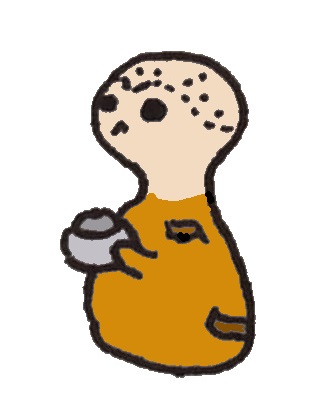 Sadhu Anumodana. It is indeed a step in the right direction